“Right now, the monsoon is 12 percent below average and dropping, and [India is] headed for a pretty serious dry season,” said a researcher. 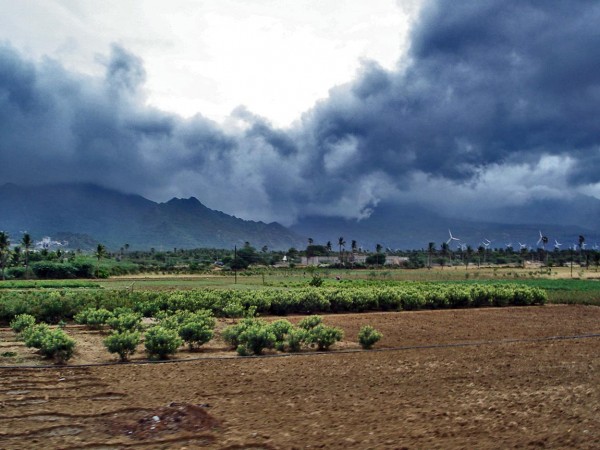 Advancing monsoon clouds and showers in Aralvaimozhy, near Nagercoil, India. A new study finds that focusing on El Niño and La Niña’s impacts on the monsoon in regions and sub-seasons—instead of all-India for the whole monsoon season—may improve rainfall forecasts. Image via PlaneMad/CreativeCommons/ AGUBlogosphere.

Katy Human at the AGUBlogosphere reported this week on a study of India’s 2015 monsoon. She wrote that, across key breadbasket regions of India this monsoon season, not enough rain is falling and quoted Balaji Rajagopalan at the University of Colorado Boulder – who has been studying the relationship between El Niños and India’s monsoon – as saying:

Right now, the monsoon is 12 percent below average and dropping, and they are headed for a pretty serious dry season.

The rainfall deficits are even greater in some areas where food grains are grown, and that means hardships for many people.

Rajagopalan and his colleagues have spent several years dissecting the relationship between El Niño and La Niña and monsoonal rainfall in India. El Niño is an upwelling of unusually warm water in the Pacific Ocean. It typically peaks in late December in years when it occurs. There is an El Niño building now in the Pacific that many believe will be a whooper, rivaling the record-breaking 1997-98 El Niño, which created weather extremes in many places across the globe. Katy Human wrote in her blog that, according to conventional wisdom, in India:

However, climate is complex, conventional wisdom doesn’t always carry the day. Balaji Rajagopalan and colleagues found a few years ago – during the 1997-98 El Niño – that India’s monsoon season was nearly normal. That year, the El Niño signature warming over the Pacific was strongest in the eastern Pacific. Rajagopalan said:

We found that if El-Nino-related warming is in the central Pacific, there’s a much bigger drying impact on India.

These researchers also found that the impact of El Niño varies by region of India and by sub-season. Specifically, Human wrote:

Rainfall over the Indo-Gangetic plains and central India is more sensitive to Pacific sea surface temperatures during the early season (June).

In parts of northern India, rainfall is sensitive to sea surface temperatures throughout the monsoon season.

El Niño and La Niña do not have symmetric effects. Especially, El Niños tend to suppress rainfall more in the peak of the monsoon season (July-August) over much of India than La Niñas enhances it, which has been the case this year.

It’s too early to tell whether India’s current monsoon, coupled with the El Niño now building in the Pacific, will in fact lead to an abnormally dry season for India this year. Last April, the Indian Meteorological Department (IMD) was already predicting a “below normal” monsoon for 2015, based on the typical El Niño weather pattern; at that time, signs of an El Niño were just beginning to show in the Pacific. If it is a very dry year for India, it’ll be the second consecutive one. Cnbc.com quoted Indian economist Sonal Varma as saying:

Monsoon rains are especially important this year as the agrarian economy is still reeling from the adverse effects of below-normal rains in 2014 and unseasonable rains in March of [2015].

Bottom line: Rainfall deficits in India – coupled with the building El Niño in the Pacific – have some experts predicting another year of below-average dryness for India’s farmers this year. According to researchers, the impact of El Niño on rainfall in India in the coming months may vary by region.