Incredible videos of a tornado striking near Milan, Italy

Incredible must-see footage of a tornado sweeping near Milan, Italy on July 29, 2013.

A strong storm system swept through Italy yesterday (July 29, 2013). One of the areas hardest hit was near the city of Milan, the second-largest city in Italy. The tornado ripped roofs off homes and injured at least 12 people, according to numerous media reports. Check out these amazing videos posted via social media yesterday. Reminder: Always take shelter and move into the lowest floor and most centralized part of the building away from windows when a tornado is approaching you. The people filming these videos could have easily been injured or killed. Great footage, but not a best practice when a tornado is coming!

The video below is probably the most startling tornado debris video I have seen in years. Never stand near a bank of windows when a tornado is sweeping past outside. It’s clearly too dangerous. Scary footage!

The video below was sent in via Youtube by Boly Krizsi: In the next video, below, several people were caught off guard as the tornado swept into the lot. 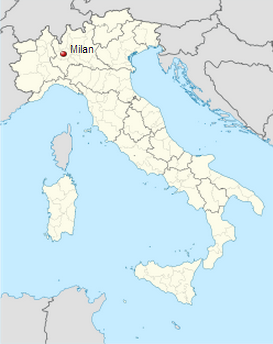 While tornadoes are rare anywhere on the globe, they are not completely uncommon during this time of the year for Italy. Late spring into the summer months are when we typically see tornadoes in Italy.

Italian tornadoes typically peak in August according to a study about the climatology of tornadoes in Italy.

Bottom line: A tornado caused significant damage near the city of Milan, Italy on July 29, 2013. At least 12 people were injured. The videos in this post are amazing, and scary.