Video capture by a drone of dense fog with zero visibility on Tuesday, December 9, in Dallas, Texas. Amazing visuals!

What happens when it’s so foggy outside, you can’t see anything? Simple. You grab a drone, fly it into the air and use it to capture some amazing video. Mike Prendergast posted an aerial view of today’s dense fog – December 9, 2014 – in Dallas, Texas. The footage is incredible. Check it out above!

On Tuesday, December 9, a dense fog advisory was issued for parts of the Dallas/Fort Worth area. Visibility was less than a quarter of a mile across a good bit of northeast Texas. According to observations at the Dallas/Fort Worth International Airport, visibility dropped to zero for three hours from 7 to 10 a.m. CST. In conditions like this, it’s nearly impossible to drive.

The fog continued after 10 a.m. CST, so the National Weather Service at Fort Worth extended the dense fog advisory until noon.

The fog was so dense that it affected flights out of the Dallas/Fort Worth International Airport. Several delays were reported as runway visual range showed airfield visibility down to 700-1000 feet. 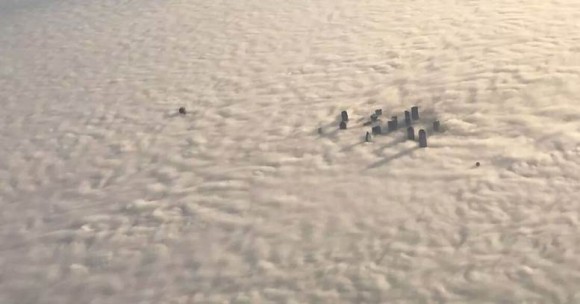 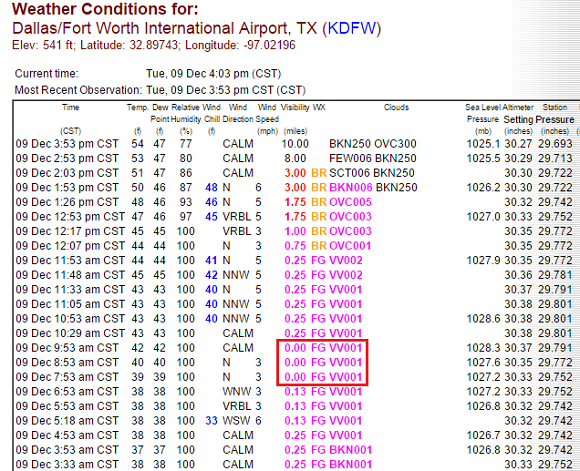 Zero visibility was reported in Dallas/Fort Worth on December 9, 2014. Image Credit: NOAA 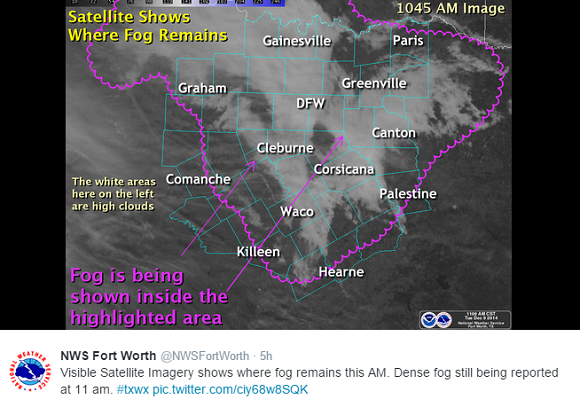 NWS Fort Worth tweet showing the fog from satellite imagery.

Bottom line: What do you do when you have a drone and a ton of fog? If you do what Mike Prendergast did, you’ll capture amazing footage in high definition of a rare sight to see.