Incredible images of hail in U.S. in March 2012

This March, we in the U.S. have seen some dynamic storms produce large and copious amounts of hail. How hail forms and some great images.

For the Northern Hemisphere, March 1 marks the beginning of meteorological spring. In a way, you can look at spring as the transitional period of weather that goes from winter to summer.

During this transitional period, we typically see large swings in temperatures and an increase in warmer temperatures through time. When two air masses clash, thunderstorms can develop. Because of this, spring is typically the season for severe weather. For parts of the United States, there have been very impressive storms that have produced quite a handful of extraordinary hail cases. During the month of March 2012, Hawaii has broke a hailstone record and people of North Carolina and Virginia were literally shoveling hail off driveways and roads. 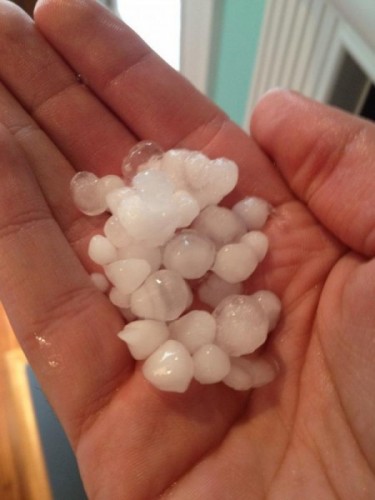 Hail is a form of precipitation that occurs when updrafts in thunderstorms carry raindrops upward into extremely cold areas of the atmosphere where they freeze into ice. There are currently two ideas of how hail is formed in a thunderstorm.

Another idea behind hail formation is that supercooled water may accumulate on frozen particles near the back-side of the storm as they are pushed forward across and above the updraft by the prevailing winds near the top of the storm. Eventually, the hailstones encounter downdrafts and fall to the ground. 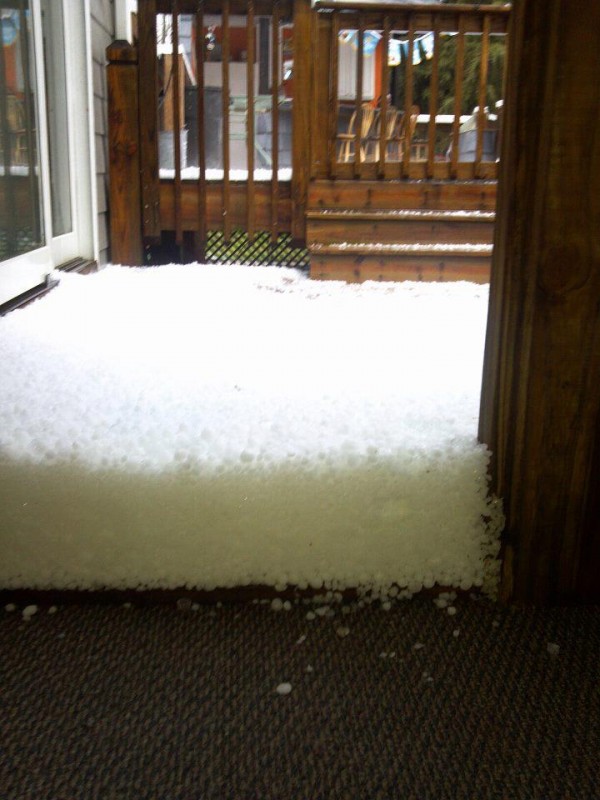 On Saturday, March 24, 2012, an upper level low was pushing east into North Carolina and Virginia. There was enough instability and cold air aloft that the storms that did form produced a decent amount of hail. In the image above, taken by Michelle Dix Corvin at Smith Mountain Lake, hail was so extreme that it accumulated around six inches or 15.2 centimeters on their deck. Many areas reported hail around nickel to golf ball size. On this day, nearly 100 hail reports were received from South Carolina to Virginia as supercell thunderstorms developed across the area. 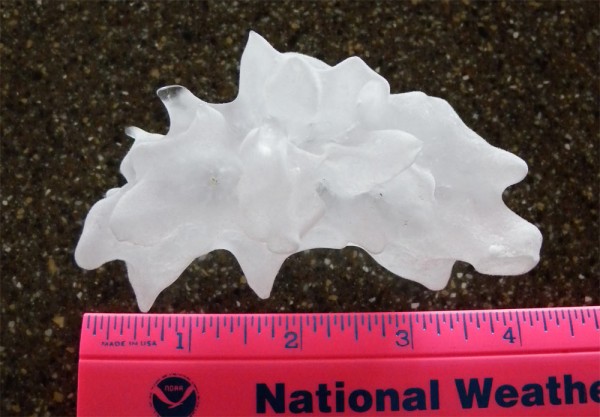 In Hawaii, on the morning of March 9, 2012, a rare supercell thunderstorm developed over Windward Oahu which produced large hail across Kaneohe and Kailua. Hail reports of two to three inches in diameter was common in these areas as the supercell parked itself over these areas. A resident in the Aikahi Neighborhood reported a very large hailstone larger than three inches. After looking at the hailstone, the NWS reported that it was four and 1/4 inches long and two inches wide. It broke the record for largest hail stone ever reported in the state of Hawaii. The previous record was set back in 1950 with one inch in diameter!

Bottom line: For the month of March 2012, we have seen some pretty incredible hail shots. Hawaii broke a state record with a hailstone four and 1/4 inches long and two inches wide. Across North Carolina and Virginia, storms on March 24, 2012 produced an accumulation of hail across the area. Some places actually had to shovel the snow off their driveway and the roads. As we move into the heart of the severe weather season, we will likely see more reports of large hail as storms are more powerful and can contain stronger updrafts. Hail can be very damaging, especially for vehicles and roofs. Let’s hope for a less active severe weather season for spring 2012.