In the U.S. East? Look for commuting problems due to storm

If you have travel plans to U.S. East for Thanksgiving, look for flight delays, possible cancellations, and longer commutes. Weather will go downhill throughout the U.S. East on November 26-27, 2013.

An area of low pressure across the southeastern United States is producing heavy amounts of rain and will push off to the northeast and affect the U.S. Mid-Atlantic and Northeast through Wednesday evening. If you have plans on traveling out east for Thanksgiving, you will need to be prepared for flight delays, possible cancellations, and longer commutes on the roads as the weather will go downhill throughout the U.S. East on November 26-27, 2013. 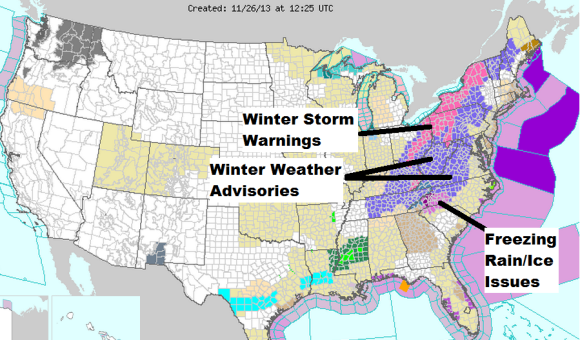 Local National Weather Service offices have issued various watches, warnings, and advisories as an area of low pressure pushes along the eastern part of the U.S.. Image via NOAA.

An area of low pressure across the U.S. Southeast is generating ample amounts of rainfall. Many locations could see up to 2-3 inches of rain with higher amounts in localized areas. As the area of low pressure moves up the U.S. East coastline, it will wrap in colder temperatures and produce a freezing rain/sleet/snow mix across the Appalachian Mountains Wednesday and it will spread northward into parts of West Virginia, western Pennsylvania, and in and around the Great Lakes.

Forecast snow totals will likely climb to 8-12 inches, especially near or around Syracuse and Buffalo. The largest airports such as Atlanta, Washington D.C., and New York City will likely experience delays, but snow/ice is not the main threat for those along the coast thanks the track of the area of low pressure providing these larger cities with warmer air.

Wind and rain is the main threat along the coast.

Potential rainfall totals over the next two days across the eastern United States. Image via Weather Prediction Center

This is the same storm system that is responsible for producing icy and snowy weather across parts of Oklahoma and Texas over this past weekend. Another story that will be associated with this system is the cold air and windy conditions that it will bring along the U.S. East coastline as it pulls away. 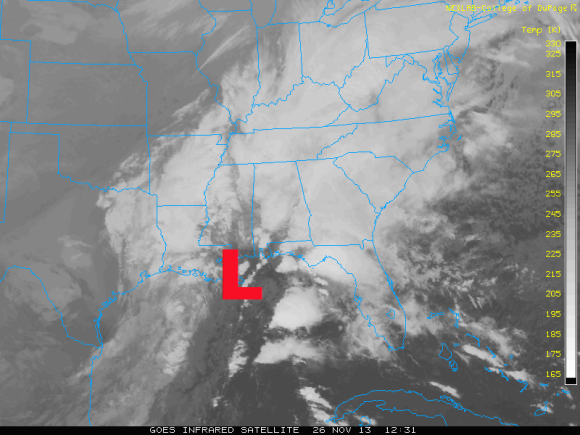 Infrared satellite image of the storm brewing in the U.S. Southeast on November 26, 2013. Image via GOES/College of Dupage

Bottom line: If you plan on traveling out to the U.S. East for Thanksgiving, you might encounter delays or cancellations as a strong area of low pressure produces heavy rain, gusty winds, and even wintry precipitation all along the coast. If you plan on driving anywhere along the Appalachian Mountains, be aware that ice could be a major threat and commuting on the roads is not advised during the event. As the storm lifts to the northeast, it will likely wrap behind it snow, colder temperatures, and windy conditions as far south as Alabama and Georgia and northwards into the Northeast.