Some parts of the United States saw temperatures 20 to 40 degrees above average in March 2012.

Take a look at a time lapse of the record breaking temperatures that occurred across the United States throughout March 2012: 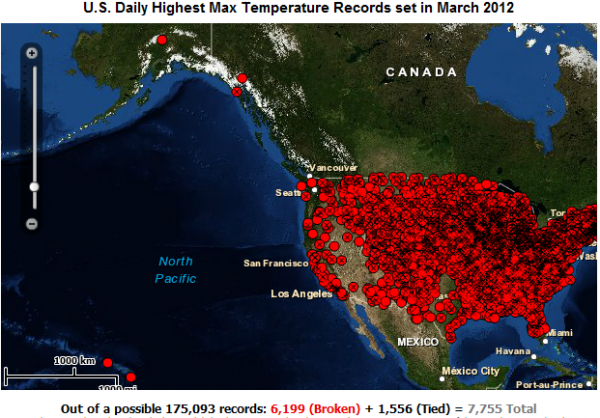 7,755 record high temperatures were tied or broken during March 2012 in every state. This includes Hawaii and Alaska! Image Credit: NCDC

Here’s the amazing fact regarding the record warmth: According to the National Climatic Data Center, the average temperature for the contiguous United States was 8.6 degrees above the 20th century average. Since record keeping began 117 years ago, only one month, January 2006, seen a larger departure from its average temperature than March 2012. Exactly 15,272 warm temperature records were broken.

7,517 daily highest minimum (nighttime) temperatures were either tied or broken across the United States in March 2012. Yes, this includes Hawaii and Alaska. Image Credit: NCDC

In 2012, 25 states east of the Rocky Mountains experienced their warmest March ever recorded. Check out some of the individual reports showing the record warmth for the month of March 2012 from various National Weather Service offices across the United States:

Why was it so warm?

Temperatures across the the North-Central Plains were seeing temperatures typically seen in the early summer months with temperatures nearly 30 to 40 degrees above average. The main explanation has to do with the synoptic or large-scale setup that occurred during the month of March. A large area of high pressure was situated east of the Rocky Mountains. Across the Pacific Northwest, a series of storm systems and troughs were digging across the area. The pattern was rather stagnant as nothing was able to push the area of high pressure out of our area. The warm temperatures pushed as far north into Canada. According to NOAA, a strong low level southerly jet was initiated and sustained by the greatly enhanced west-east pressure gradient between the abnormal low pressure over the western U.S. and abnormally high pressure over the Northeast United States. This feature was probably the single most critical factor responsible for the extreme magnitude of the heatwave. By late March 2012, the pattern finally budged as an upper level low pushed east and brought cooler temperatures.

Temperature anomoly across the globe. Note the colder temperatures in Asia and Alaska with the extreme warmth across the continuous United States and Canada. Image Credit: NCEP/NCAR

Was global warming, aka climate change, responsible for this massive heatwave that occurred across the United States in March 2012? The best answer I can give you at this time is that – in a warming climate – extreme events such as heat waves, droughts, floods, and massive snowstorms are expected, as our atmosphere adjusts to an increase in greenhouse gases. However, we cannot specifically blame global climate change for the March 2012 U.S. heatwave. Whenever a significant weather story is released via the news, media erupts with stories on both sides of the global warming story. Some point to global warming as the cause of the event. Others just as loudly point to climate extremes from the past, and, in the case of the March 2012 U.S. heatwave, exceptionally cool temperatures on other parts of the globe. At this writing, the global picture for March 2012 from the National Climatic Data Center is not out yet, but look here. Maybe it’s out as you read this post.

The fact is that neither side of the media controversy (it is not a controversy among climate scientists, who almost unanimously agree Earth is warming) knows whether global warming caused the March 2012 U.S. heatwave. Perhaps it’s not even sensible to speak of a global cause of a local weather event, at least not until more time passes and we see the overall trends – and so can look back with hindsight. Remember, climate is defined as how the atmosphere behaves over relatively long periods of time. Weather is something that changes from day to day.

Weather is not climate. Meteorologists can use climatology for a specific area to get a grasp of the general weather that typically occurs for a location at that time of year. But, for example, recently as I have made forecasts, I have had to ignore climatology because the weather is not fitting the norm at this time.

With all of that said, if we continue to see such extreme events in the future, the long-term trends could indicate climate change. So the overall answer is this: we cannot blame global warming for the March 2012 U.S. heat wave. During March 2012, other areas around the globe were experiencing very cold temperatures. However, in a warming climate, extreme events such as this heatwave (and even colder than normal temperatures) can be expected.

According to Climate Central,

Record daily highs have been outpacing record daily lows in a pattern that has been shown to be inconsistent with natural climate variability alone. So far in 2012, the daily record-high to record-low ratio has been about 17-to-1. For monthly record highs compared to monthly record lows the ratio has been a lopsided 33-to-1 in favor of warm temperature records. If the climate were not warming, one would expect the ratios to be, on average, closer to 1-to-1.

Bottom line: March 2012 goes down in history as the warmest March across the contiguous United States since record-keeping began. Temperatures were 20-40 degrees above average in states such as Minnesota, South Dakota, North Dakota, and Illinois. Twenty five states east of the Rocky Mountains experienced their warmest March ever recorded. There were 15,272 warm records broken during the month of March 2012. The main feature that created this extreme warmth was an area of high pressure that dominated the weather east of the Rocky mountains providing warm, southerly winds to push far north into parts of Canada due to the jet stream that positioned along the United States/Canada border. For this time of the year, the jet stream is typically further south. We cannot exactly say that the record warmth was caused by global warming, but in a warming climate, extreme events such as the March 2012 U.S. heatwave are expected to occur more frequently, according to climate scientists.