In early May, unrest at several volcanoes

Several volcanoes erupted during the first week of May, 2013, including Mount Cleveland, the Mayon Volcano and Popocatépetl.

Eruptions occurred at several volcanoes during the first week of May, 2013. Volcanoes with heightened activity include Mount Cleveland in Alaska, the Mayon Volcano in the Philippines and Popocatépetl in Mexico. 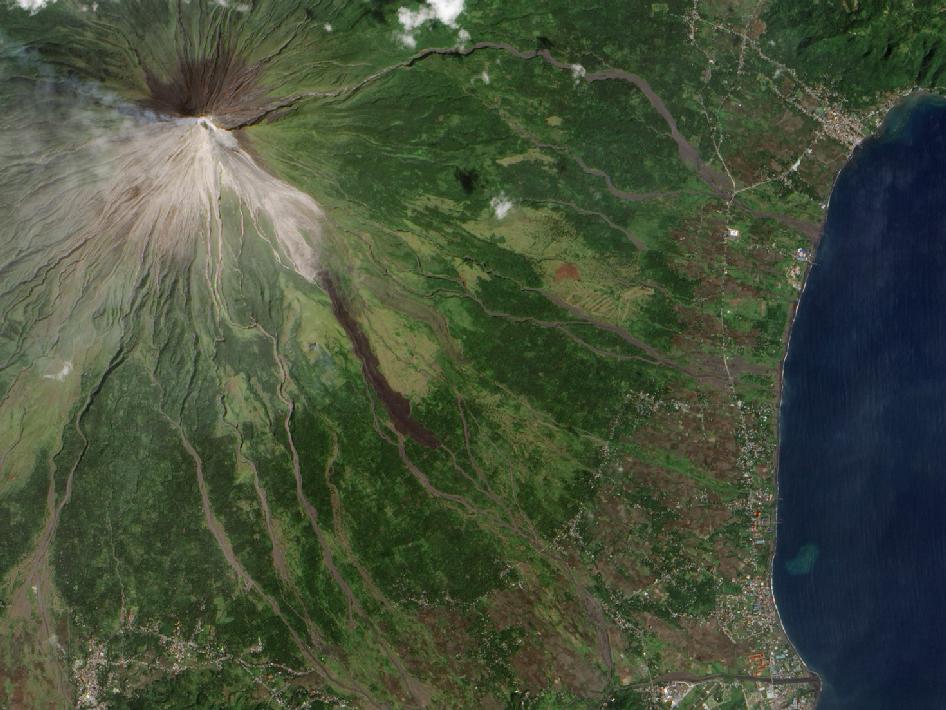 View larger | A NASA satellite captured this natural-color image of Mayon in December, 2009, another time of increased activity for this volcano. Read more about this image from NASA.

Mayon Volcano. The Mayon Volcano is a 2,642-meter (8,077 feet) high stratovolcano located in the Philippines. On the morning of May 7, 2013, a steam-driven explosion sent a plume of ash 500 meters (1,640 feet) into the air. Tragically, 21 climbers were on the volcano when it exploded, and 5 people were killed by the falling rocks. Nine others were injured and are in the process of being evacuated. The volcano was not under an alert when it exploded, and no magmatic eruptions are currently expected. However, the Philippine Institute of Volcanology and Seismology is requesting that the public avoid a 6-kilometer (3.7 mile) danger zone surrounding the summit due to the ongoing threat of stream-driven eruptions and rockfalls. 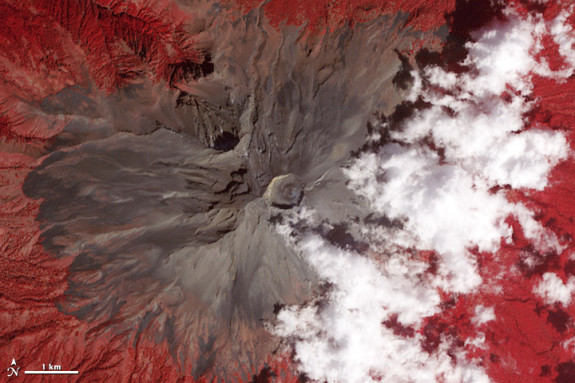 Popocatepetl, a volcano that looms on the Mexico City horizon, has been spitting small amounts of ash, steam, and volcanic gases for most of the 21st century. This satellite image shows the volcano’s summit in false-color (near-infrared, red, and green light). Bare rock is brown, vegetation is red, and clouds are white. A very faint volcanic plume is visible in the center of the summit crater. Image acquired February 5, 2013 via NASA’s Terra satellite. Caption also by NASA.

Popocatépetl. Popocatépetl is a towering 5,426-meter (17,802 feet) high stratovolcano located in Mexico. On May 7, 2013, the volcano erupted sending a plume of ash 3,200 meters (10,500 feet) into the air. The ash blanketed several nearby towns, and officials are requesting that the public avoid a 12-kilometer (7.5 miles) radius around the volcano. According to the Eruptions Science Blog, the volcano has produced a few intermittent steam and ash plumes over the past year. 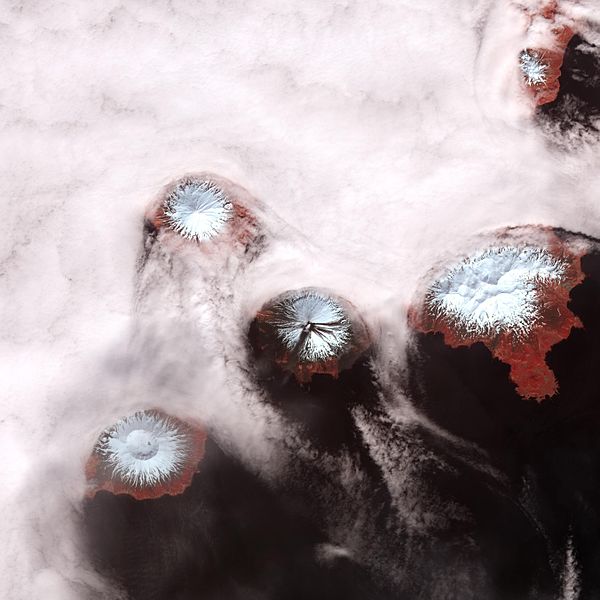 Picturesque, snow-capped volcanoes of the Islands of the Four Mountains in Alaska’s Aleutian Island chain. Mount Cleveland is near the image center. It shows red vegetation (false colour), a white snow-covered peak, a light plume of gas and ash, and dark lanes where ash and debris fell or flowed. Image via NASA’s Terra satellite.

Mount Cleveland. Mount Cleveland is a 1,730-meter (5,676 feet) high stratovolcano located in the Aleutian Islands of Alaska, USA. Stratovolcanoes are steep-sided volcanoes that are built of many alternating layers of hardened lava and ash. On May 4, 2013, the Alaska Volcano Observatory detected three short explosions at Mount Cleveland that were accompanied by a small cloud of ash that reached an altitude of approximately 4,600 meters (15,000 feet). The ash cloud was not high enough to pose a serious threat to aircraft, although some planes were diverted as a precaution according to a report from Reuters. Additional explosions at Mount Cleveland were detected on May 5 and 6. The volcano is currently under a watch alert level, which applies mainly to aircraft flying over this sparsely populated region. The Alaska Volcano Observatory issues watches when volcanoes exhibit heightened activity. Mount Cleveland has been under continued watch status for some time now due in part to four minor ash explosions during 2012.

Other volcanoes that have experience heightened activity in early May include Tungurahua in Ecuador, Papandayan in Indonesia and Heard Island in the southern Indian Ocean.

Bottom line: Several volcanoes have erupted during the first week of May, 2013. These volcanoes include Mount Cleveland in Alaska, the Mayon Volcano in the Philippines and Popocatépetl in Mexico.

Have Venus volcanoes been caught in the act?