Cool photo: Anatomy of a thunderstorm

Here’s a photo that really shows how a thunderstorm is constructed.

Here’s a photo that really shows how a thunderstorm is constructed.

It was taken by researchers on NASA’s DC-8, a flying laboratory that is studying thunderstorms, over central Oklahoma in May, 2012. 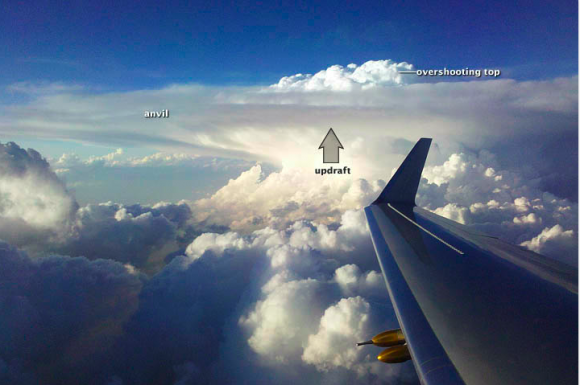 The image shows the structure of the storm cloud. Vigorous convection has created a strong updraft near the center of the storm where warm, moist air rises quickly upward, sometimes at speeds up to 160 kilometers per hour (100 miles per hour).

The flat bank of cirrus clouds spreading outward and forming the cloud’s anvil mark the edge of the tropopause. The tropopause is is the upper boundary of the troposphere, the lowest layer of Earth’s atmosphere, where all Earth’s weather occurs, and where air often flows vertically. In the higher layer of atmosphere – the stratosphere – air flow is mainly horizontal.

The tropopause behaves like a wall, deflecting the updraft’s rising air and causing it to spread outward in a way that molds the upper part of clouds into the distinctive anvil shape. However, convection sometimes pushes moisture past the top of the cloud and into the tropopause, creating bubbling protrusions called overshooting tops. These protrusions are usually short lived and wispy, but they tend to persist longer above severe storms like this one.

This photo was taken as part of a field campaign called Deep Convective Clouds and Chemistry (DC3), made up of a team of 100 researchers from 29 organizations. The team, based in Kansas, is sending aircraft to Alabama, Colorado, and Oklahoma to sample how storms affect the chemistry of the upper troposphere.

The researchers are looking at large multicell and supercell storms with powerful updrafts capable of lofting volatile pollutants and moisture-rich air nearly 12,000 meters (40,000 feet) up in the atmosphere, a height that pollutants wouldn’t reach without a boost from a storm. They are particularly interested in understanding how certain pollutants react with nitrogen oxides produced by lightning to generate ozone, a greenhouse gas that has a strong impact on the climate at this altitude.

Bottom line: A photo that clearly illustrates how a thunderstorm is constructed was taken by researchers on NASA’s DC-8, a flying laboratory that is studying thunderstorms, over central Oklahoma in May, 2012.