Atlantic hurricane season begins June 1 and ends November 30. Here’s how forecasters make predictions, whether to stay or evacuate, what kinds of risks extend inland, and how your social networks can help or hurt you. 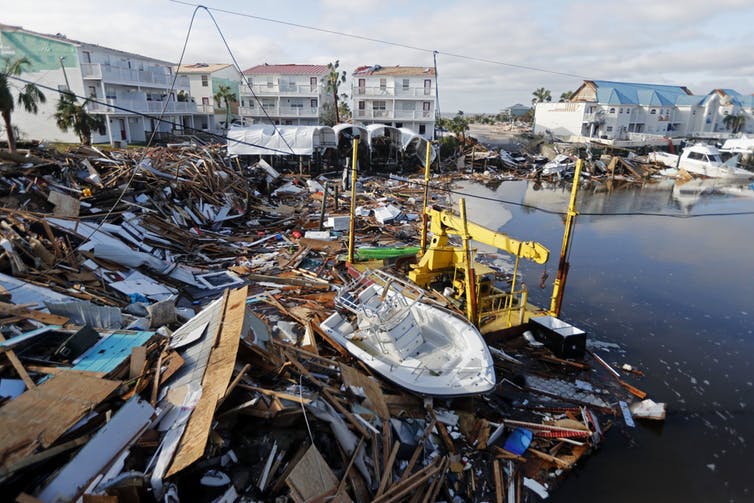 Debris in a boatyard in Mexico Beach, Florida, on October 11, 2018, after Hurricane Michael heavily damaged the town. Image via AP Photo/Gerald Herbert, File.

By Jennifer Weeks, The Conversation

The official Atlantic hurricane season begins on June 1, even as many communities are still recovering from a destructive year in 2018. Hurricane Florence swamped much of the Carolinas in September, followed by Hurricane Michael, which battered the Florida Panhandle less than a month later. Together, these two storms killed at least 113 people and caused billions of dollars in damages.

For 2019, federal forecasters are predicting a “near-normal” hurricane season, with nine to 15 named storms expected to form and two to four of them developing into major hurricanes. But as weather experts warn, it only takes one storm making landfall to make it an active season for people in harm’s way. Here are five expert takes on preparing for whatever the 2019 hurricane season brings.

We rely on expert forecasters to tell us how strong hurricanes will be, the odds that they will make landfall and where they’re most likely to come ashore. But how do stormcasters develop judgments from enormous quantities of data?

As Florida State University meteorologists Mark Bourassa and Vasu Misra explain, models – complex software packages that run on large computers – are essential. But models’ results don’t always agree with each other. That’s why forecasters use collections of storm models instead of just one. And they may tweak certain assumptions built into the models to account for uncertainty about conditions in a particular storm.

Storm track forecasts have become much more accurate in recent decades, but predictions of storm intensity have changed little. That’s because it’s hard to capture all the variables that determine storm intensity. “Models are inexact in their descriptions of the entire state of the atmosphere and ocean at the start time of the model,” Bourassa and Misra acknowledge – a point worth remembering if a storm heads in your direction.

If a hurricane is approaching, should you leave? It’s a complicated question, especially when evacuations are recommended but not mandatory. Residents have to weigh the economic and emotional costs of relocating against damage forecasts that may be changing hourly.

Government officials feel the pressure when they have to decide whether to order people out of town. University of South Carolina geographer Susan Cutter calls these decisions

… part science, part skill based on experience, and part luck.

Constituents may be angry if they evacuate and the storm misses their area – but leaving people in harm’s way is clearly a worse prospect.

Planners base evacuation decisions on many factors beyond storm forecasts, Cutter writes. They also consider road networks, demographics, and whether and how quickly residents are likely to follow orders. Cutter notes:

It is hard to predict the path of hurricanes, and even more so the behavior of people in response to them.

A hurricane is bearing down on the Atlantic or Gulf coast, but you’re on vacation in the mountains. Should you track the forecasts?

Louisiana State University geographer Craig Colten’s response is an emphatic yes. As Colten has found in his research on water in the U.S. South, the risk of catastrophic flooding during and after hurricanes extends many miles inland. However, communities away from the shore often are not as well prepared for these emergencies.

From New England to Georgia, a dense network of rivers flows down from the eastern Appalachians across the Piedmont – a broad, rolling plateau extending from the mountains to the coastal plain – and drains into the Atlantic Ocean. Steep gradients move water quickly down the mountain slopes.

When hurricanes and tropical storms move inland, they meet the steep face of the Blue Ridge Mountains and rise, cooling and releasing huge quantities of rain. These deluges, he said

… funnel into river networks and rush toward the sea, often spilling over the banks of overwhelmed channels.

This pattern was readily apparent in September 2018 when Hurricane Florence dumped 20 to 30 inches of rain on many parts of North Carolina, setting flood records at 28 different locations. 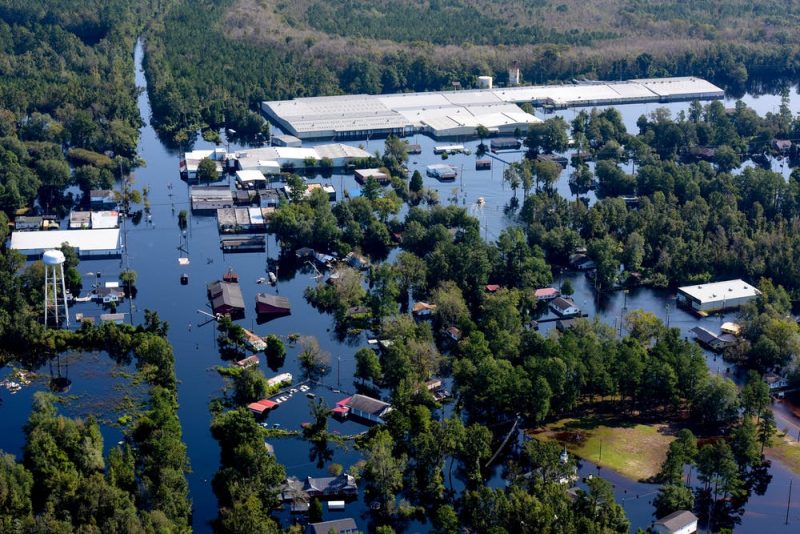 4. Your social networks can help or hurt you

Social media can be extremely helpful during a disaster. Apps deliver weather updates, public service announcements and directions to the nearest gas station that still has fuel. People can use Facebook or Twitter to call for help when they’re cut off from roads or lose power, and emergency managers use them to organize and deliver food and medical supplies.

In contrast, we found that having stronger bonding ties – that is, family and friends – made people less likely to evacuate leading up to a hurricane. In our view, this is a critical insight. People whose immediate, close networks are strong may feel supported and better-prepared to weather the storm.

Strong networks are invaluable for anyone weathering the stress of a major disaster. However, Aldrich’s research suggests that a person who sees others in her immediate, close network staying in place may opt not to evacuate, when heeding warnings from public officials would be a better, albeit less natural, choice.

This article is a round-up of stories from The Conversation’s archive.

Bottom line: For hurricane season 2019: How forecasters make predictions, whether to stay or evacuate, what kinds of risks extend inland, and how your social networks can help or hurt you.