Floods and landslides remain a risk from Patricia – strongest storm yet recorded in the Western Hemisphere. The storm caused less damage than expected. It went from a tropical storm to a Category 5 hurricane in just 24 hours. 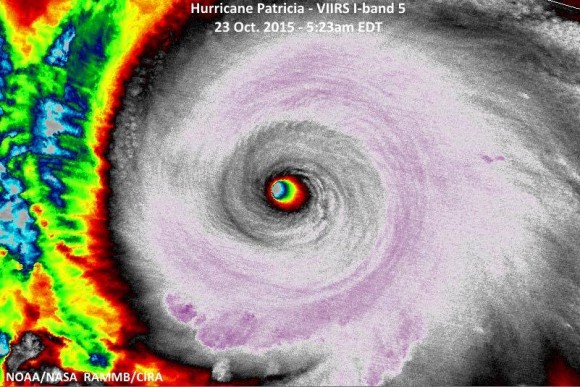 In just 24 hours, Patricia went from a tropical storm to a Category 5 hurricane and the strongest storm ever recorded in the Western Hemisphere. It has now been downgraded from a Category 5 to a Category 2 storm, after making landfall Friday (October 23, 2015) at approximately 6:15 p.m. CDT (2315 UTC) along the coast of southwestern Mexico, in the Cuixmala area of the state of Jalisco. Landfall was 55 miles (85 km) west-northwest of the city of Manzanillo, Mexico’s busiest port. Patricia hit the coast with winds of 165 mph (265 kph).

Mexico’s president President Enrique Pena Nieto said Patricia had so far caused less damage than feared, but warned that it still poses a threat of floods and landslides as it brings heavy rain to parts of the country. He said:

The first reports confirm that the damages have been minor to those corresponding to a hurricane of this magnitude. Nonetheless, it is very important that the population stays in the shelters, the security forces will be patrolling to protect their homes. I repeat, we still can’t let our guard down.

It will likely take several days to find out exactly what kind of damage occurred along the Mexico coast as one of the most powerful hurricanes in our lifetimes made landfall. People will likely need food, water, shelter, and medical assistance. A hurricane’s powerful winds are only one of its dangerous aspects. Storm surge and flooding are other factors. The National Weather Service (NWS) said of Patricia:

Residents in low-lying areas near the coast in the hurricane warning area should evacuate immediately, since the storm surge could be catastrophic.

Click here to learn why Patricia intensified so rapidly and become one of the strongest tropical cyclones ever seen.

Patricia’s barometric pressure of 879 millibars (mb) is what makes it the strongest storm to form in the Eastern Pacific and Atlantic basins combined, since record-keeping began.

At the 10 p.m. CDT advisory Wednesday evening, Patricia was a tropical storm with winds of 60 mph (100 kph). Twenty four hours later, at 10 p.m. CDT Thursday night, the tropical cyclone rapidly intensified into a Category 5 hurricane with sustained winds of 160 mph.

By 4 a.m. CDT Friday morning, Patricia had intensified to sustain winds of 200 mph, which is an incredible 135 mph increase in 30 hours.

The good news with Hurricane Patricia is that the storm underwent an eyewall replacement cycle (ERC) as it was pushing ashore. When ERC’s take place, the storm typically weakens. The winds diminished from 190 mph to 165 mph, but still remained as a Category 5 hurricane as it made landfall. The storm was fairly small and compact meaning the strongest winds were very close to the center of the storm. Hurricane force winds extended only 35 miles (55 km) outwards from the center.

Meanwhile, tropical storm force winds (39-73 mph) extended 175 miles (280 km). If the storm was the size of Katrina or Haiyan, winds and storm surge would have impacted a much larger area.

The eye of #Patricia continues to shrink as it approaches landfall this evening. pic.twitter.com/vKVoOpCuVw

For perspective, several of the most devastating hurricanes ever to affect the United States were never even close to the intensity of Patricia. Hurricane Katrina had a pressure of 902 mb at peak intensity. Hurricane Andrew was at 922 mb. Hurricane Wilma (2005) holds the record for the strongest hurricane in the Atlantic basin at 882 mb. Remember, the lower the pressure, the stronger the storm.

Mesowest observations out of Cuixmala – showing wind speeds in that area – are horrifying to look at. The mesonet station CCXJ1 recorded sustained winds around 160-180 mph. At one point, it measured a wind gust of 210 mph. There are questions on whether or not the information is valid, but it definitely looks possible. Incredibly scary stuff!

Patricia will continue to weaken throughout Saturday as it pushes over land and encounters mountainous terrain. Landslides and flash flooding will be a major concern across Mexico as the storm pushes off to the northeast. Some areas could easily see 6-12 inches (15-30 cm) of rain. The remnants of Patricia will likely combine with a trough across the central United States. It will enhance the moisture across Texas and Louisiana as we head into Monday-Wednesday. Major flooding is possible across Southeast Texas and into Louisiana and Arkansas.

The Weather Prediction Center is forecasting an additional 6-12 inches (15-30 cm) of rain with some spots possibly receiving more than that around the Houston, Texas area.

Why did Patricia intensify so rapidly and become one of the strongest tropical cyclones ever seen? The extremely warm ocean waters in the Eastern Pacific were a major contributor. This is an El Niño year, and such years typically produce unusually warm sea surface temperatures and a favorable atmospheric environment conducive for tropical cyclone development in the Eastern Pacific.

What is more, 2015 is likely to become the warmest year ever recorded globally. The majority of the heat is stored in ocean waters. So the warmer air temperatures for the globe as a whole, too, likely had some influence on the powerful intensification of this storm.

Here is an amazing statistic: in 2015 so far, we have seen 22 storms in the Northern Hemisphere become Category 4 or 5 hurricanes. That’s a new record, surpassing the old record of 18 Category 4 or 5 storms set back in 2004.

Finally, meteorologist Patrick Marsh posted a graphic showing all the pressure-wind relationship for Eastern Pacific Hurricane Patricia in the context of historical Eastern Pacific tropical cyclones. As you can see in that graphic, below, Patricia (indicated as the star), is nothing like the storms that have formed in that basin since record keeping began.

None of the earlier storms, recorded since 1954, matched the intensity of Patricia. 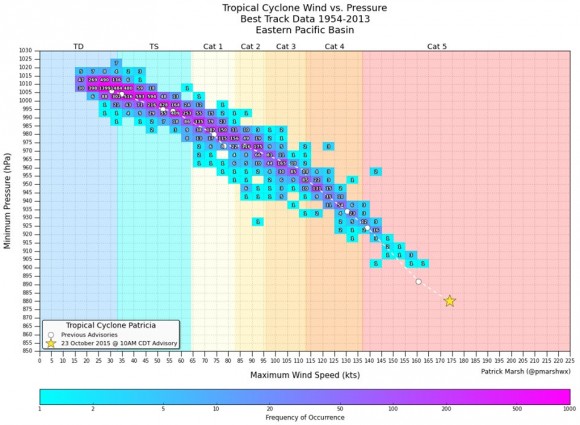 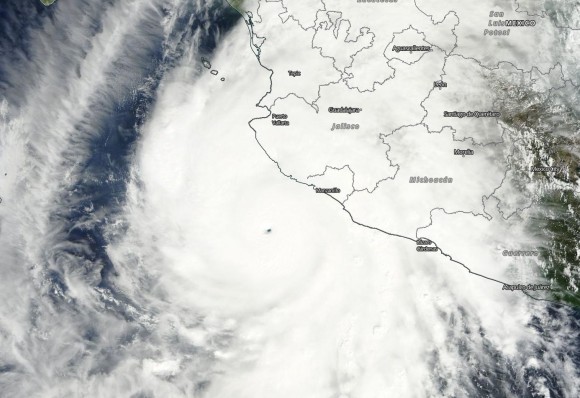 Bottom line: Hurricane Patricia – strongest hurricane so far recorded in the Western Hemisphere – had sustained winds of 200 mph and a pressure of 879 mb. Patricia made landfall Friday evening (October 23, 2015) near Cuixmala, Mexico with sustained winds around 165 mph. Although the storm will degenerate as a remnant low, it will produce widespread rain and flooding across Mexico and eventually into Texas and Louisiana. The footage below is from the Hurricane Hunters as they were flying in the eye of Patricia Friday morning and was pushing into the eyewall.

This video was taken during our 2nd center fix today. I started the video while we were in the eye and then flew into the eye wall.