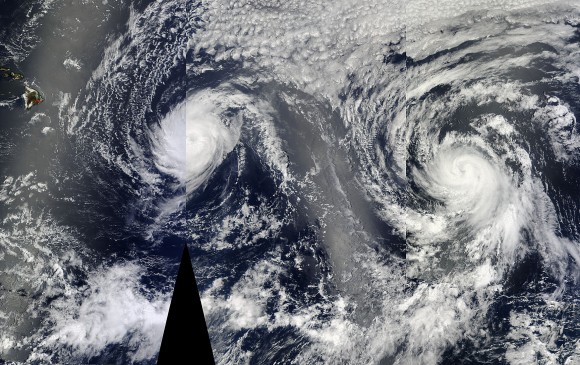 Iselle and Julio bear down on Hawaii. NASA image.

Hawaii has seen tropical cyclones passing near, impacting its region of the Pacific, in recent decades. However, only two times since 1950 has the state of Hawaii been directly affected by a hurricane. The last storm to hit Hawaii directly was 22 years ago. Now two storms are laying siege to Hawaii: Iselle and Julio. Iselle was downgraded to a tropical storm as its winds battered Hawaii’s Big Island on Thursday night. The center of the storm had been expected to make landfall Thursday, but remained offshore hours after it had been expected to strike. On its current path, Iselle will deliver a direct hit to Big Island of Hawaii and pass just south of the other islands.

Hurricane Julio, with winds of over 100 miles per hour, is close behind. It is expected to reach the Hawaiian Islands over the weekend, but is not expected to impact them directly. Instead, Julio will likely pass north of the islands.

According to media reports, more than 800 people on the Big Island went into evacuation shelters on Thursday, as storm surges and high winds from Iselle struck. There are reports of downed trees and power lines, loss of electricity in some places and blocked highways.

By the way, while gearing up for Hurricane Iselle on Thursday, the Big Island also got a moderately strong (4.3-magnitude) earthquake. August 7 earthquake details from USGS here. 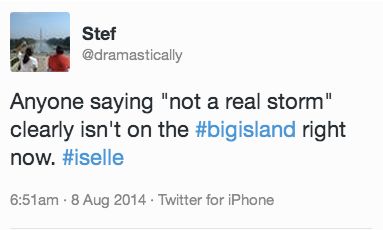 Dramatic image of Hurricane Iselle bearing down on the Hawaiian Islands on August 6, 2014. Image via NASA

Only two hurricanes have hit the state of Hawaii directly in the past 65 years. The storms that directly impacted Hawaii was Dot in 1959, which hit the island of Kauai as a Category 1 storm, and Iniki of 1992, which also hit Kauai but as a Category 4 storm. Iniki, which killed six people, is still the strongest storm known to have hit Hawaii. Iniki struck from the south and pushed northward into the island of Kauai.

Meanwhile, Iselle had been pushing toward the east and was expected to hit the Big Island of Hawaii yesterday. If it makes landfall there, as expected, it will be the first time a hurricane has made a direct hit on the Big Island in known history.

While it was traversing the open waters of the Pacific last weekend, Hurricane Iselle was a powerful hurricane. It was a Category 4 hurricane with winds near 140 mph. The storm looked like a donut, with a very large eye in the center. When Iselle was a powerful major hurricane, it was considered to be annular, meaning it had a large, symmetrical/round eyewall with very little appearance of spiral bands along the storm. Annular storms are a rare breed, and are capable to maintaining their intensity longer and are able to avoid eyewall replacement cycles which can briefly lead to slight weakening of a hurricane. Despite the dry air and cooler sea surface temperatures, Iselle was able to maintain its form and was actually strengthening a bit as it pushed to the west. Iselle has been able to fight out the dry air across the Central Pacific and moisten the atmosphere ahead of it.

To make matters worse, after Iselle pushes through the Hawaiian islands, we will also have to watch Hurricane Julio, which is east of Iselle. Julio is a Category 2 hurricane with sustained winds of 105 mph. Fortunately, Julio is expected to weaken into a tropical storm and push north of Hawaii, so direct impact is not expected. Of course, a few changes in the atmosphere could drift the storm further south, so it is still worth monitoring. Regardless, Julio could provide additional rain to areas that might have already seen up to a foot of rain from Iselle.

Bottom line: Iselle’s high winds battered the Big Island of Hawaii on Thursday, August 7, 2014. Julio is expected to impact Hawaii over the weekend. I strongly urge everyone to follow Honolulu National Weather Service on Twitter for the latest weather updates.