Hurricane Bud was expected to make a quick landfall in western Mexico this weekend, but now it is dissipating.

UPDATE MAY 26, 2012. The U.S. National Hurricane Center in Miami said early Saturday that Hurricane Bud was seen to weaken early Saturday before making landfall in Mexico. It has become increasingly disorganized in the Pacific, although it may still drop another inch or two of rain along Mexico’s southwest coast. Bud is expected to dissipate within the next day or so.

Bud has now degenerated to a remnant low, according to the National Hurricane Center. Maximum sustained winds were near 30 mph (48 kph) as the storm hovered about 15 miles (24 kilometers) off the coast of Cabo Corrientes, Mexico.

EarthSky weather blogger Matt Daniel said that, in weakening suddenly and unexpectedly in this way, Hurricane Bud reminded him of 2011’s Tropical Storm Don. Don tracked across the Gulf of Mexico and reached a peak intensity of 50 mph (85 km/h) before moving ashore in Texas on July 30, 2011 as a tropical depression. Initially, Don was hoped to be a possible catalyst for relief to drought-stricken Texas. But the system dissipated rapidly after making landfall, providing very little in the way of help to the state, which went on to suffer several more months of extreme drought and is still in drought conditions today.

Meanwhile, the U.S. Southeast coast is being threatened with rain from Subtropical Storm Beryl. In a way also reminiscent of Don in 2011, that part of the U.S. is hoping for much-needed rain.

MAY 25, 2012. Hurricane Bud is expected to make a quick landfall in western Mexico this weekend before turning back to sea. Heavy rainfall from hurricane Bud’s slow movement may result in severe flooding and dangerous landslides as it moves over Mexico’s rugged coastal terrain. Bud’s outer bands were already affecting coastal Mexico yesterday (May 24).

NASA’s TRMM and Aqua satellites have been flying over Bud as it nears the Mexican coast and are providing rainfall, temperature, pressure, visible and infrared data to forecasters. 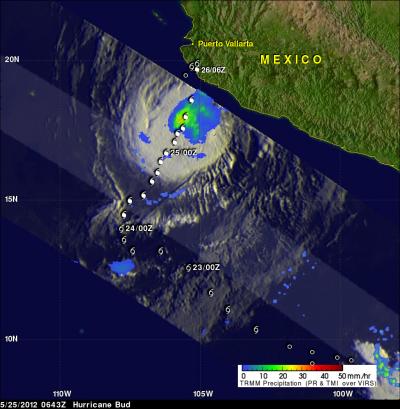 NASA’s TRMM satellite passed above Hurricane Bud on May 25 at 12:49 a.m. EDT/U.S. and it saw a large area of moderate to heavy rainfall with rates of over 30mm/hr (~1.2 inches). Bud’s past and predicted locations are shown overlaid in white. Heavy rainfall is indicated in red, falling at 2 inches/50 mm/hr. Image credit: NASA/TRMM, Hal Pierce

Bud is expected to bring a lot of rainfall as it continues to head for a landfall. The National Hurricane Center expects total rain accumulations of 6 to 10 inches (152 to 254 mm) along the southwestern coast of Mexico with isolated maximum amounts of 15 inches (381 mm). As always with heavy rainfall in this region, life-threatening flash floods and mudslides will be possible.

Along the coast a dangerous storm surge is expected to produce significant coastal flooding near and to the east of where the center of bud makes landfall. In addition, the southern and southwestern coasts of Mexico are expected to experience dangerous swells, surf and rip currents.

The National Hurricane Center (NHC) forecasters expect Bud to make landfall and then turnaround and head back out into the Eastern Pacific Ocean. Once Bud begins interacting with the coast, the Rapid decay is expected as western Mexico’s high terrain separates the circulation of the storm. Bud is forecast to become a remnant low in 72 hours and dissipate in 96 hours.

Bottom line: Hurricane Bud was expected to make a quick landfall in western Mexico this weekend, but now it is dissipating.