Hundreds of millions of South Asians at risk from glacier melt

Hundreds of millions of people in countries like India, Pakistan, Nepal and Bangladesh depend on the Hindu Kush Himalayan glaciers for food, energy and water.

This article is republished with permission from GlacierHub. This post was written by Tsechu Dolma .

A roadside market along the way from Kabul to Mazer-i-Sharif, Afghanistan. Hundreds of millions of people in countries near the Hindu Kush mountain range are at risk from glacial melt. Photo credit: Susan Novak/Flickr

Few regions on Earth depend as heavily on glaciers for food, energy and water as South Asia’s Hindu Kush Himalayan ecosystem. But now hundreds of millions in South Asia are at risk from glacier melt. A new research paper in the journal Environmental Science and Policy highlights some of the challenges downstream communities face when glacier water from upstream communities becomes scarce.

The greater South Asian region accounts for two-thirds of the world’s population and consumes roughly 60 percent of the planet’s water. Hundreds of millions of people in South Asian countries like India, Pakistan, Nepal and Bangladesh depend on the Hindu Kush Himalayan ecosystem for direct and indirect sustenance.

Golam Rasul is the lead researcher in the May 2014 paper. He said: 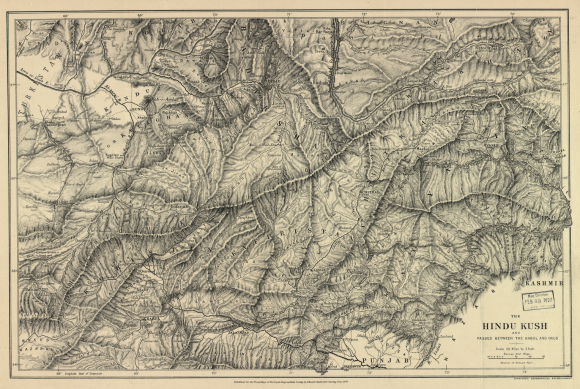 The Hindu Kush range extends some 800 kilometers in a northeast-to-southwest direction from the Pamir Mountains near the Pakistan-China border, through Pakistan, and into western Afghanistan. This 1879 map shows the passes between Kabul and Oxus. Image credit: Royal Geographical Society/Wikimedia Commons

Rasul, the head of the International Centre for Integrated Mountain Development’s Economic Analysis division, said the best approach to the situation is a nexus approach. In other words, equal attention must be paid to watersheds, catchments, river system headwaters and hydropower.

The mountainous area is home to tens of thousands of glaciers whose water reserves are equivalent to around three times the annual precipitation over the entire regions. These glaciers – a study from International Centre for Integrated Mountain Development put the number at 54,000 – are a crucial component of the region’s ecosystem, and in many ways central to providing energy, food and water to the glacier communities and those downstream.

The glaciers of the Hindu Kush mountain range are heavily relied on for water, food, energy, and more. A new study says hundreds of millions of people are at risk from the glaciers melting. Photo credit: Meandering Mammal/Flickr

Rasul notes that reversing this trend is inherently difficult, given that mountain communities bear the cost of conservation, but receive only a few of the benefits due to “a lack of institutional mechanisms and policy arrangements for sharing the benefits and costs of conservation.”

In order to maximize benefits to upstream and downstream communities, the authors say a nexus approach that looks to understand the interdependencies of food, water, and energy, can maximize synergies and manage trade-offs. As the water intensity of food and energy production increases, the recognition of the role of glaciers and other hydrological resources in the Hindu Kush Himalayan ecosystem will be vital in promoting its sustainable use.

Bottom line: Hundreds of millions of people in South Asian countries like India, Pakistan, Nepal and Bangladesh depend on the Hindu Kush Himalayan ecosystem for direct and indirect sustenance. A paper in Environmental Science and Policy highlights some of the challenges downstream communities face when glacier water from upstream communities becomes scarce.