With fat deposits that almost double their weight, the tiny ruby-throated hummingbird can fly non-stop for more than 1,200 miles (2,000 km) during migration. 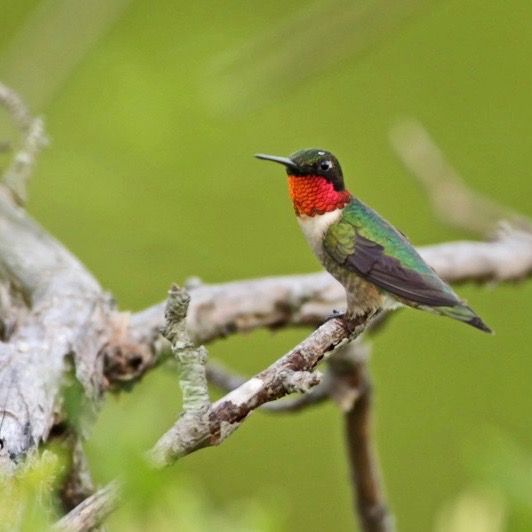 How far can a ruby-throated hummingbird fly without taking a break? Some 1,243 miles (2,000 km), according to scientists at the University of Southern Mississippi. This finding was among several from a scientific study examining the fall migration of ruby-throated hummingbirds, published in the April, 2016 issue of The The Auk: Ornithological Advances. The paper authors, Theodore Zenzal, Jr. and Frank Moore, led a four-year study of these diminutive energetic bird at Alabama’s Bon Secour National Wildlife Refuge, along the Gulf coast, where the birds stopped to feed during their journey to wintering grounds in Central America.

Ruby-throated hummingbirds are tiny. They measure up to 3.5 inches (9 cm) in length, with a wingspan only up to 4.3 inches (11 cm) and bill length of about 0.8 inches (2 cm). They’re the only hummingbird species to breed in eastern North America, in a large range spanning east of the Rocky mountains to the Atlantic coast.

Breeding range of the ruby-throated hummingbird is shown in green. Blue shows their wintering range. They’re only found during migration at locations in yellow. Image via Ken Thomas.

Named for the red iridescent patch of feathers on the throat of adult male birds, ruby-throated hummingbirds are fairly common in woodlands and gardens, sipping nectar from flowers, being especially partial to red, orange and pink flowers. Small insects and spiders are an important source of protein, particularly for their growing chicks.

While the breeding and wintering ranges of ruby-throated hummingbirds are well documented, little is known about the remarkable migratory journey of these tiny birds. As they move southward over land in autumn, the birds stop to feed along the way to refuel for the next leg of the journey.

But at coastal locations such as the study site at the Bon Secour National Wildlife Refuge, they encounter a vast stretch of water, the Gulf of Mexico. Some birds may follow the coastline south towards Central America, perhaps making partial water crossings along the route.

It’s also been thought that some hummingbirds migrate, on a non-stop flight, across the Gulf of Mexico. There’s not enough definitive proof that they take this daunting path, but Zenzal and Moore show that with a flight range of over 1,200 miles (2,000 km), it’s possible under favorable weather conditions.

Hummingbirds traveled through the study area on the Alabama coast between late August and late October, peaking in September. The research team collected data about the birds by trapping them in mist nets. The sex of the bird, body measurements and weight were recorded, as well as whether the birds were adults or juveniles born that same year. In all, these scientists collected data from 2,729 ruby-throated hummingbirds. Before releasing the birds, they fitted tiny metal bands with a unique ID around a leg on each bird so that if they were later recaptured, more information could be obtained about its condition. 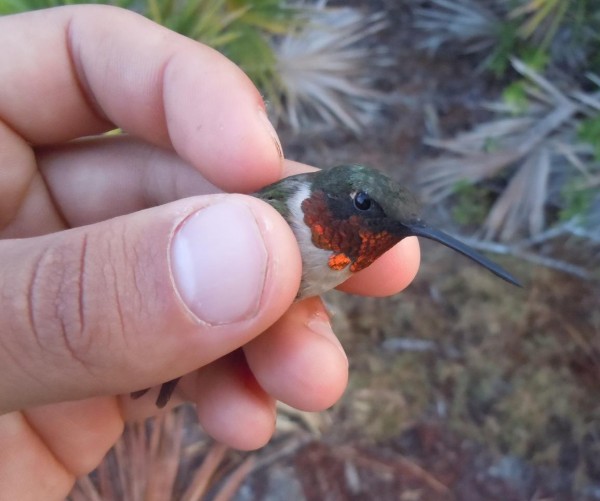 A male ruby-throated hummingbird in the hand of a researcher, just before it’s released. Image credit: B. Dossman.

The scientists calculated the ruby-throated hummingbirds’ average non-stop flight distance based on measurements of the birds’ weight and wingspan.

Analysis of the data also predicted that older male birds were able to travel farther distances at a time compared to adult females and juveniles.

During the migration season, the bird feed voraciously on nectar to accumulate fat reserves that fuel their long distance flights.

Zenzal, the paper’s first author, said in a statement:

The most interesting thing, in my opinion, is how some of these birds effectively double their body mass during migration and are still able to perform migratory flights, especially given some of the heftier birds seem to barely make it to a nearby branch after being released.

The team also found that older birds, particularly males, migrated earlier and were in better physical condition for long-distance travel compared to juveniles. Older birds also had more fat deposits and stayed for shorter durations at the research site, compared to the leaner juveniles that lingered around for a longer time.

The researchers think that it’s probably due to lack of experience, after all, the juveniles were embarking on their first migratory journey. These young birds probably had to compete for food resources with socially-dominant adults during the early part of their journey, plus they spent more time feeding at stopovers and flew shorter distances at a time. 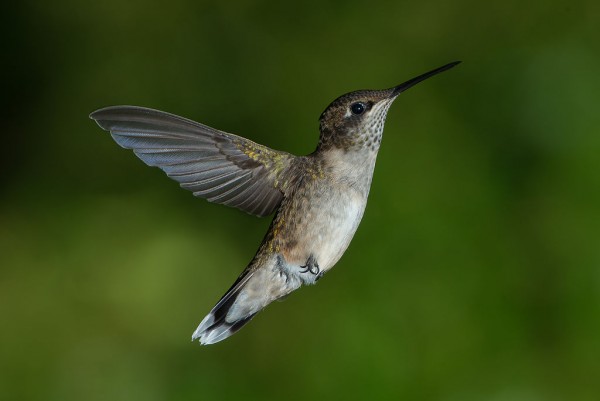 Chris Clark, at the University of California Riverside, an expert on hummingbird behavior, who was not part of the research team, commented on the significance of the findings:

Patterns we previously had hints of from small, anecdotal observations are documented here with a very large sample size. It’s interesting that the young of the year migrate after adults and are quite different in their stopover phenology.

This suggests there are substantial differences between flying south for the first time, as opposed to flying somewhere again as an adult.

I think that further research on how young hummingbirds migrate, and the decisions they make, would be really interesting. 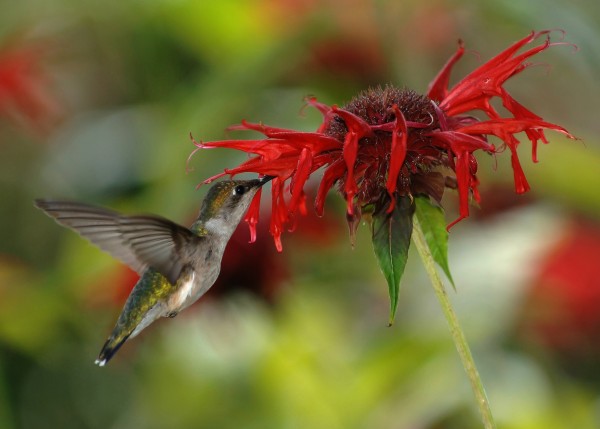 Bottom line: A recent study shows that ruby-throated hummingbirds are capable of flying, non-stop, over 1,200 miles (2,000 km) during migration. The study also found that adult birds, particularly males, migrate earlier during the fall than females and juveniles. Adult male birds were also in better physical condition to undertake the arduous journey. Juveniles, migrating for the first time in their lives, tended to leave later and take longer, probably due to inexperience.