Humberto is first hurricane of 2013 season in Atlantic

Humberto was just a few hours shy of tying the record for “latest first hurricane to form” during an Atlantic hurricane season.

The 2013 Atlantic hurricane season has started off very slowly, with the first hurricane now having formed in the Atlantic at what’s usually the season’s peak. Hurricane Humberto formed in the Eastern Atlantic Ocean off the coast of Africa. The National Hurricane Center said earlier today (September 11, 2013) that it had developed winds of at least 74 miles per hour, the minimum wind speed required for a storm to be defined as a hurricane. The good news is that this storm is not expected to impact North America as it traverses the open Atlantic waters. The latest the first hurricane has ever formed in the satellite era was on September 11, 2002 at 8 a.m., when Hurricane Gustav formed. Humberto was just a few hours shy of tying that record. 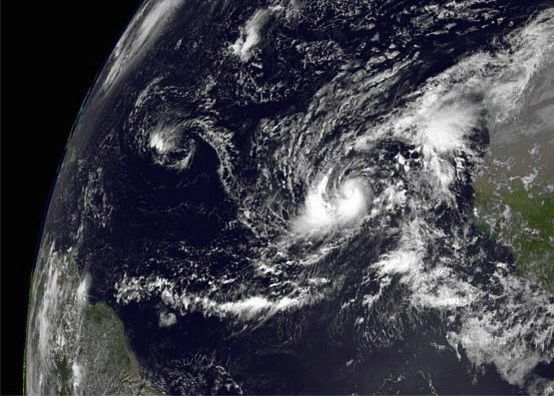 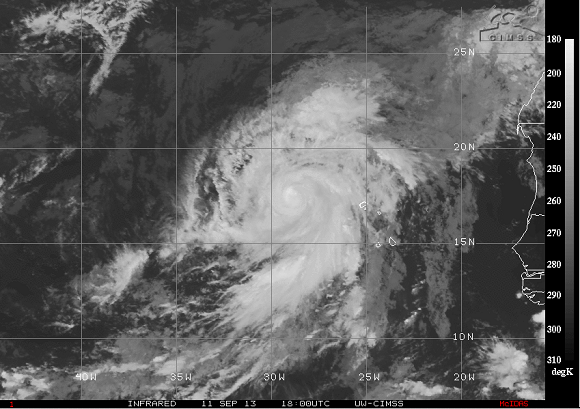 Infrared image of Hurricane Humberto as it spins in the eastern Atlantic Ocean on September 11, 2013. Image via CIMSS

Hurricane Humberto originally formed from a very impressive African wave pushing off the coast of Africa. Most of our weather models depicted development from this wave, and all projected favorable conditions to strengthen into a hurricane.

Today, Humberto is west of the Cape Verde Islands and is pushing off to the north, moving at 9 mph. The storm will likely maintain hurricane intensity through Friday morning (September 13), but will likely weaken afterwards as it encounters unfavorable conditions such as cooler sea surface temperatures and wind shear. However, an area of high pressure will likely steer it more to the west through time.

This storm has a high chance of not affecting any land areas for the next several days. However, for now, if you live in Bermuda, you should monitor this system as it spins over open waters.

Forecast track of Hurricane Humberto over the next five days. Image via National Hurricane Center

Bottom line: The first hurricane of the 2013 Atlantic season formed on September 11, 2013 at 5 a.m. AST. Humberto is the first hurricane of the 2013 season, and the second-latest hurricane to form in the Atlantic, right behind Hurricane Gustav on September 11, 2002. Humberto is not expected to impact any land areas, but people living in Bermuda should keep an eye on this storm as it pushes to the north and eventually to the northwest.