It’s vast, said the scientists who measured it, but hidden by the sea. 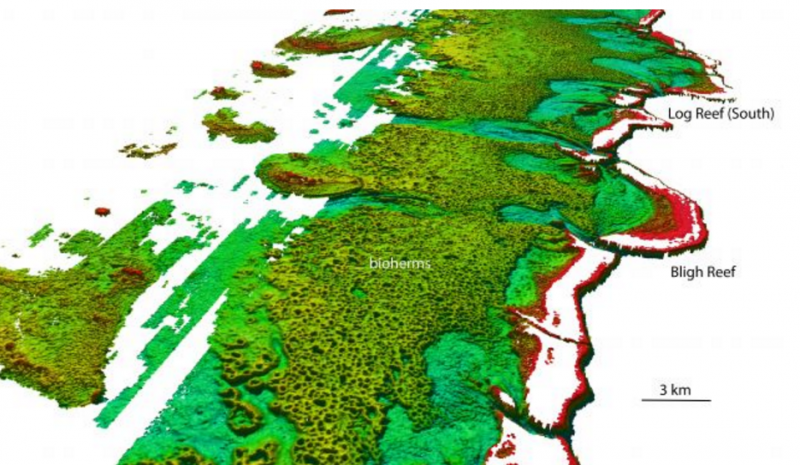 Northwesterly view of hidden reef off Cape York, Australia. Depths are colored red (shallow) to blue (deep), over a depth range of about 164 feet (50 meters). Image via James Cook University.

A team of researchers working with laser data from the Royal Australian Navy have now revealed the extent of a vast reef system behind Australia’s familiar Great Barrier Reef. The researchers said the high-resolution seafloor data show great fields of unusual donut-shaped circular mounds, called bioherms, each 656-984 feet (200-300 meters) across and up to 33 feet (10 meters) deep at the center. This new information was published in the journal Coral Reefs on August 26, 2016.

Scientists have known about these geological structures in the northern Great Barrier Reef since the 1970s and ’80s. But Robin Beaman of James Cook University in Queensland, Australia (a study coauthor) commented in a statement:

… never before has the true nature of their shape, size and vast scale been revealed.

The deeper seafloor behind the familiar coral reefs amazed us.

The bioherms are reef-like structures formed by the growth of a common green algae – called Halimeda. The algae are composed of living calcified segments. When they die, the algae form small limestone flakes that look like white cornflakes. Over time these flakes build up into large reef-like mounds. These are the bioherms.

In their statement, the researchers expressed a concern about the bioherm field’s vulnerability to climate change. As a calcifying organism, the Halimeda might be susceptible to ocean acidification and warming, they said.