How to ask a horse what it wants

Do you want a blanket? Norwegian researchers recently described how they trained horses to use symbols to answer that question. 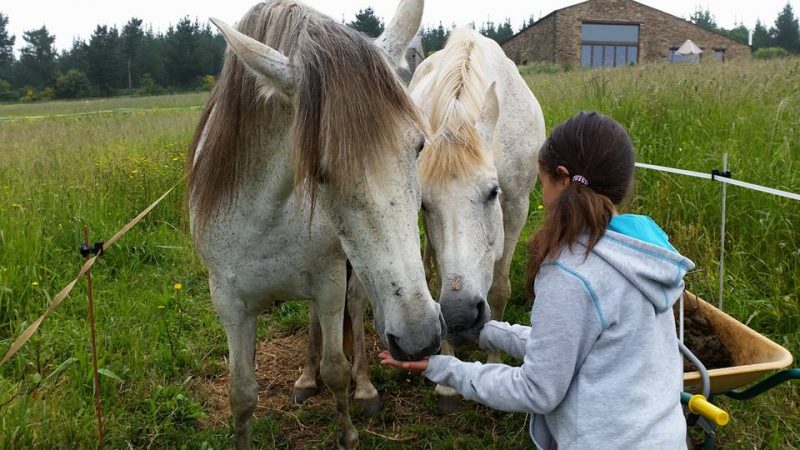 Canela (l), an 11-year-old Andalusian, and Blanquita (r), a Lusitano crossbreed between 15 to 20 years of age, are both rescued horses now living the good life in northern Spain. Image via Dominique Brand.

Communication with horses tends to go in one direction. A handler gives a voice, visual or physical command, and the horse performs what it was trained to do. But what if you could have a conversation with a horse? Not wise-cracking Mr. Ed and Wilbur exchanges, but simple answers to simple questions. A new study shows that our equine friends can, with the right training and carefully-crafted questions, freely express what they want.

The study, published in Applied Animal Behaviour Science by a team led by Cecilie M. Mejdell of the Norwegian Veterinary Institute, describes how horses were trained to respond to a question using symbols on boards.

In the study, horses were presented with symbols on a white wooden board. The horizontal bar on the left means “put blanket on,” the blank board in the middle means “no change,” and the vertical bar on the right means “take blanket off.” Image via Cecilie M. Mejdell.

The researchers wanted to figure out a way to get information, literally straight from the horse’s mouth. One way to do it was to pose a simple question, and provide a choice of answers for the horse to select from, along with a way for the horse to indicate its choice to its handler. Writing in their paper, the authors said:

Our aim was thus to develop a tool to “ask” horses whether or not they prefer to wear a blanket under different weather conditions.

In Nordic and some other countries with cold winters, the use of blankets on horses has generated controversy. People opposed to blanketing horses in winter claim that given suitable living conditions, horses adapted to cold climates can tolerate wintry conditions. They say making a horse wear a blanket disrupts the horse’s natural thermoregulation.

But what would the horses themselves say, if they could?

The researchers provided three choices for the answer to “do you want a blanket?” Each choice — “no change,” “take blanket off” and “put blanket on” — was associated with a symbol. Each symbol was painted on a white board.

Twenty-two horses representing several different breeds underwent full training and testing. They ranged in age from three to 16 years. All were riding horses, and some were also carriage horses.

They were all familiar with blankets, having used them at one time or another. But the circumstances under which each horse was blanketed was determined by care guidelines set by its owner.

Professional trainers used positive reinforcement techniques during the course of the experiment.

First, the horses were trained to touch the symbol boards with their muzzle.

Next, they taught the horse to associate donning a blanket with a symbol. Another symbol was used to associate the horse with removal of the blanket. Later in the training, the horses would also be taught to associate a third symbol with no changes to their current condition.

The horses were then taught, during different weather conditions, to associate the blanket symbol with their own comfort level.

Once the horses understood what the symbols meant, they were trained to understand they could make a choice, without influence from their handlers, about what they wanted, and that there was no wrong response.

With training complete, the researchers proceeded to “talk” to the horses about blanket preferences. This was done under different weather conditions to see if the horses behaved as predicted. For example, if it was cold, the horses would be expected to be more inclined to request blankets. In milder conditions, they’d be expected to indicate the blankets should be removed.

The horses did behave as predicted. For example, on one sunny day with temperatures around 72 degrees Fahrenheit (22 degrees Celsius), ten of the 22 horses were already wearing blankets. When asked to choose between the three symbols, all ten wearing blankets selected the “take blanket off” symbol. The remaining twelve selected the “no change” symbol.

The researchers also noticed a change in the horses’ behavior; when the horses realized they were able to indicate what they wanted to their handlers, they became more interested in training and testing activities, and showed more confidence, knowing that there were no wrong answers.

Each of these horses had a blanket on and were given a choice of “blanket off” or “no change.” In the left and middle images, taken in winter, both horses touch the blank “no change” board. The image on the right, taken during milder weather, shows a horse selecting the “blanket off” symbol. Image via Cecilie M. Mejdell.

In their paper, Mejdell and her team wrote:

Choices made by the horses could largely be explained from the level of thermoregulatory challenge experienced by them due to climatic factors as ambient temperature, wind and precipitation on the test days. This suggests that the horses not only became able to discriminate the three symbols and associate each of them with a specific outcome, but that they also were able to understand the effect a change in blanketing status would have on their thermal well-being. 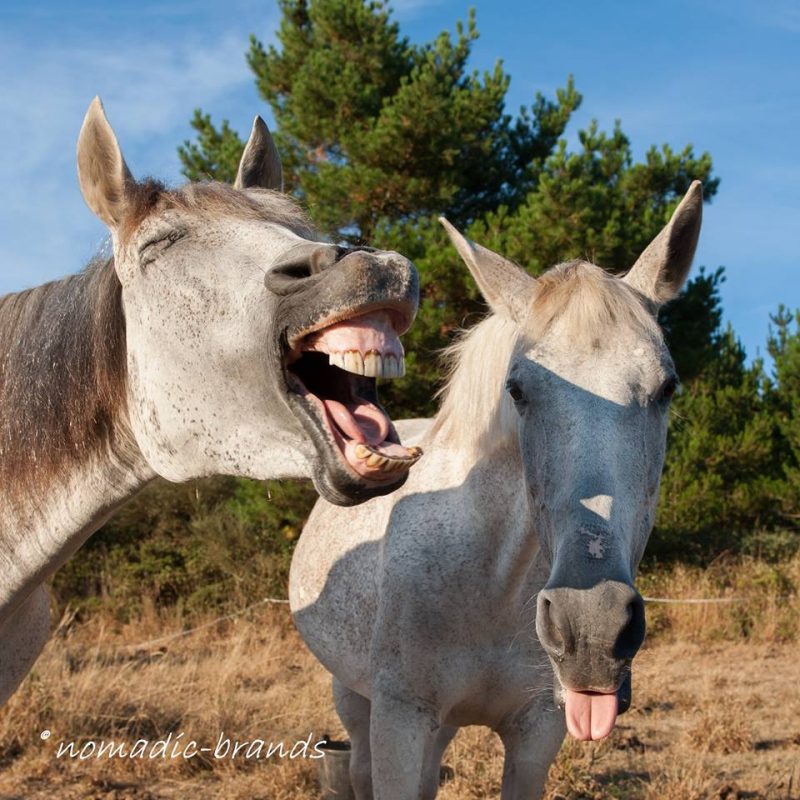 Canela (l) and Blanquita (r) sometimes express their opinions without symbols. These horses, by the way, weren’t part of the study, but are friends of the author of this post. Image via Dominique Brand.

While it’s pretty cool that horses can tell us what they prefer regarding blanketing, the choice they select may not necessarily be the right one for them, the authors pointed out. There are several considerations, such as the climate where the breed was first developed, the horse’s health, and skin conditions that could develop due to prolonged contact with blankets.

Bottom line: Horses can tell the difference between simple geometrical symbols, and can be trained to use the symbols to select from a choice of answers in response to a question.