How the parrots got its chat

New findings help explain how parrots, just like humans, can talk and dance.

Many animals – including seals, dolphins and bats – are able to communicate vocally. However, parrots are among a select few that can spontaneously imitate members of another species. A study has now pinpointed the region in the brain that may be allowing this to happen – the region that is also involved in controlling movement. The finding could perhaps also explain the fact that parrots, just like humans, can talk and dance.

We know that birds that can sing, including parrots, have distinct centres in their brain supporting vocalisations, called the “cores”. But, exclusively in parrots, around these there are outer rings, or “shells”. Surrounding this is a third region supporting movement. This is an older pathway that is shared by vertebrates. To find out more about what the unique shell system actually does, the research team analysed the expression of genes in these pathways in nine different species of parrot. They focused on ten genes that we know to be more active in the song regions of birds’ brains compared to other parts of the brain.

They found that parrots, when compared to other birds, have a complex pattern of specialised gene expression in all three parts of its brain. That means that most of the vocal learning that is specific to parrots, such as imitation, must be taking place in the shell region and the part of the brain that controls movements. This is surprising, as previous work had assumed that only the dedicated core system would be involved in vocal learning and that the shells had nothing to do with talking.

My own research has shown that it is the connections between brain regions controlling cognitive and motor skills that support language in humans.

The researchers also examined songbirds and hummingbirds and found that the shell regions were indeed unique to the parrots. However, they said future research would have to clarify the exact mechanisms involved in imitating.

That this shell system is observed in so many species of parrot – including in Keas, the most ancient species known – suggests that the vocalisation abilities evolved around 29m years ago. For comparison, that is more or less the time when humans’ ancestors are believed to have branched off from other primates.

The researchers hypothesise that this shell structure evolved after the core system for singing in birds was duplicated in the brain, with the shell centre developing new functions such as mimicking. So studying the shell structure in parrots could help us identify other mysterious duplications that could have led to certain brain functions in humans. 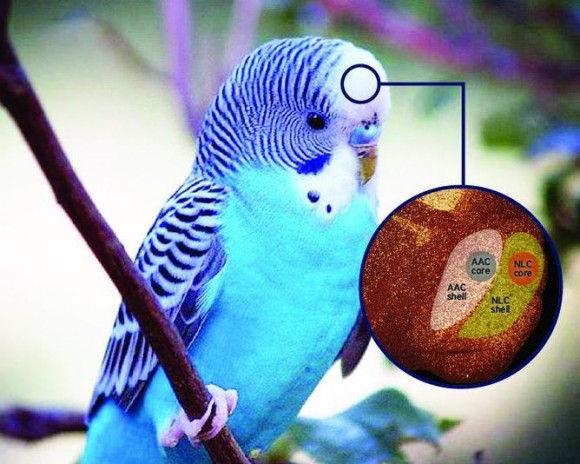 Might be hard to believe but parrots have a lot going on upstairs. Photo credit: Jonathan E. Lee, Duke University

Only parrots, humans and certain types of songbird can mimic other species. The fact that species as different as birds and humans share this behaviour is a clear example of “convergent evolution,” in which two species independently evolve structures supporting similar behaviours.

Imitation requires significant brain power and complex, specialised processes. For example, acoustic information must be represented, its organisation decoded and finally the sound reproduced. The complex specialisation of the core, shell and motor systems in parrots support these processes for imitation, enabling these species to couple auditory information from the environment with the finely grained behaviours necessary to produce them. There is currently no evidence suggesting that parrots have any special kind of articulators for producing spoken language. Rather, their brains seem to be doing the extra work.

Interestingly, the authors also note that humans and parrots belong to another select set of animals – those that synchronise body movements to the rhythms of beats while listening to music. That is, unlike almost every other animal in the world, parrots and humans spontaneously dance (strangely enough, that group also includes elephants which have also demonstrated an ability to move along with music).

In parrots, such dancing is associated with the non-vocal motor regions surrounding the shell – which supports the possibility of a general capacity for learning regularities in the sounds they hear and coupling them with behaviour.

The study is a big step forward in our effort to understand what makes parrots so different from other birds. Indeed, the researchers themselves say they were surprised that the brain structures they discovered had gone unrecognised for so long.