How sea level influenced evolution in the Galapagos

The Galapagos Islands, whose separateness was so pivotal to Charles Darwin’s contributions to the theory of evolution, are not separate at all when sea level is low. 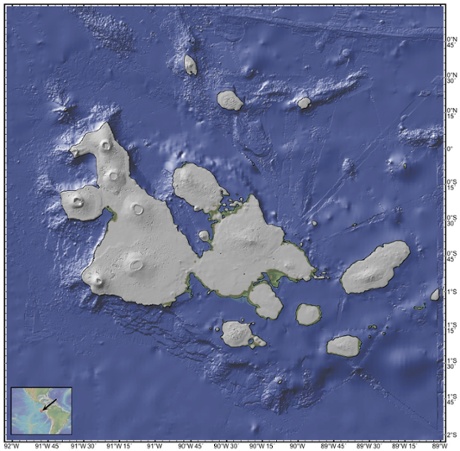 The Galapagos at 630,000 years ago. Snakes could have crawled between what Charles Darwin saw as islands “about 50 or 60 miles apart.” Reproduced from the Journal of Biogeography, John Wiley & Sons, via Henry Nicholls at theguardian.com

Henry Nicholls posted a very interesting article in theguardian.com this week about new research on historical shifts in sea level in the Galapagos. The research shows that those shifts, particularly the lows, may have had a major influence on evolution in the Galapagos. This research has a particular poignancy considering that Charles Darwin visited the Galapagos in the 1830s, noting unique creatures similar from island to island, but perfectly adapted to their environments. These observations led to Darwin’s 1859 book On the Origin of Species.

Nicholls is author of a new book called The Galapagos. He says modern researchers estimate that at the most recent low-point in sea level (around 20,000 years ago) would have placed the sea 144m below its current level. Because the waters are relatively shallow in the center of the Galapagos archipelago, the island we now call Santa Cruz would have been much, much larger and completely enveloped smaller islands like Baltra and Santa Fe. A researcher commented:

If you couldn’t exactly walk between all of the ‘core’ islands, you could just about skip or jump between them.

Nicholls reproduces the image at top from the Journal of Biogeography, which shows Galapagos 630,000 years ago. He notes:

Wow, it was just one big blob.

Snakes, for examples, would have no problem crawling between what Charles Darwin saw as islands “about 50 or 60 miles apart.”

Read Henry Nicholls’ article “How sea level influenced evolution in the Galapagos” at The Guardian.

Bottom line: New research shows that the Galapagos Islands, whose separateness was so pivotal to Charles Darwin’s contributions to the theory of evolution in the 1830s, have themselves evolved over time as sea level rises and falls. At times in the history of the Galapagos, the islands were not separate, but joined.