How plants manage the shift from winter to spring

How plants tolerate cold spells, and the effects of climate change on how plants manage the transition from winter to spring.

A late snowfall could set back the growth of this budding lilac. Image via oddharmonic/ Flickr.

By Richard B. Primack,Boston University

Weather patterns across the U.S. have felt like a roller coaster ride for the past several months. December and January were significantly warmer than average in many locations, followed by February’s intense cold wave and a dramatic warmup.

If you’ve ever seen lilac bushes crushed by snowdrifts, then budding on a warm day just a few weeks later, you may wonder how plants tolerate such extremes. I study how climate change affects the timing of seasonal events in the life cycles of plants, birds and insects in Massachusetts, so I know that species have evolved here to handle New England’s famously changeable weather. But a warming climate is disrupting weather patterns and testing the abilities of many species to adapt.

On brutal winter days when temperatures are far below freezing, animals hibernate underground or huddle in protected spots. But trees and shrubs have to sit there and take it. The tissues in their trunks, branches and roots are alive. How do they survive the freezing cold?

In autumn, woody plants in many parts of North America start preparing for winter. When their leaves change color and fall, their twigs, branches and trunks start to lose water. As a result, their cells contain higher concentrations of sugars, salts and organic compounds.

This lowers the freezing point of the cells and tissues, and allows them to survive temperatures far below the normal freezing point of water. The trick has its limits, though, so extreme cold events can still kill certain plants. 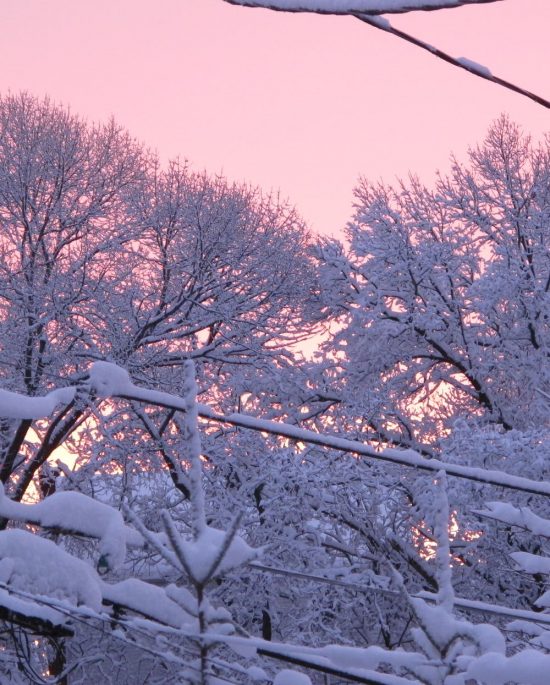 Trees in cold climates have evolved protections against ice and snow. Image via Richard Primack/ The Conversation.

Tree and shrub roots remain largely unchanged and inactive during winter, relying on insulation from snow and soil for protection. For the most part, the temperature of the soil around roots stays at or above freezing. Soil, fallen leaves and persistent snow layers insulate the ground above the roots and prevent it from losing heat.

The surprising danger of spring frosts

After plants stoically withstand cold winters, early spring brings new dangers. Plants need to leaf out as early as they can in spring to take full advantage of the growing season. But this involves pumping water into their developing leaves, which reduces the concentration of sugars, salts and organic compounds in their tissues and removes their winter protection from cold.

Each species has a characteristic leaf-out time. Early-leafing species such as blueberries and willows are the gamblers of the plant kingdom. Later species, like oak and pine, are the cautious and conservative types. For any species, leafing out too early is a risk because late frosts can damage or kill young leaves.

Flowers are also vulnerable to unpredictable spring frosts because they contain lots of water. If the flowers of fruit trees, such as apples, are killed by frost, the trees won’t produce fruit later in the summer. Late frosts also can cause disappointingly short flowering seasons for early-flowering ornamental plants such as forsythias and magnolias.

To guard against frost and still take advantage of the full growing season, trees and shrubs have developed three ways to know when it is time to start growing in spring.

First, plants have winter chilling requirements: They hold on to winter dormancy until they have been exposed to a certain number of cold winter days. This trait helps them avoid leafing or flowering during abnormally warm periods in midwinter.

Second, plants also have spring warming requirements that promote growth after they experience a certain number of warm days each spring. This feature helps them start to grow as soon as it is warm enough. 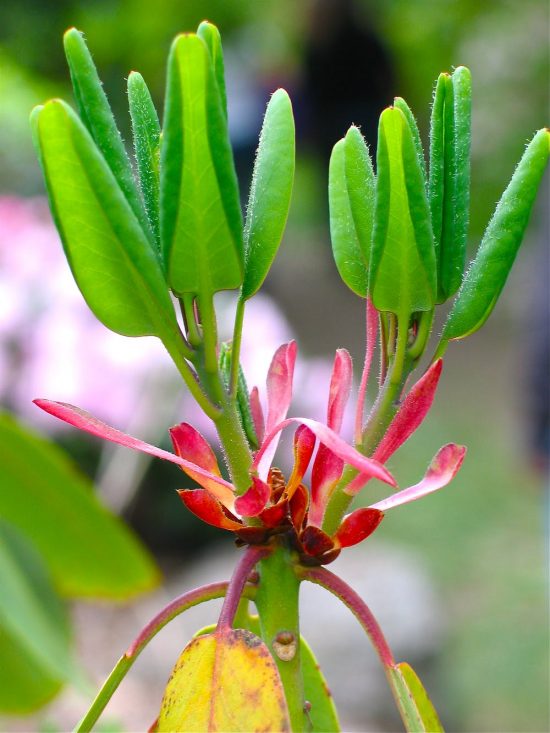 For woody plants like this rhododendron, the timing of spring leaf-out is a balance between maximizing their growing seasons and avoiding late frosts. Image via Richard Primack/ The Conversation

Third, some plants also have a photoperiod response, which means they react to the length of time they are exposed to light in a 24-hour period. This prepares them to leaf out as days get longer and warmer in the spring. Beech trees have both a warming requirement and a photoperiod response, but the temperature requirement is much stronger, so they get going after just a few warm days in late spring.

Plants are highly attuned to temperature signals, so warming driven by climate change is making it harder for many species to withstand winter cold and spring frosts. As spring temperatures get warmer than in the past, trees such as apples and pears may respond by leafing out and flowering several weeks earlier than normal. This can increase their vulnerability to late frosts. 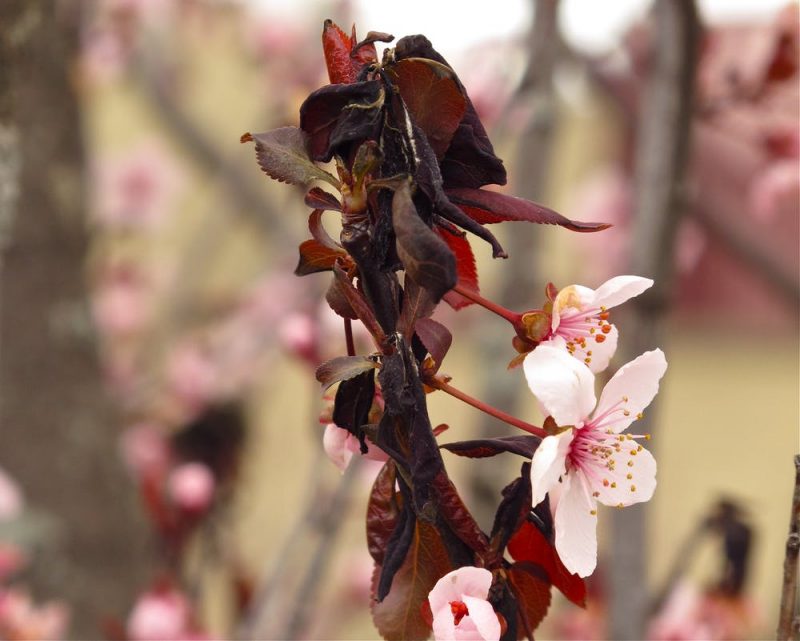 The leaves on this cherry tree have suffered damage from a late frost. Image via Richard Primack/ The Conversation

Such late frosts are becoming more common because climate change is destabilizing the jet stream, leading it to dip much farther south, bringing bursts of unusually cold weather.

In 2007, an exceptionally warm period in March triggered trees to leaf out across the eastern and central United States. A hard frost in April then killed the young leaves and flowers of oaks, hickories and other tree species. The trees were able to produce a second crop of leaves, but could not fully replace the leaves they’d lost, which quite likely stunted their growth for that year.

Warmer winters also lead to more days when the ground is bare. Cold snaps that occur when there is no insulating layer of snow can freeze the soil and kill roots. Tree and shrub branches then die back because the damaged roots cannot supply enough water and nutrients. In extreme cases, the plants may die.

The U.S. Department of Agriculture’s Plant Hardiness Zone Map shows that these zones – areas where various plant species are most likely to thrive – are shifting northward as climate change warms the U.S.

In coming decades, many cold-loving tree species such as spruces and firs will become less abundant when they are not able to handle new challenges associated with a warmer climate. In the Northeast U.S., native species such as sugar maple and beech will be gradually replaced by native species from farther south, such as oaks and hickories. And nonnative species, such as Norway maples, are taking advantage of these disruptions to disperse into forests from roadsides and neighborhoods.

Similar shifts are happening in many places as climate change alters the signals plants rely on to mark the changing seasons.

Bottom line: How climate change affects the way plants manage the transition from winter to spring, and their reaction to sudden cold spells.