Wolfe Creek Crater in Australia much younger than thought

A new study suggests that the Wolfe Creek Crater – situated on the edge of the Great Sandy Desert in northern Western Australia – is much younger than previously thought. Wolfe Creek Crater – known to Aboriginal people as Kandimalal – is the second-largest crater on Earth from which meteorite fragments have been recovered (the largest from which fragments have been recovered is Meteor Crater in Arizona).

Geologists think Wolfe Creek Crater was formed by the impact from a meteor that was about 50 feet (15 meters) in diameter and weighed around about 15,000 U.S. tons (14,000 metric tons). But exactly when the impact happened is poorly understood. Previous estimates have suggested the crater could be 300,000 years old. But a new study, published September 1, 2019, in the journal Meteoritics & Planetary Science says that the impact happened much more recently, only about 120,000 years ago. 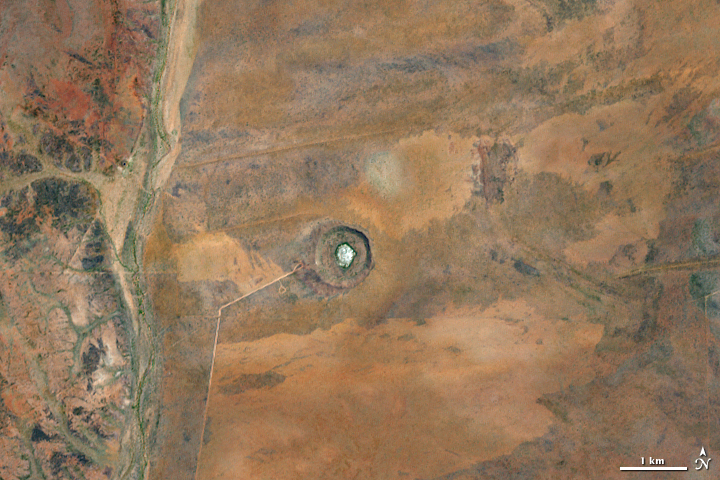 The team of researchers, from Australia and the U.S., calculated the new age of Wolfe Creek Crater using two dating techniques. First, the researchers collected samples from around the crater rim and applied what’s called exposure dating, which estimates the length of time that a rock has been exposed at the Earth’s surface to cosmic radiation.

They were also able to determine the age through a dating technique called optically stimulated luminescence, a dating technique used to measure how long ago sediment was last exposed to sunlight, on sand buried after the impact. Read more about how the scientists did the research here.

The researchers calculate that the maximum width of the crater is a little over half a mile (3,104 feet or 946 meters) in a northeast-southwest direction, reflecting the direction of the impact. The average diameter is 2,927 feet (892 meters). They also estimate that the crater is about 580 feet (178 meters) deep, and is filled by about 400 feet (120 meters) of sediment, mostly sand blown in from the desert. 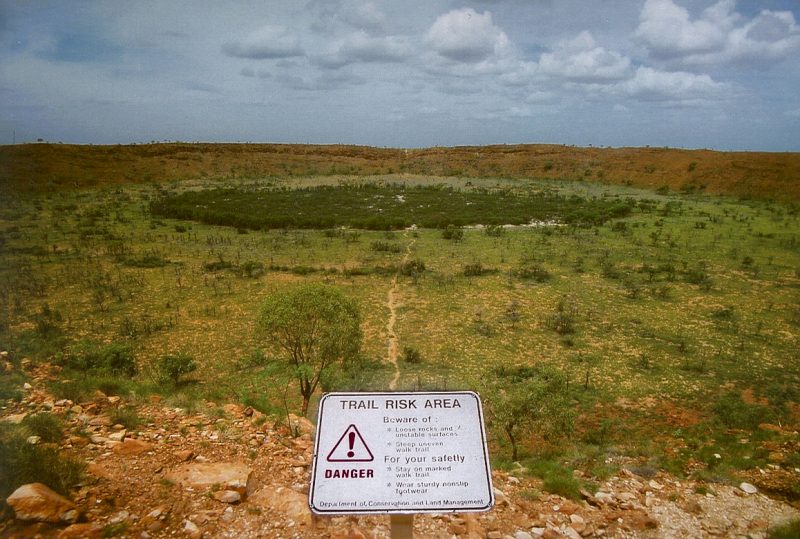 According to the researchers, Wolfe Creek Crater is one of seven sets of impact craters in Australia that date to within the last 120,000 years. Using this information, the researchers calculated how often these crater-producing events occur. University of Portsmouth geologist Tim Barrows led the new study. Barrows said in a statement:

Although the rate is only one large meteor hitting Australia every 17,000 years, it isn’t that simple. The craters are only found in the arid parts of Australia.

Elsewhere, the craters are destroyed by geomorphic activity like river migration or slope processes in the mountains. Since Australia has an excellent preservation record with dated craters within the arid zone, we can estimate a rate for the whole Earth. Taking into account that arid Australia is only about one per cent of the surface, the rate increases to one hitting the Earth every 180 years or so. There have been two big objects hitting the atmosphere in the last century – Tunguska in 1908 and Chelyabinsk in 2013.

This is a minimum estimate because some smaller impacts were probably covered by sand during the last ice age. The number of large objects the atmosphere is probably 20 times this number because stony meteorites are far more common but not as many survive the fiery journey through the atmosphere or effectively make craters. Our results give us a better idea of how frequent these events are.

Using the same geochronological dating techniques, the researchers recalculated the age of Arizona’s Meteor Crater. They say it is likely to be 61,000 years old, more than 10,000 years older than previously thought.

Bottom line: A new study suggests that Wolfe Creek Crater in Australia is much younger than thought.

Via University of Portsmouth