How mosquitoes find us

For mosquitoes, finding the next blood meal is all about smelling and seeing. It’s our breath that gives us away.

First they smell our breath, then they coming looking for us.

A new study, using behavioral experiments and real-time recording of the female mosquito brain, looked at how mosquitoes integrates signals from two sensory systems — visual and olfactory — to identify, track and home in on a potential host for her next blood meal.

Only female mosquitoes feed on blood. The new findings, published July 18, 2019, in the peer-reviewed journal Current Biology, suggest that an olfactory cue – a smell – triggers the mosquito brain to start scanning her surroundings for specific types of shapes and fly towards them.

The smell cue that the study focused on was carbon dioxide, or CO2. For mosquitoes, smelling CO2 is a telltale sign that a potential meal is nearby. Jeffrey Riffell is a University of Washington professor of biology and a co-author of the study. He said in a statement:

Our breath is just loaded with CO2. It’s a long-range attractant, which mosquitoes use to locate a potential host that could be more than 100 feet (30 meters) away. 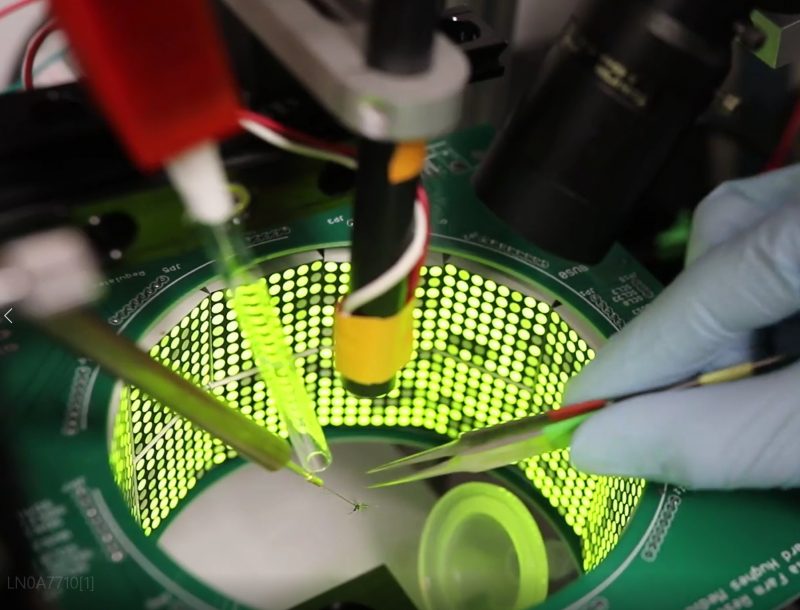 The team collected data from approximately 250 individual mosquitoes during behavioral trials conducted in a small circular arena, about 7 inches in diameter. A 360-degree LED display framed the arena and a tungsten wire tether in the middle held each mosquito. This is a top-view image of the arena, or flight simulator, used to present different visual objects and olfactory cues to tethered mosquitoes. More about how the scientists conducted the study. Image via Kiley Riffell.

That potential host could be a person or another warm-blooded animal. Prior research suggested that smelling CO2 can “prime” the mosquito’s visual system to hunt for a host. In this new research, the researchers measured how CO2 triggers precise changes in mosquito flight behavior and visualized how the mosquito brain responds to combinations of olfactory and visual cues. Riffell said:

We found that CO2 influences the mosquito’s ability to turn toward an object that isn’t directly in their flight path. When they smell the CO2, they essentially turn toward the object in their visual field faster and more readily than they would without CO2. 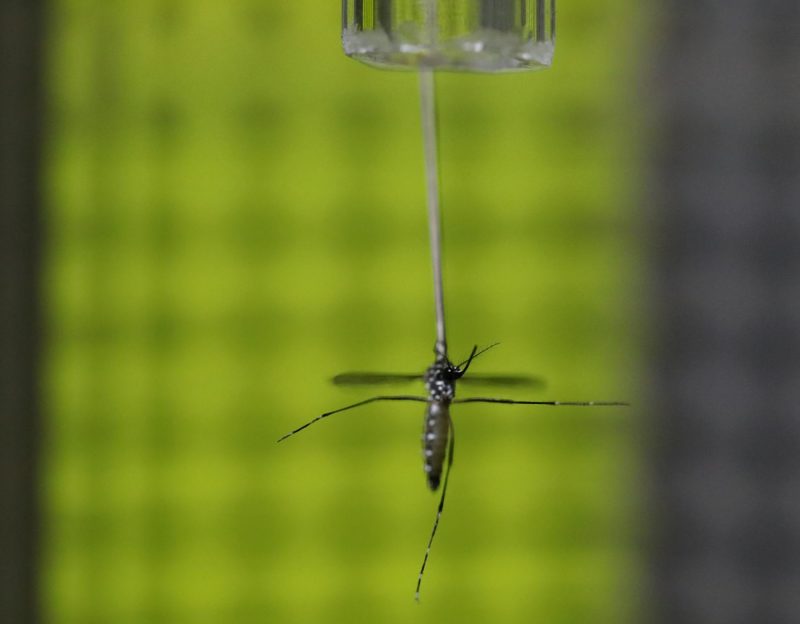 A tethered Aedes aegypti mosquito flying in the arena. Image via Kiley Riffell.

According to the study results, the mosquito sense of smell operates at long distances, picking up scents more than 100 feet (30 meters) away. But their eyesight is most effective for objects 15-20 feet (4-6 meters) away, said Riffell.

Olfaction is a long-range sense for mosquitoes, while vision is for intermediate-range tracking. So, it makes sense that we see an odor — in this case CO2 — affecting parts of the mosquito brain that control vision, and not the reverse.

Bottom line: Female mosquitoes use smell and sight to find their next blood meal.