How did snake venom evolve?

A new study looked a snake venom in order to learn how it evolved into the sophisticated and deadly cocktail of proteins it is today. 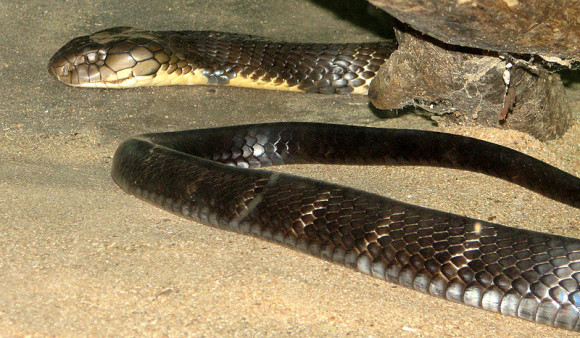 Researchers studying snake venom – with the goal of producing an anti-venom – say that snakes’ venom glands have co-opted many proteins that originally played more mundane roles elsewhere in their bodies. They studied snake venom via sequenced genomes of the deadly venomous King Cobra and the non-venomous Burmese Python, and compared the two to shed light on how each evolved. The Proceedings of the National Academy of Sciences published their work in December 2013.

These researchers – at Bangor University, the Liverpool School of Tropical Medicine and the universities of Leiden in Holland and Texas, Arlington – say their work provides “the first comprehensive insight into how snake venom evolved into the sophisticated cocktail of different proteins it is today.”

Snakebite is a major killer in many tropical nations tropical nations, causing thousands of deaths each year. Researchers hope their studies of snake venom will ultimately lead to an anti-venom that could save lives.

Click here to read more about the new study on snake venom, from Planet Earth Online.