The U.S. Southwest and Central Plains are at high risk for a megadrought later this century if greenhouse gas concentrations continue to rise, says a new study.

Megadroughts are persistent droughts that last for a decade or longer—they can be devastating to both natural ecosystems and human societies. Now, a new study has found that the southwestern and central plains regions of the United States are at high risk for a megadrought in the latter half of the 21st century if greenhouse gas concentrations continue to rise. The study was published in the journal Science Advances on February 1, 2015.

Currently, the southwestern U.S. and the central plains face a less than 12% chance of experiencing a megadrought, the scientists say. In the future, if greenhouse gases continue to rise at a high rate (i.e., atmospheric CO2 concentrations of about 1,370 parts per million by 2100), the risk for a megadrought in this region during 2050 to 2100 could skyrocket to 80% or greater. Even if greenhouse gas emissions were kept to more moderate levels, the risk for a megadrought may still be as high as 60%. 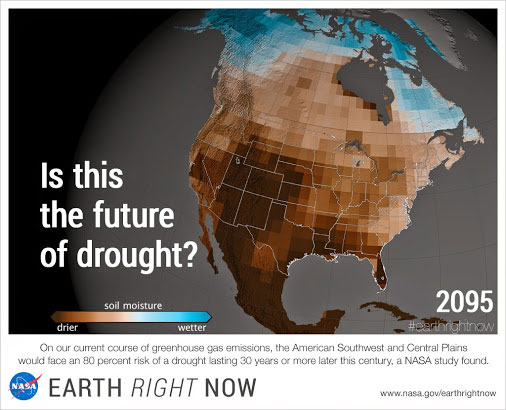 To estimate risks for future megadroughts, the scientists used 17 different climate models to project future changes in temperature, precipitation, evaporation, and soil moisture. The projections for drier conditions were very robust across the multiple modeling results. In general, future droughts will likely be driven by some combination of reduced precipitation and increased evaporation, both of which reduce soil moisture, but the intensity of each these drivers is expected to vary from region to region.

Benjamin Cook, lead author of the new study and climate scientist at NASA’s Goddard Institute for Space Studies, commented on the findings in a press release. He said:

Natural droughts like the 1930s Dust Bowl and the current drought in the Southwest have historically lasted maybe a decade or a little less. What these results are saying is we’re going to get a drought similar to those events, but it is probably going to last at least 30 to 35 years.

It is unclear how (and if) societies could adapt to the extended water shortages that would accompany a megadrought brought on by climate change.

Bottom line: A new study published in the journal Science Advances on February 1, 2015, estimates that the southwestern U.S. and central plains region have a 80% or greater chance of experiencing a megadrought in the latter part of the 21st century if greenhouse gas concentrations continue to rise at a high rate.