Roughly 400 firefighters are fighting the blaze today, which started two days ago and has spread fast about 15 miles (24 kilometers) west of Fort Collins.

The High Park Fire, currently the biggest fire burning in Colorado, is still burning out of control today (June 11, 2012) about 15 miles (24 kilometers) west of Fort Collins, Colorado. According to Colorado Daily, there is no containment of the fire, which has damaged or destroyed more than 100 structures. Roughly 400 firefighters are fighting the fire today. As of today, according to InciWeb just minutes ago, the fire had burned nearly 37,000 acres.

NASA’s Aqua satellite captured these images of the High Park FireThe top image is from June 9, 2012, the day the fire was discovered according to local news reports. The second image is just one day later (June 10). 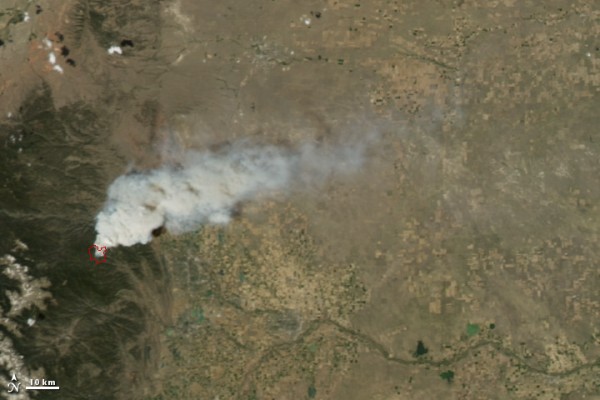 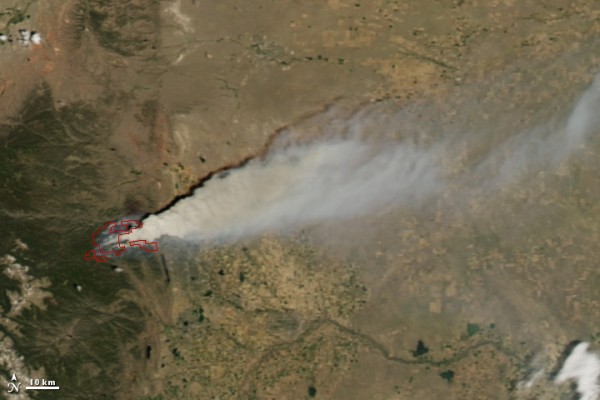 In these images, you can see thick smoke from the fire blowing eastward on both days, and covering a wider area on June 10.

It’s thought that stands of pine killed by beetles provided much of the fuel for this blaze.

Bottom line: The High Park Fire – about 15 miles or 24 kilometers west of Fort Collins – has burned about 37,000 acres as of today (June 11). Roughly 400 firefighters are battling the blaze today, which is burning out of control. The fire is thought to have started two days ago and to have spread rapidly in all directions, fueled by stands of trees killed by beetles. NASA’s Aqua satellite captured these images of the High Park Fire on June 9 and 10.