Scientists discover hidden biofluorescent universe on coral reefs with the use of cameras equipped with special light filters.

Among vibrantly colored coral reef fish, there are some fish with cryptic color patterns that stay relatively well hidden on the reef, or so we thought.

A new study published on January 8, 2014 in the journal PLOS ONE has found that reef fish that display cryptic colors in visible light often have biofluorescent color patterns that glow brightly when seen by certain other fish. Now, the search is on to find out how these marine fish use the biofluorescent colors to communicate. 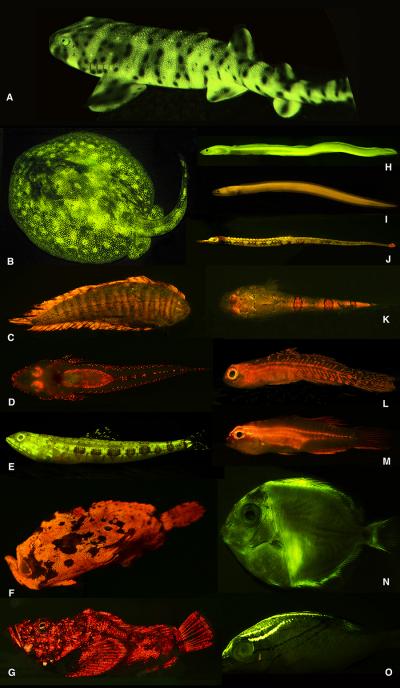 John Sparks, co-lead author of the study and a curator at the American Museum of Natural Hisotry, commented on the study in a press release. He said:

We’ve long known about biofluorescence underwater in organisms like corals, jellyfish, and even in land animals like butterflies and parrots, but fish biofluorescence has been reported in only a few research publications. This paper is the first to look at the wide distribution of biofluorescence across fishes, and it opens up a number of new research areas.

Biofluorescence differs from bioluminescence. In the former, an external light source is needed to elicit the glowing colors, whereas in the latter, the colors originate from within the organism via biochemical reactions. An analogy would be to envision a person wearing a green fluorescent colored shirt who is playing with a glow stick. Turn off the lights and voila—the glow stick will continue to glow because the light is being produced from inside the stick via the process of luminescence (although, technically this is a type of chemiluminescence and not bioluminescence). In contrast, the shirt will not be illuminated in the dark because with fluorescence, the object will only glow when there is an external light source present. When light is present, however, both of these processes are capable of producing familiar bright green, orange and red fluorescent colors.

Scientists photographed several species of fish from the Caribbean and the tropical western Pacific Ocean using LED lights and special light filters on their cameras that mimicked the yellow intraocular filters present in the lenses and corneas of many fish species. The presence of such filters in the eyes of fish suggested to the scientists that these fish may see things quite differently from what a person might see when snorkeling over a reef. Their hunch proved correct. Photographs of the fish turned up a variety of fluorescent color patterns on the fish.

David Gruber, co-lead author and an associate of Baruch College and the American Museum of Natural History, commented on the findings. He said:

By designing scientific lighting that mimics the ocean’s light along with cameras that can capture the animals’ fluorescent light, we can now catch a glimpse of this hidden biofluorescent universe. Many shallow reef inhabitants and fish have the capabilities to detect fluorescent light and may be using biofluorescence in similar fashions to how animals use bioluminescence, such as to find mates and to camouflage.

A total of 180 species of fish were discovered to have biofluorescent color patterns in this study, which suggests that this feature may be more widespread in fish than previously thought.

Biofluorescence was especially common on cryptically colored reef fish such as eels, lizardfish, scorpionfish, blennies, gobies and flatfish. The scientists think that these fish may be using the biofluorescence to either camouflage themselves among patches of biofluorescent algae or coral (see the scorpionfish and bream in images A and B below) or to communicate their presence to other members of their own species. If fish use biofluorescence to communicate their presence, this technique may offer fish a sort of “private” communication signal because some predators may lack the ability to see the fluorescent colors. 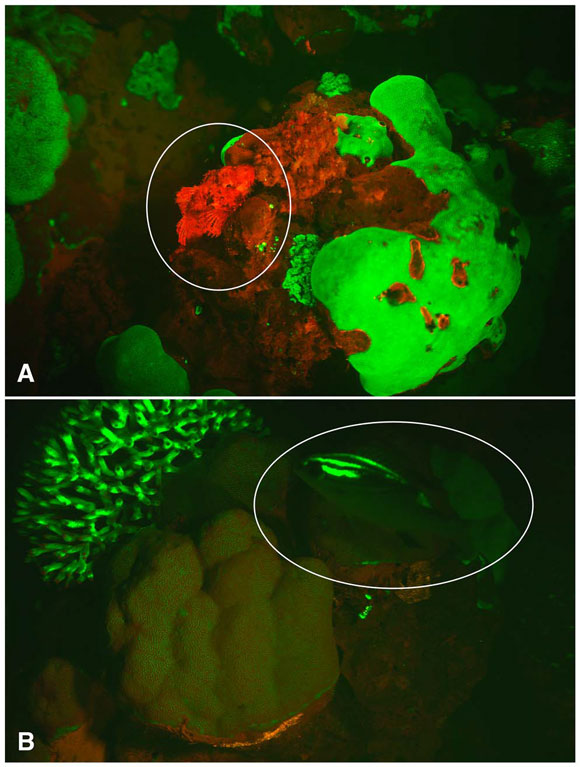 More research on this exciting scientific finding is sure to follow.

The research was funded by the American Museum of Natural History, the City University of New York, the National Science Foundation, the National Institutes of Health, and the National Geographic Society. Other co-authors of the study included Robert Schelly, Leo Smith, Matthew Davis, Dan Tchernov, and Vincent Pieribone. 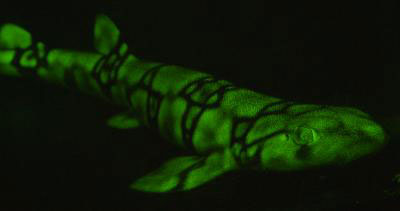 Bottom line: A new study published on January 8, 2014 in the science journal PLOS ONE has found that reef fish that display cryptic colors in visible light often have biofluorescent color patterns that glow brightly when seen by certain other fish. The fish may be using the fluorescent colors to help them find mates or to camouflage themselves, the scientists say.