This Pacific island is the most plastic-polluted place on Earth

Explore remote, uninhabited Henderson Island in the South Pacific. It may look idyllic from above, but is littered with millions of tons of plastic.

This Earth Day 2018 is focused on plastic pollution, and Henderson Island – a remote, uninhabited South Pacific island whose sandy beaches are World Heritage sites – was announced in 2017 to have the highest density of plastic rubbish on its shores of anyplace in the world.

The video above was released by ESA Web TV on April 20, 2018. It features a recent Sentinel-2 satellite image of Henderson Island, which is located about halfway between Chile and New Zealand. From high above, you could imagine this place as the idyllic South Pacific island it must have been a century ago.

But a June 2017 study published in the peer-reviewed Proceedings of the National Academy of Sciences paints a different picture. Conservation biologist Jennifer Lavers at the Institute for Marine and Antarctic Studies at the University of Tasmania led the study, which estimated some 37.7 million items of debris on Henderson Island. That’s 671 items per square meter (about 671 items for every 11 square feet), together weighing 19.4 tons (17.6 metric tons), on Henderson Island.

Lavers and co-author Alexander Bond at the Centre for Conservation Science in the UK had surveyed the island’s North and East Beach for three months in 2015. Lavers later told ABC News in Australia that the 17.6 metric tons of plastic debris estimated to be on Henderson Island accounted for just 1.98 seconds’ worth of the current annual global production of plastic.

She said the amount of rubbish was such that it took a five-person team six hours to survey a 100-square-foot (10-square-meter) section of the beach.

Plastic can be carried by ocean currents for long distances. It can form rubbish patches or eventually be washed up on shores far from where it entered the ocean. On Henderson Island, the scientists found items from as far afield as Russia, the U.S., Europe and South America. 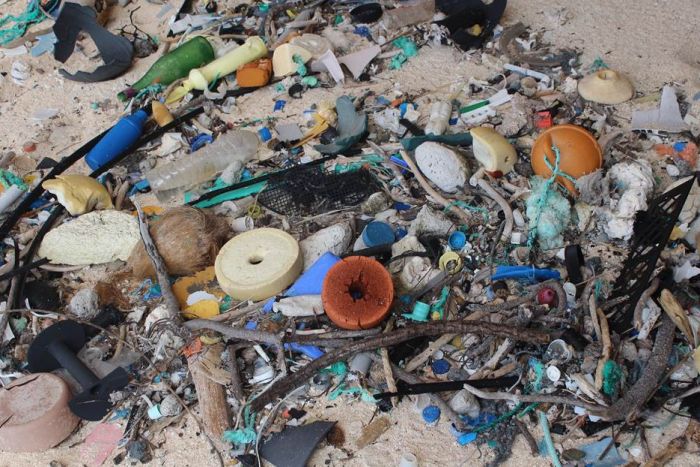 The researchers said that most of the items found on Henderson Island’s beaches were everyday household items. Image via Jennifer Lavers.

Bottom line: Henderson Island in the South Pacific was found in 2017 to have the highest levels of plastic pollution on its shores of anyplace on Earth.

Source: Exceptional and rapid accumulation of anthropogenic debris on one of the world’s most remote and pristine islands

Via ESA and ABC.net.au