A deadly heatwave has gripped India since April. The death toll has now risen to more than 1,100. Cooling monsoon rains are not expected for several more days. 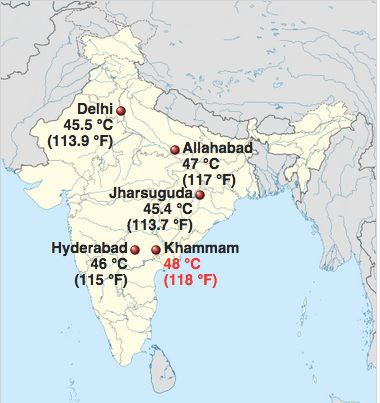 The death toll is still climbing in India, where a powerful and deadly heat wave has killed more than 1,100 people so far in April and May, 2015. It is occurring during the Indian dry season, which typically lasts from March to May. According to CNN, India recorded its highest maximum temperature of 47 degrees Celsius – 117 degrees Fahrenheit — at Angul in the state of Odisha on Monday, May 26. Meanwhile, Wikipedia is reporting 48 degrees C. – 118 degrees F. – at Khammen in the state of Telangana on May 24. Either way … it is hot, and the hot, dry conditions are being made worse by winds blowing in from Pakistan’s Sindh province across the northern and central plains of India. The most vulnerable are the poor, the homeless, the elderly and people who work outside. The situation is made worse by the fact that about one-third of India’s 1.2 billion population do not have access to reliable power.

Among the worst-hit states are Andhra Pradesh and Telangana in the south. The northern states of Rajasthan and Haryana are also reeling from the intense summer as is India’s capital, New Delhi, CNN said.

Cooling monsoon rains are expected soon, hopefully by the end of May.

Watch: This road in Delhi melted due to scorching heat https://t.co/loRaAPTxTF pic.twitter.com/9oaJ3lCUQ3

The National Disaster Management Authority of India advises the following to minimize the impact during the heat wave and to prevent serious illness or death due to heat stroke:

– Avoid going out in the sun, especially between 12 noon and 3 p.m.
– Drink sufficient water and as often as possible, even if not thirsty
– Wear lightweight, light-colored, loose, and porous cotton clothes. Use protective goggles, umbrella/hat, shoes or chappals while going out in sun.
– Avoid strenuous activities when the outside temperature is high. Avoid working outside between 12 noon and 3 p.m.
– While traveling, carry water with you.
– Avoid alcohol, tea, coffee and carbonated soft drinks, which dehydrates the body.
– Avoid high-protein food and do not eat stale food.
– If you work outside, use a hat or an umbrella and also use a damp cloth on your head, neck, face and limbs
– Do not leave children or pets in parked vehicles
– If you feel faint or ill, see a doctor immediately.
– Use ORS, homemade drinks like lassi, torani (rice water), lemon water, buttermilk, etc. which helps to re-hydrate the body.
– Keep animals in shade and give them plenty of water to drink.
Keep your home cool, use curtains, shutters or sunshade and open windows at night.
– Use fans, damp clothing and take bath in cold water frequently.

Bottom line: A deadly heatwave has gripped India since April. CNN reported yesterday (May 26, 2015) that the death toll has risen above 1,100.