Satellite imagery shows thick haze blanketing eastern China in early November 2011, coinciding with reports by The New York Times and the U.S. Embassy in Beijing of heavy air pollution in the area.

The Moderate Resolution Imaging Spectroradiometer (MODIS) on NASA’s Terra satellite captured this natural-color image on November 10. The haze extends southward from Beijing along the coastal plain bordering Bo Hai and the Yellow Sea. 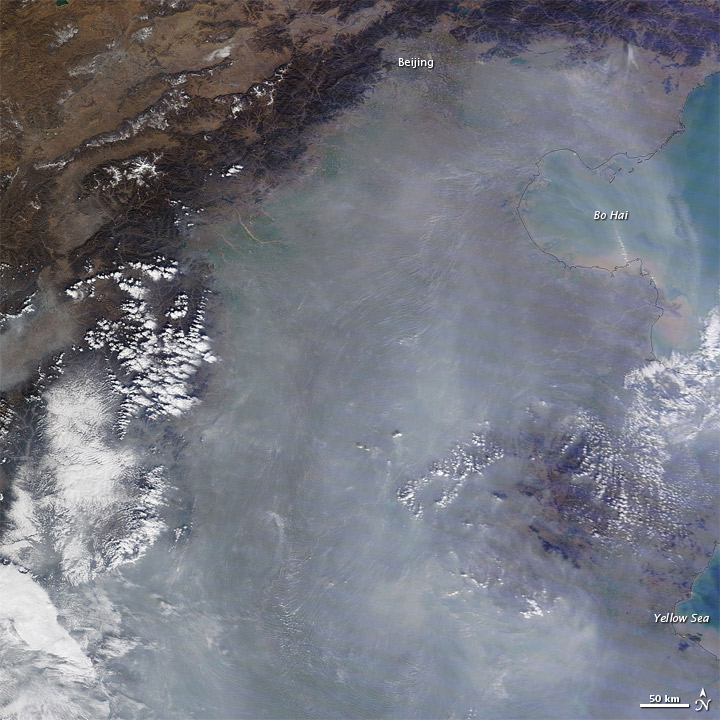 Intermittent haze had clogged the skies over eastern China for at least a month by the time MODIS acquired this image. In early November 2011, The New York Times reported that Beijing had suffered from heavy air pollution for weeks, and the United States Embassy in Beijing had repeatedly registered unsafe levels of particulate matter.

Airborne particles come in different sizes, often measured in microns (also micrometers): one-millionth of a meter. Whereas Beijing’s air-monitoring center has traced particles at 10 microns or larger, the U.S. Embassy in Beijing has measured smaller particles, down to a size of 2.5 microns, known as PM2.5, according to news reports. This has caused a discrepancy in air-quality assessments, with the U.S. Embassy classifying pollution levels as hazardous on days when the local government classifies pollution levels as moderate or slight, said The New York Times.

Particles with diameters of 2.5 microns or smaller are believed to pose the greatest health risks because they can lodge deeply in the lungs, according to the U.S. Environmental Protection Agency.

On November 11, 2011, People’s Daily reported that China’s vice-minister of environmental protection described the country’s air pollution standards as “rather lax.” People’s Daily further reported that the government was discussing implementing PM2.5 readings, and hoped to lower fine-particle pollution by about 10 percent by 2015.

Bottom line: Imagery from NASA’s Moderate Resolution Imaging Spectroradiometer (MODIS) on the Terra satellite shows haze on November 10, 2011, extending southward from Beijing along the coastal plain bordering Bo Hai and the Yellow Sea. The haze coincides with reports from the U.S. Embassy in Beijing and The New York Times of hazardous air pollution levels.