Bat-lovers take note! A new study suggests that the incidence of rabies in bats is much lower than previous estimates – only one per cent. Here’s my take on it. 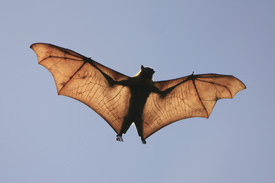 In the interest of full disclosure, I confess: I have a soft spot for bats. They are adorable, like little flying chihuahuas. When I heard of a study by University of Calgary researchers claiming that bats are not as disease-ridden as the stigma suggests, it seemed like a great excuse to write a positive blog about one of my favorite critters.

But as they say, the devil is in the details so I decided to take a closer look ….

According to the UC scientists, the rabies rate for bats is not as high as previous estimates have indicated. They suggest that the number of bats with rabies is close to one per cent, regardless of species or where the bats roost.

They said that previous studies have suggested that about 10 per cent of bats taken by the public to be tested have rabies, and that the prevalence of rabies in bats has been known to vary greatly, depending on the species and how often that species is around people. I found a slightly different number from the U.S. Centers for Disease Control, which says that 6 per cent of bats have rabies. Here’s a great page of info about bats and rabies from the CDC.

Two different studies were conducted by the UC scientists. One involved collecting the carcasses of migratory tree-roosting hoary bats (Lasiurus cinereus) and silver-haired bats (Lasionycteris noctivagans) killed by wind turbines in Southern Alberta, and having them tested for rabies. These species are reported to have some of the highest incidences of rabies in North American bats. However, among the bats collected for testing, none of the hoary bats had rabies, and they found only one per cent incidence of rabies in the silver-haired bats.

Well, that’s encouraging news, if you live in Southern Alberta. But how do those statistics compare with those across North America?

That’s where the second study comes in. The UC team combed through scientific papers and government reports, over a 56 year span, from North America. They were trying to figure out, how did the incidences of rabies correlate with the natural behavior of bats? Was it higher for bats that lived in man-made structures like buildings and bridges, or in bats that roosted in trees and caves? Was rabies more widespread among bats that lived in large colonies, or in those that were solitary? And how was the information collected: were the tests run on bats brought in by anxious people, or by randomly testing bats collected in the wild?

For example, people are more likely to turn in bats found in occupied buildings and bridges because that’s where most human-bat encounters occur; that translates to a large number of bats with a higher proportion of healthy animals. In that pool, the incidence of rabies was found to be about 4.2 per cent. On the other hand, the odds of encountering and turning in a bat that roosts in trees, caves, and rock crevices are slim, except if the bat is acting strangely, appears sick, or is dead — in that case, the odds of it being a rabies-infected bat becomes much higher, generally found to be about 7.8 per cent.

Also to consider is how the data was collected. Bats turned in by the public had about a 6 per cent prevalence of rabies. But bats that were randomly collected in the wild were typically 0.8 per cent rabies-positive — that represents the prevalence of rabies in naturally-found populations, and that’s a lot of bats!

As you can see, there are a lot of variables to consider in trying to determine the incidence of rabies in bats. But interestingly, in a statistical analysis that considered all these different factors, the UC team came up with the same result they found in Western Alberta: in general, across North America, when considering the bat population as a whole, about one per cent of all bats have rabies.

But wait, it’s not that simple.

The more relevant question is, what are the odds of a person encountering a bat with rabies? In other words, which bat demographics is the best barometer for assessing the risk of rabies exposure to people? That would be the bats turned in for testing by the general public, which typically has a rabies prevalence of about 6 per cent. Exactly what the CDC said.

Bats aren’t the only reservoirs for rabies. The most frequently reported rabies sightings are of raccoons, followed by bats, skunks, and foxes. However, the most common source of human rabies in the United States is from bats. But it’s important to put things in perspective; assuming that 6 per cent of bats have rabies, that’s still a very small number. The odds of coming in direct contact with saliva or brain/nerve tissue from an infected bat are even slimmer. And if you’re unsure if you were bitten or otherwise exposed, quickly starting a preventative regimen of medications, if deemed necessary by a doctor, makes the chances of contracting rabies extremely unlikely.

Having said that, common sense must always prevail. If you encounter a bat, or for that matter, any other wild animal, don’t handle it unless you know what you’re doing.

Since the background rabies rate in bats is low, less than one percent, people should focus more on the ecosystem services they provide without worrying that every other bat has rabies. This is especially important right now because bats are facing some heavy threats, like wind turbines and white nose syndrome. With that said, healthy bats normally don’t come in contact with people, so those that do are more likely to be sick, so we’re not encouraging people to go out and handle them.

Bats are such precious little fellas. I wish more people could see how beautiful they are, and put the rabies fears in proper context. When I was in college at the University of Texas, I used to help Derek and Bev Wills, astronomers at the Department of Astronomy, rescue Mexican free-tail bats that occasionally became trapped in the Physic/Math/Astronomy building. We’d carefully trap them in boxes (with holes for ventilation), and at dusk, we’d head up to the roof of the building to set them free. I’ll always treasure one memorable experience; this one little fella was sound asleep when we opened the box. He woke up, slowly yawned, and stretched his little wings. Then he looked at each of us, turning his little head from one person to the next, and went “Uh oh!” and took off like a bat out of hell. LOL! I’ve been smitten by bats ever since! 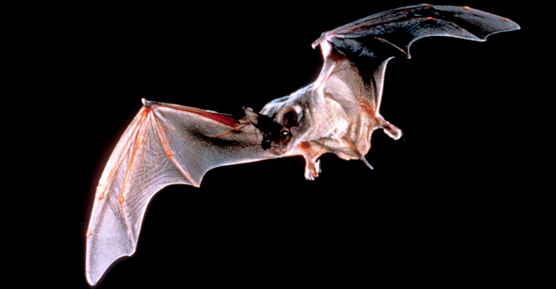 So take note fellow bat-lovers! A new study from the University of Calgary suggests that the incidence of rabies in the general bat population is much lower than previous estimates –- only one per cent. But we need to assess the risk to humans by considering the incidence of rabies in bats most commonly encountered by people. In that context, I’m more comfortable sticking with the CDC’s value of 6 per cent.