Projections suggest submerged debris from 2011 Tohoku earthquake and tsunami in Japan should have reached Midway Atoll, at northwestern end of Hawaiian archipelago.

UPDATE FEBRUARY 13, 2012 As the one-year anniversary of the devastating March 11, 2011 earthquake and tsunami in Japan approaches, scientists are continuing to track the tons of debris washed into the ocean by these natural disasters.

The red circle marks the location of Midway Atoll, at the northwestern end of the Hawaiian archipelago.

Submerged debris is still slowly floating toward Hawaii and the U.S. west coast, with debris expected to strike Hawaii in 2012 and the west coast of the continental U.S. in 2013. Although the debris cannot be seen in the ocean depths, Dr. Jan Hafner from the University of Hawaii told Radio Australia’s Pacific Beat on February 1, 2012 that computer projections suggest it has reached as far as the Midway Atoll, at the northwestern end of the Hawaiian archipelago. According to the projections, he said:

We have a limited knowledge of what is the composition, and that is a major problem because we don’t know what to expect.

He added that the latest news received is from the U.S. state of Washington, where, in late December 2011 and early January 2012, beachcombers found some light, floating buoys which are from Japan.

Scientists have now deployed hundreds of high-tech devices to help monitor the path of the debris, which could be hazardous to ships, marine life and coastlines.

DECEMBER 29, 2011 Debris washed to sea from the Tohoku tsunami – which struck Japan following the 9.0-magnitude earthquake on March 11, 2011 – has added some millions of tons of weight to the Great Pacific Garbage Patch and is now sweeping toward the California coast, which it might reach sometime in 2013. But the first U.S. landfall for the debris will happen sooner, according to predictions by scientists at the National Oceanic and Atmospheric Administration.

Carey Morishige is the Pacific Islands Regional Coordinator for the NOAA Marine Debris Program. She spoke to NOAA’s Making Waves podcast about debris from the 2011 Japan tsunami.

The Japanese debris – which NOAA scientists say is partially submerged beneath the ocean surface and dispersed over a wide area – will come “fairly close” to the Northwest Hawaiian Islands in northern hemisphere winter 2011/2012.

In other words, it could be any day now.

That’s according to Carey Morishige of the NOAA Marine Debris Program. NOAA’s National Ocean Service Making Waves podcast released an interview with her on December 16, 2011.

Shortly after the March 2011 earthquake and tsunami struck, large fields of debris could be seen floating in the ocean. But very soon, the debris fields had dispersed. Some is now floating below the ocean surface. Some has surely been broken into small bits by sunlight, wind and water. Morishige said:

As of April 14 [2011], we were not able to track that debris anymore because of the fact that it dispersed so much. The satellite imagery we have access to right now is not able to detect a single piece of debris floating in the ocean.

Debris floats in Pacific Ocean shortly after March 2011 Japanese earthquake and tsunami. The debris field soon dispersed and can no longer be seen or tracked. But computer models suggest it is still heading toward Hawaii and the U.S. West Coast. Image Credit: U.S. Navy

Yet computer models indicate the debris is still floating, with its path largely determined by currents and wind. The models also indicate the debris is fanning out into a wider and wider area. But there’s still a lot of uncertainty over exactly what is floating, where it’s located now, and when and where (or even if) it will make landfall. NOAA researchers have now teamed up with the U.S. Environmental Protection Agency, U.S. Fish and Wildlife Service, and other partners to coordinate data collection activities. There are also ways the public can help: look for the email address at the bottom of this post.

Exactly what’s in this debris? Is any of it radioactive? Carey Morishige said radioactivity is probably not an issue since the tsunami carried most of the debris seaward before the failure of Japan’s Fukushima Daiichi nuclear reactor.

However, as it receded from Japan’s coastline, the tsunami washed much of whatever was loose in the inundation zone into the ocean. That includes whole boats, pieces of smashed buildings, appliances, and plastic, metal, and rubber objects of all shapes and sizes. Some of this debris sank, and some floated out to sea. The Japanese government estimated that the tsunami generated 25 million tons of rubble, but not all of that debris is headed our way, and statements in the media earlier this year that “20 million tons” of debris are headed for U.S. shores are “unfounded,” Morishige said.

Another shot of debris in the ocean, taken shortly after the 2011 Tohoku tsunami that devastated a coast of Japan. Image Credit: U.S. Navy

So what exactly is the danger? Without knowing exactly what’s in the debris, Morishige said, it is hard to estimate the danger. But her team will be looking for hazardous materials, for example. In a worst-case scenario, Morishige said, boats and other heavy objects could wash ashore in sensitive areas, damage coral reefs, or interfere with navigation in Hawaii and along the West Coast. The best-case scenario is that most of the debris will break up, disperse and eventually degrade. 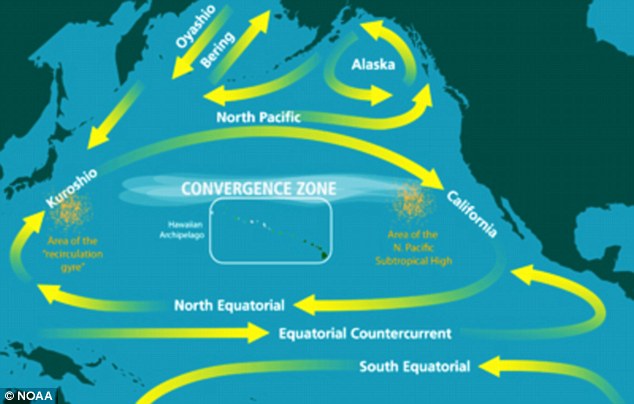 Ocean currents – specifically the North Pacific Gyre – will carry the floating debris from Japan to the U.S. West Coast and back again. Image Credit: NOAA

Ocean currents are now guiding the fate of the Japanese debris. Morishige said:

Computer models predict the debris will likely reach the California coast sometime in 2013, then head back across toward the main Hawaiian islands, reaching the islands sometime around 2015.

Then we would know for sure that what our models are predicting is actually where the debris is ending up.

She said that the public can help address this problem in two ways. The email for both activities is mdsightings (at) gmail.com. First, you’re travelling by ship anywhere in the North Pacific Ocean and spot floating marine debris, you can report what you saw, and when and where you saw it. Second, if you live along the U.S. West Coast, Hawaii, or Alaska, you can track marine debris over time along the shoreline. Use the email above to request a copy of NOAA’s marine debris shoreline survey field guide.

Bottom line: Debris washed to sea by the major tsunami that struck Japan following the March 11, 2011 earthquake is making its way across the North Pacific Ocean. Scientists at NOAA believe it will pass close to Hawaii in winter 2011/2012 – in other words, soon. This debris is partially submerged and dispersed, and it is no longer visible. NOAA is hoping to get some real-time sightings of the debris. The public can help, too.