Thirty two groups of scientists in 20 countries analyzed 28 weather disasters in 2014 – and found half of them linked to human-caused climate change. 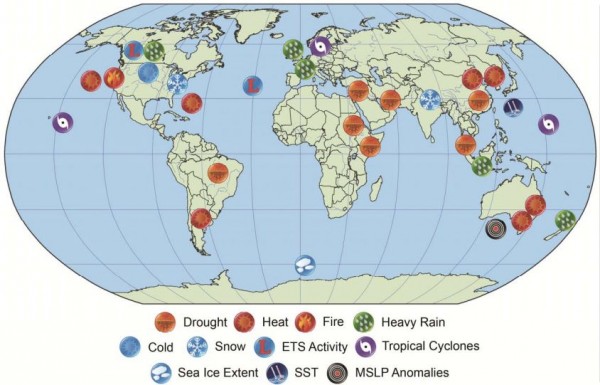 The sorts of weather events covered by the report. Image via NOAA.

Until a few years ago, it was a truism in science that it was difficult, if not impossible, to link specific weather events to human-caused global warming. Recently that has changed. On November 5, 2015, NOAA announced a new report – published by the Bulletin of the American Meteorological Society – in which 32 groups of scientists from more than 20 countries investigated 28 individual extreme weather events in 2014 and concluded that human-induced climate change played some role in half of them. A November 5 statement from NOAA says:

Human activities, such as greenhouse gas emissions and land use, influenced specific extreme weather and climate events in 2014, including tropical cyclones in the central Pacific, heavy rainfall in Europe, drought in East Africa, and stifling heat waves in Australia, Asia, and South America …

The report is called Explaining Extreme Events of 2014 from a Climate Perspective.

The November 5 statement from NOAA explained:

When a climate change influence is not found it could mean two things. First, that climate change has not had any appreciable impact on an event. Or, it could also mean that the human influence cannot be conclusively identified with the scientific tools available today.

A number of this year’s studies indicate that human-caused climate change greatly increased the likelihood and intensity for extreme heat waves in 2014 over various regions. For other types of extreme events, such as droughts, heavy rains, and winter storms, a climate change influence was found in some instances and not in others.

The report this year added analysis on new types of events including wildfires and Antarctic sea ice extent, and it looked at how land use patterns may influence the impacts and severity of such events.

In addition, several papers in this year’s report have integrated other human influences besides climate change. For example, a study of a flood in Canada showed that human land use changes, as well as global warming led to an increase in severity and likelihood in the flood.

Although a statement on the report can be found at NOAA.gov, I saw it first at NationalGeographic.com. In case you haven’t heard, NatGeo was recently purchased by Fox in $725 million deal and has been undergoing layoffs this week, so it’s impressive that they got this story up.

Meanwhile, the report itself is an important step forward in adapting to climate change. Stephanie C. Herring, PhD, lead editor for the report at NOAA’s National Centers for Environmental Information, said: 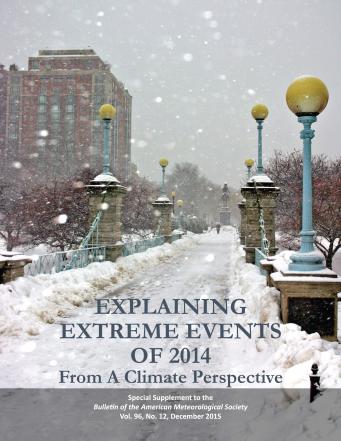 This report links that half of weather disasters to human-caused climate change. Download the report here. Image via NOAA.

Bottom line: Thirty two groups of scientists from more than 20 countries investigated 28 extreme weather events in 2014. Their report – published by the Bulletin of the American Meteorological Society – links human-induced climate change to half the events. View the full report online.