A push for climbing reform after Sherpa deaths on Everest

In the wake of the deaths of 16 Nepalese guides on Mount Everest in April 2014, many groups push for reform of climbing expedition practices. 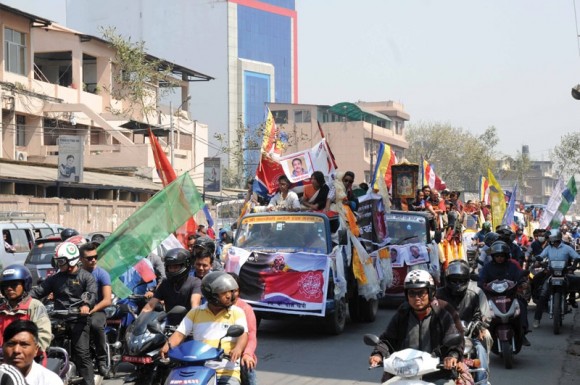 A funeral procession in Kathmandu for one of the Sherpas killed in an April, 2014 avalanche on Mount Everest. Photo credit: Nepal Mountaineering Association

This article is republished with permission from GlacierHub. This post was written by Ben Orlove and anthropologist Pasang Yangjee Sherpa of Penn State.

A major workshop in late August 2014 represents a significant change in the debates about climbing expeditions on Mount Everest, with significance across the Himalayas and beyond.

The Participatory Workshop on Roles, Responsibilities & Rights of Mountaineering Workers, held on August 29 and 30 in Kathmandu, emerged from the unsettled outcome of the tragic accident of April 18, when 16 Nepalese guides were killed at the Khumbu Icefall on Mount Everest. The spot is well-known as a particularly dangerous part of the route to the summit. It goes over an area in which a glacier descends a cliff so steep that the ice cannot flow smoothly, but rather becomes divided by criss-crossing crevasses into segments, many as large as big houses,which can break off and come crashing down.

In essence, an icefall is to a glacier what a waterfall is to a liquid river. Everest contains many other challenges to climbers, including thin air, long ascents and changeable weather, but this icefall is particularly treacherous.

Only 13 of the bodies were recovered before weather conditions caused the cancellation of the search for the others. The guides were predominantly Sherpa, members of a Himalayan ethnic group with longstanding ties to the mountain, who have provided the core guides since the earliest expeditions of the 1920s. 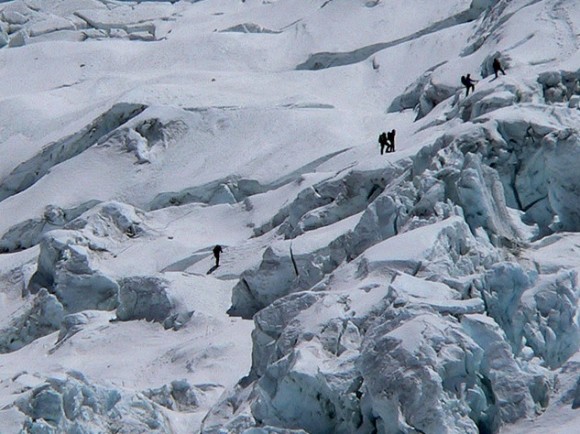 The Khumbu Icefall is a notoriously dangerous part of Mount Everest. Sixteen Nepalese guides died here on April 18, 2014 in one of the worst accidents in the mountain’s history. Photo credit: Mahatma4711

Some were offended that the government offered only scanty compensation to the families of the victims, barely enough to pay for the funerals. The major climbing organization, Nepal Mountaineering Association, also reacted negatively. The government lobbied to make sure that the climbing season—and the flow of valuable foreign revenue that it brings—would continue.

In sum, the incident revealed once again the strong economic and cultural divisions that have long plagued the climbing expeditions, in which wealthy foreigners make large payments to the Nepalese government and to climbing firms, while the local guides, who face life-threatening risks as they traverse the dangerous terrain year after year, receive low pay. The divisions are not as extreme as they were decades ago, when the guides called the foreigners “sahib” and were treated as personal servants. Most foreign climbers now treat the guides with personal respect, and some of the guides have opened climbing firms and equipment companies themselves.

Nonetheless, the work is very dangerous; hundreds have died on the mountain. The pay remains poor, and the guides are repeatedly sent into the most dangerous conditions to prepare the trail for the foreigner tourists. 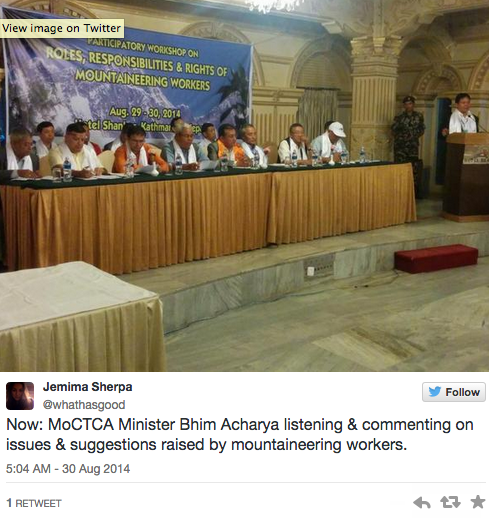 On April 21, eight of the victims were brought to Kathmandu and were cremated in a traditional Buddhist ceremony. The following day, the Sherpa guides stated that they would cancel their participation in climbs for the rest of the 2014 season, to show respect to the victims and to the long history of dangerous, under-compensated mountaineering work. The large majority, though not all, foreign climbers were in agreement with this decision, even though it put into suspension several hundred climbing permits, each of them worth about $10,000.

In response, the Nepalese government provided additional payments to the families of the victims, although these were still insufficient, considering the living costs in Kathmandu. 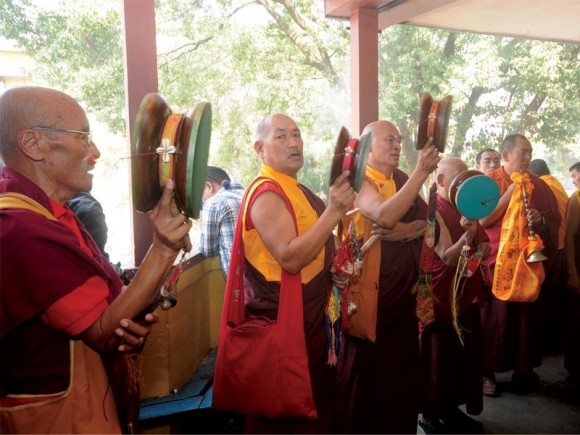 Monks at funeral on April 21, 2014 in Kathmandu for the guides killed a few days before in an avalanche”. Photo credit: Nepal Mountaineering Association

The August workshop was hosted and facilitated by Mountain Spirit (MS), a Nepali NGO working for the mountain peoples, and supported by the Nepal National Mountain Guide Association (NNMGA), the Nepal Mountain Instructors Association (NMIA), Khumjung School Alumni Association (KSAA) representing the graduates of a school founded by Sir Edmund Hillary, and the Sherpa Adventure Gear clothing company. The 40 participants at this workshop represented mountaineering workers from eight different mountain districts with a range of experiences, from some who had newly entered the profession to others whose mountaineering careers began in the 1970s.

The mountaineering workers were recognized as a key group whose presence in discussing, drafting, reviewing, and implementing new policies and procedures would be necessary for the continued development and progress of the mountaineering industry.

The workshop called for a reconsideration of payment to the guides, insurance and safety conditions. Proposals were aired to provide training for guides whose injuries prevent them from climbing. Participants suggested that the government should select regional officers with strong local ties and mountaineering background to provide liaison to link the government agencies with Sherpa guides and their communities. The issue of search and rescue operations remained the subject of contention, since the government has been more willing to mobilize efforts to rescue foreigners than Nepalese, and since guides do not receive insurance to pay for their rescue in the case of accidents. 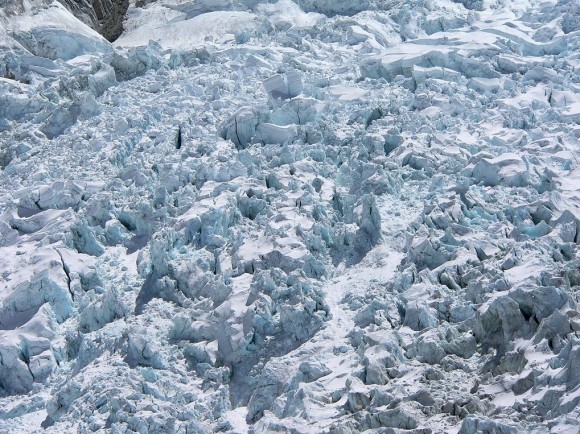 A workshop in August, 2014 by many climbing organizations hopes to prevent disasters like the one on the Khumbu Icefall in April. Photo credit: Mahatma 4711

On the second day, proposals from the workshop were presented to the audience that included expedition operators and government representatives. Also in attendance was the Minister of Culture, Tourism and Civil Aviation, whose agency issues climbing permits for the highest peaks in the Nepalese Himalayas including Everest. Dr. Lhakpa Norbu Sherpa, an advisor to the Mountain Spirit, addressed the audience. He highlighted that MS, a small local organization, is putting its effort and membership fees to support this important discussion of ways to make Nepal’s mountaineering tourism more sustainable and just.

The meeting was in some ways inconclusive. A government official remarked:

Like lovers who can’t speak what is in their heart, we aren’t open in discussions and regret it once we go home. 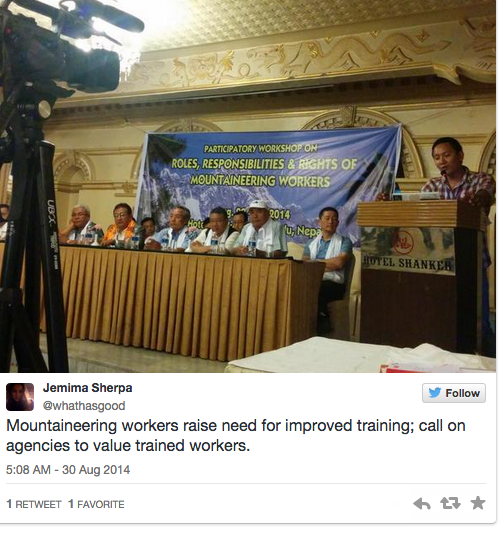 This workshop demonstrates the great power that glaciers and mountains exercise on the human imagination. For decades, Mt. Everest, the highest mountain in the world has been managed as if two groups had special authority there: the wealthy adventurers who claim that they, as representatives of all humanity, should be able to travel there, and the Nepalese officials, who speak in the name of a government that claims sovereignty over the routes to the peak.

In addition to the mountaineering workers, the workshop represents a recognition of a third group, the Sherpas, in whose traditional territory the mountain lies and whose knowledge, experience and, historically, hard labor has been essential for the completion of ascents.

It may also come to represent an opportunity for reflection and renegotiation for people in other mountain regions as well.

For further discussion of tensions between government-managed tourism and local communities, see this post on Peru.

Bottom line: The Participatory Workshop on Roles, Responsibilities & Rights of Mountaineering Workers, held on August 29 and 30, 2014 in Kathmandu, emerged from the unsettled outcome of the tragic accident of April 18, when 16 Nepalese guides were killed at the Khumbu Icefall on Mount Everest.