The oceans’ apex predators – great white sharks – are also among the longest-lived marine animals, according to new research by marine biologists at NOAA’s Northeast Fisheries Science Center and the Woods Hole Oceanographic Institution. The journal PLOS ONE published their paper on January 8, 2014. The scientists reported that radiocarbon dating studies had revealed that one of the sharks in their study was 73 years old when it died. The scientists said their work suggests increased age at maturity for some sharks, making them more sensitive to fishing pressure than previously thought.

Past research had placed lifespan estimates on great whites at about 23 years.

However, researchers knew that age estimates, based on the analysis of alternating opaque and translucent deposits on shark vertebrae, were difficult to interpret. It wasn’t clear how those features related to a shark’s growth rate. Were the bands created annually, or were they related to other yet-unknown growth characteristics in sharks? 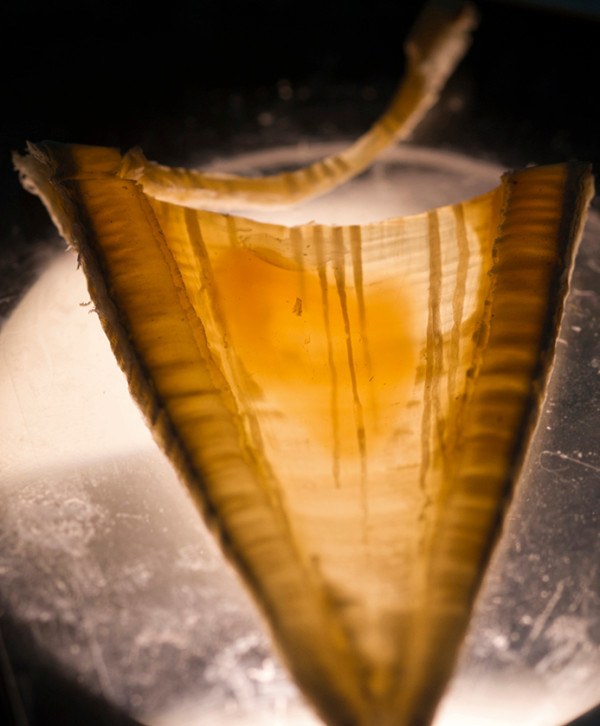 Alternating opaque and translucent bands are used to chronicle the growth of great white sharks. But the story told by the bands is not always clear. Image via Tom Kleindinst, Woods Hole Oceanographic Institution.

Lisa Natanson is a fisheries biologist in the Apex Predators Program at NOAA’s Northeast Fisheries Science Center, and one of the scientists involved in this study. She said, in a press release:

Age-ing sharks has traditionally relied on counting growth band pairs, like tree rings, in vertebrae with the assumption that band pairs are deposited annually and are related to age. In many cases, this is true for part or all of a species’ life, but at some point growth rates and age are not necessarily in sync. Growth rates slow as sharks age. Deposition rates in vertebrae can change once the sharks reach sexual maturity, resulting in band pairs that are so thin they are unreadable. Age is therefore frequently underestimated.

Using vertebrae from eight sharks — four males and four females — caught in the northwest Atlantic Ocean between 1967 and 2010, the scientists set out to determine the time intervals between the opaque-translucent deposit pairs using radiocarbon dating, a method for dating biological specimens by determining its ratio of carbon-14 to carbon-12. Samples were processed using an accelerator mass spectrometer, an instrument that directly measures the number of carbon-14 and carbon-12 atoms.

The researchers used a specialized radiocarbon dating technique, called bomb radiocarbon dating, that utilizes timestamps based on the amount of carbon-14 released into the atmosphere by aboveground nuclear testing from the early 1940s to early 1960s. Distinctive carbon-14 to carbon-12 ratio signatures can be correlated with known dates to provide better age estimates for a sample. Growth bands deposited on a living shark’s vertebrae during those periods would show a relative increase in carbon-14.

Bomb radiocarbon dating revealed that one male shark was about 73 years old when it died. The other three males were 9, 14, and 44 years old, and the females were estimated to be 6, 21 and 32 years old at death. The researchers also found that the opaque-translucent vertebrae bands were laid down annually in small- and medium-sized great white sharks, but as the animals got older, the bands were deposited too tightly to be distinguished. 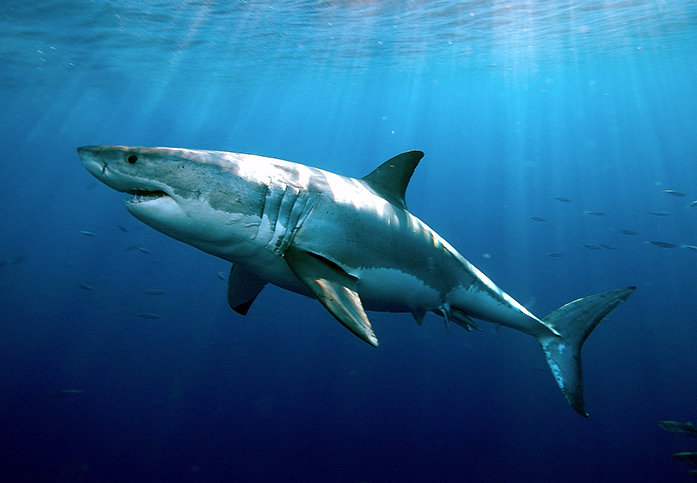 The International Union for Conservation of Nature Red List of Threatened Species flags great white sharks as a “vulnerable” species. Natason sums up the implications of these results in her press release:

With lifespan estimates of 70 years and more, white sharks may be among the longest-lived fishes. Sharks that mature late, have long life spans and produce small litters have the lowest population growth rates and the longest generation times. Increased age at maturity would make white sharks more sensitive to fishing pressure than previously thought, given the longer time needed to rebuild white shark populations.

What is radiocarbon dating?