Researchers had their hands (and boat) full after a routine shark count turned into a close encounter with a great white.

It isn’t unusual for great white sharks to leap out of the water as they ambush seals from below the surface. But when a shark jumps onto your boat deck, it’s quite unexpected.

Yet, according to the Guardian, this is exactly what happened to an unlucky team of researchers aboard the vessel The Cheetah while working near Seal Island on South Africa’s Cape coast on July 18, 2011.

It had been a fairly ordinary day of “chumming” (throwing bait over the side of the boat to attract sharks) to conduct a population study, when a three-meter (10-ft) shark suddenly breached the water’s surface and plopped down onto the boat.

Apparently the shark was no more pleased with this turn of events than were the scientists and immediately tried to retreat, but its panicked thrashing merely lodged it further into the boat’s deck. It took over an hour and plenty of tools to get the confused animal back to sea.

And if it happened to you. Here’s how to troubleshoot in the event that your boat is besieged by a flailing half ton fish. In other words … here’s how the crew of The Cheetah handled the crisis: 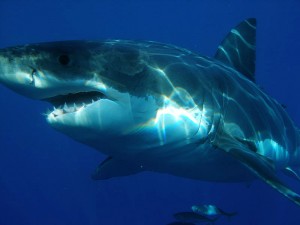 Step 2) Keep the shark alive by pouring water over its gills while you enlist the help of another boat. Tie ropes to the shark’s tail and have the second boat pull it into the water.

Step 3) If this fails, have your shark-laden boat towed back to port so that the fish can be removed with a crane. Be sure to keep those gills from drying out; the research team said they placed a hose into the shark’s mouth at this point.

Step 4) Make sure the shark can find its way back to the open sea (this one couldn’t, and beached shortly after being placed back into the water. Otherwise you’ll need to tie ropes to the shark’s tail again and tow the beast further away from the harbor. Once you’re far enough out, cut the ropes and take the rest of the day off.

Scientists can only speculate as to what would cause a shark to jump onto a boat. Personally, I’m betting the shark was aiming to promote the Discovery Channel’s upcoming Shark Week.

How to attract lots of sharks and count them