A preliminary overview of at least 16 tornadoes that struck parts of northern and eastern Texas on May 15, 2013. 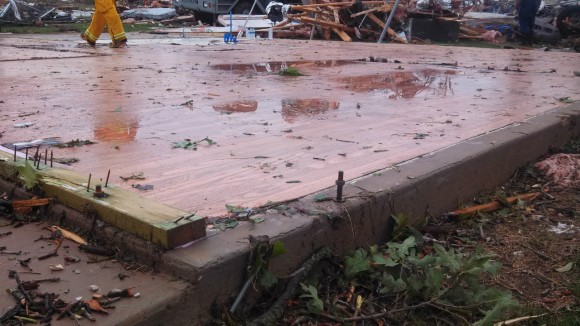 On Wednesday (May 15, 2013), severe storms pushed through parts of northern and eastern Texas, causing significant damage and destroying many homes across the Dallas-Fort Worth area. Sixteen tornadoes have been confirmed by the National Weather Service (NWS) in Fort Worth, Texas. But that number could change as the NWS gathers more information regarding the damage that took place. The NWS continues to collect data, talk with emergency officials and responders, and review radar data, pictures, and videos, and there’s a possibility that the NWS could confirm more than 16 tornadoes for this event.

This post includes some of the preliminary findings released by the NWS and shows some of the incredible damage that took place on the evening of May 15, 2013.

Dallas News posted an incredible interactive website that shows the before and after damage in Granbury, Texas. 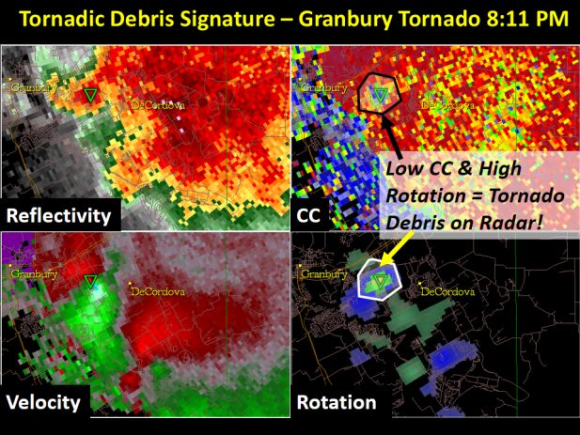 NWS Dallas- Fort Worth showing the radar images of the EF-4 tornado that struck Granbury, Texas. You can clearly see the debris in these images thanks to Dual-Pol radar. Image Credit: NWS

The tornado that hit Granbury in Hood County,Texas was rated as an EF-4 tornado, which means that it had winds of at least 166 miles per hour. After looking at some of the photographs coming out of the Granbury area, it appears to me that this tornado was likely on the high end of an EF-4 tornado and could possibly become an EF-5. Houses were completely destroyed, some completely wiped out with only the slab left where the house once stood.

EF-4 damage can be associated with most houses being completely destroyed. But when you approach EF-5 territory, with winds greater than 200 mph, houses are not only destroyed, but the debris from the house has been blown away from the area and nothing is left where the house once stood. For now, I believe the NWS will likely keep the rating at EF-4 damage. However, we won’t find out until the NWS officially finishes their survey and analysis. This tornado produced widespread EF-3 damage, with isolated areas of EF-4 damage. Six people have died and over a hundred people were injured in this storm. Many people are now without their homes. There are still reports of people missing after the tornado crushed Granbury this past Wednesday.

Overview of the tornado that struck Granbury, Texas on May 15, 2013. Image Credit: NWS

As of today, (May 17), the NWS has confirmed 16 tornadoes across northern and eastern Texas on May 15, 2013. You can view all of the tornado reports by clicking on this link. The majority of the tornadoes were weak, with ratings around EF-0 and EF-1 with wind speeds at or below 100 mph. However, an EF-3 tornado was confirmed in Cleburne and Johnson counties with peak winds around 140 mph. That tornado had a path length of 8.5 miles and was over half a mile wide at 1060 yards or 0.60 miles. 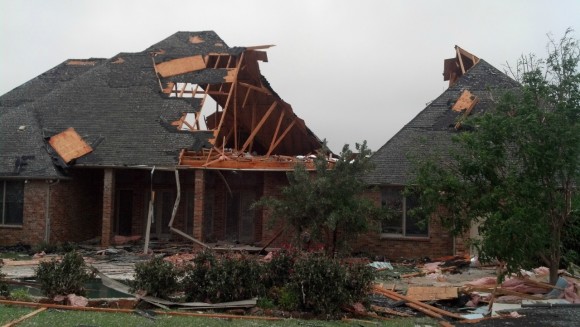 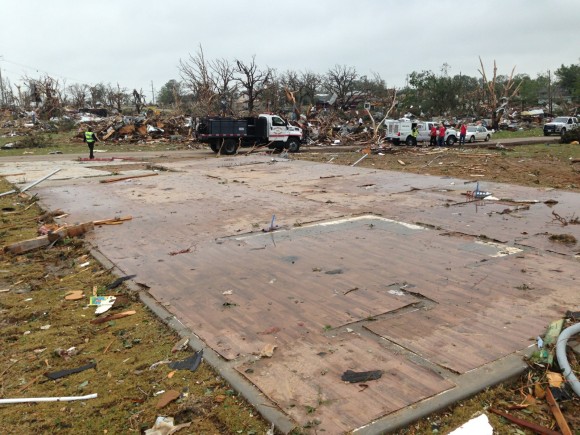 Bottom line: As of this morning (May 17, 2013), the National Weather Service has confirmed that 16 tornadoes hit parts of the Dallas-Fort Worth, Texas area on May 15, 2013. The Granbury, Texas tornado was rated an EF-4 with wind speeds near 200 mph. Meanwhile, an EF-3 tornado was confirmed in Cleburne and Johnson counties with peak winds around 140 mph. Hundreds of homes have been damaged or destroyed in the region, and residents are facing a major clean up that will take a long time. Unfortunately, severe weather is possible again on May 17 and 18, 2013, so it could halt the recovery efforts taking place in the damaged areas. Prayers go out to all of the victims that were affected by the storms.