Tortoise hatchlings spotted on the island of Pinzón last year are the first to have survived there in more than a century. Thanks to conservation efforts, tortoises are making a comeback.

In 2014, researchers discovered Galapagos tortoise hatchlings on the Galapagos island of Pinzón. The young tortoises are the first to have survived there in more than a century. It’s a sign that decades of conservation programs to protect the giant reptile are starting to pay off.

Gigantic tortoises were once common on the Galapagos Islands, but after many years of overhunting, habitat destruction, and disruption by non-native species, the population crashed. Now, thanks to the hard work of the Galapagos National Park Service and its collaborators, the tortoises are making a comeback.

The Galapagos Islands are located in the equatorial Pacific Ocean off the coast of Ecuador. The remote islands with their unique flora and fauna are famous for having helped inspire Charles Darwin’s theory of evolution. The Galapagos tortoises are among the islands most iconic species.

Scientists estimate that 250,000 tortoises once inhabited the Galapagos Islands prior to the 16th century. In the 19th century, the tortoises were hunted heavily by whalers that often visited the islands. Moreover, some of their habitat was converted to agricultural land by early settlers. Humans also introduced non-native species to the islands like goats, which compete with the tortoises for food, and rats, which prey on the tortoise eggs and hatchlings. All of these factors took a heavy toll on the tortoise population. By the 1970s, only about 3000 tortoises remained. 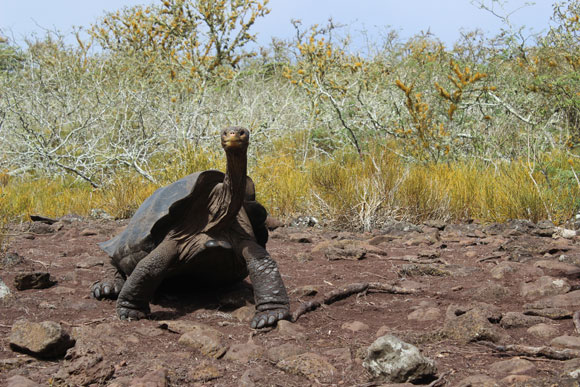 Galapagos tortoise on the island of Pinzon. Image appears courtesy of James Gibbs.

In attempt to boost the Galapagos tortoise population, several conservation programs were put in place. For example, large areas of the Galapagos Islands are now protected parkland and park officials collect tortoise eggs and rear the hatchlings in captivity until the young tortoises are large enough to withstand a rat attack. To date, approximately 6,200 tortoises have been successfully reared and released back onto the Galapagos Islands.

In 2012, rats on the island of Pinzón were eradicated through the use of poisoned bait. During a follow up survey on the island in 2014, James Gibbs reported seeing several young tortoises. He said:

During our treks around Pinzón, the team also found many young hatchlings, a truly exciting find as they are the first hatchlings to survive on Pinzón in more than a century. Once black rats were introduced to Pinzón in the late 1800s, they preyed on 100 percent of tortoise hatchlings. This new bunch of “little guys” is one of the important results of the rat eradication campaign, tangible proof that with dedication, hard work, support, and heart, conservation efforts can effect positive change.

James Gibbs is a professor with the State University of New York’s College of Environmental Science and Forestry. You can read more about his field experience at his guest blog here. 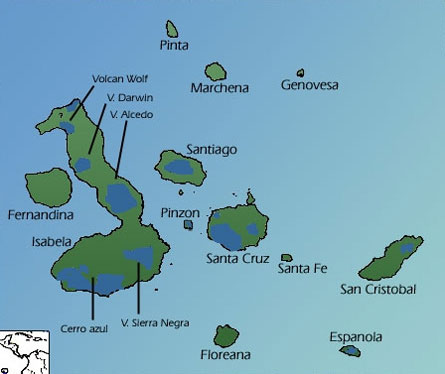 Blue colors show the distribution of tortoises on the Galapagos Islands. Image Credit: Minglex via Wikimedia.

Today, the tortoise population size has increased to 20,000 individuals. Clearly, the conservation programs are starting to pay off. 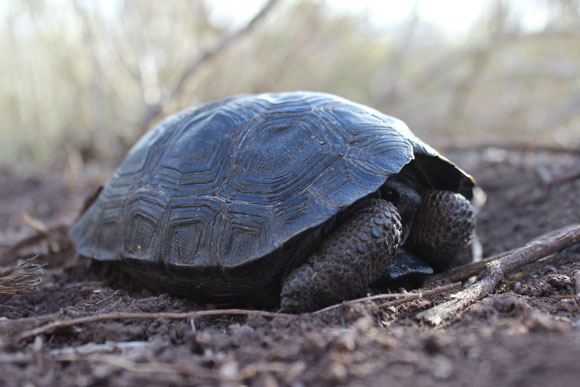 Young tortoise on the island of Pinzon. Image appears courtesy of James Gibbs.