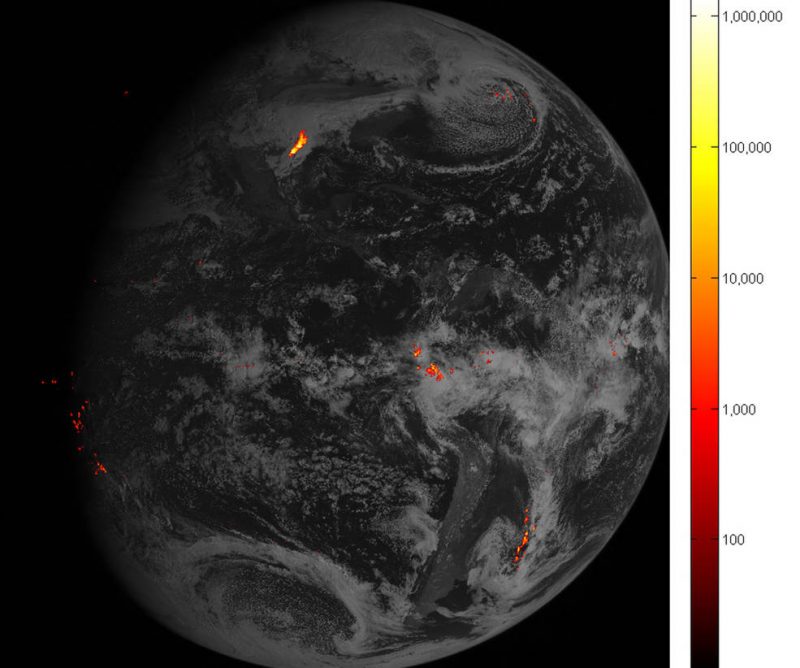 NASA released the image above – and video below – on March 6, 2017. They are from the first lightning detector in a geostationary orbit, the Geostationary Lightning Mapper (GLM) aboard the GOES-16 satellite, launched on November 19, 2016.

In the video below, the Lightning Mapper captured lightning over southeast Texas on February 14, 2017. Houston is indicated by the green cross and green dotted lines indicate the Texas coastline. This animation, rendered at 25 frames per second, simulates what your eye might see from above the clouds. As NASA said:

The mapper continually looks for lightning flashes in the Western Hemisphere, so forecasters know when a storm is forming, intensifying and becoming more dangerous. Rapid increases of lightning are a signal that a storm is strengthening quickly and could produce severe weather.

During heavy rain, GLM data will show when thunderstorms are stalled or if they are gathering strength. When combined with radar and other satellite data, GLM data may help forecasters anticipate severe weather and issue flood and flash flood warnings sooner. In dry areas, especially in the western United States, information from the instrument will help forecasters, and ultimately firefighters, identify areas prone to wildfires sparked by lightning.

NASA had more to say about the GLM, which you can read here.

Bottom line: NASA has released the first images from the Geostationary Lightning Mapper aboard GOES-16.