GOES-14 weather satellite is drifting 0.90 degrees per day. It’ll take all of October to drift to the place where the ailing GOES-13 satellite is now. 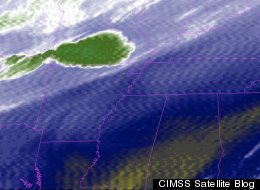 The ailing GOES-13 satellite acquired this image before it was placed in standby mode. The image shows some of the interference, or noise, that was affecting the satellite’s imagery. Credit: CIMSS Satellite Blog.

As mentioned in a previous post, the GOES-13 satellite – a major weather satellite for the U.S. East Coast and Atlantic Ocean – experienced issues with data from its imager and sounder instrument. It was forced to go offline on September 23, 2012. Since then, GOES-14 has been the satellite replacing GOES-13 while NOAA tries to fix the problems. On October 1, 2012, GOES-14 began to drift eastward to replace GOES-13 since engineers have been unable to fix the issues plaguing the satellite.

To prevent loss of information due to the issues with GOES-13, NOAA decided to provide GOES-14 an East Drift Start Maneuver to provide better data during the GOES-13 anomaly recovery. In this process, GOES-14 will simply drift to the east to where GOES-13 is located.

It is still unknown if GOES-13 will ever fully recover, which makes you wonder what, if anything, we will hear about the satellite in the near future. For now, GOES-14 continues to drift east until it meets its destination – the place where GOES-13 is located now. 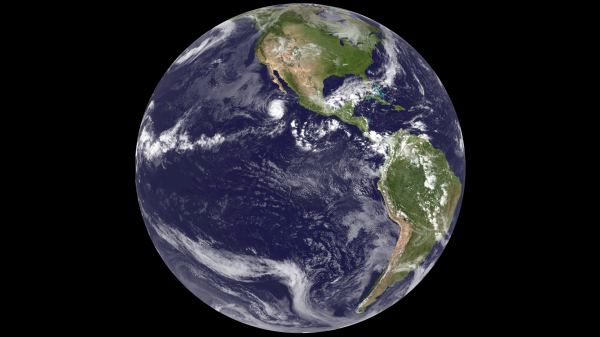 Here’s an image of Earth as seen by the GOES-14 weather satellite on September 24, 2012 at 1745z. It’s the first image from GOES-14 while acting as GOES East. Image Credit: NOAA

In a statement by NOAA:

GOES-14 will remain the primary GOES satellite over the Atlantic basin and continental U.S. until the imager and sounder data issues on GOES-13 can be fully diagnosed and hopefully fixed.

NOAA will drift GOES-14 to the location of GOES-13 at 75 degrees West. The drift will roughly be 0.90 degrees per day eastward. It will likely take the entire month of October until for GOES-14 to reach its destination.

Originally, when GOES-13 was taken offline, NOAA temporarily used GOES-15 satellite at 135 degrees west to cover at least part of the GOES-13 function. Afterwards, they decided to use GOES-14 since it is unknown to whether or not GOES-13 will ever be well again. As the eastward drift continues, those who look at satellite imagery of the U.S. East and Atlantic Ocean could occasionally come across navigation errors throughout October. 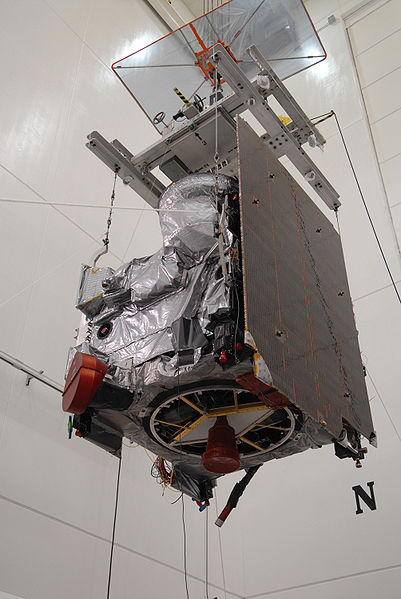 GOES satellites not only provide us beautiful imagery of our planet Earth, but they also provide data and information on weather systems that we can use to help forecast and predict our weather. Without these satellites, we would lose a lot of information that could impact millions of lives.

A few months ago, I wrote a post about how we may begin to see a rapid decline in U.S. satellites in the near future. According to a report from the National Research Council in early 2012, U.S. satellites in orbit are expected to decline from 23 in 2012 to only six in the year of 2020. Long-running missions to build and launch satellites are undergoing delays, missions are being cut as budgets are cut, and there have been some inevitable launch failures, plus changes in mission design and scope.

GOES-13 was launched in 2006 and became the operational weather satellite for GOES-EAST on April 14, 2010. GOES-13 was designed to operate for at least 10 years. However, as we can see, that may not happen. 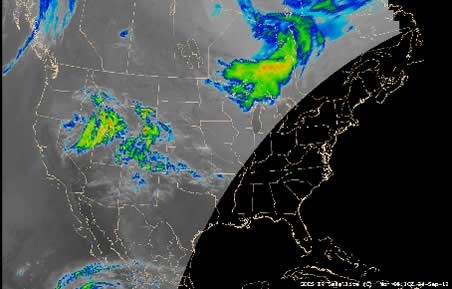 When GOES-13 went on standby, its weather coverage in the U.S. East and Atlantic went dark. Fortunately, other weather satellites have been able to replace it. Image via CIMSS Satellite Blog

Bottom line: The GOES-14 weather satellite is drifting 0.90 degrees per day to the east and will likely take the entire month of October until it reaches its destination, which is where the GOES-13 weather satellite – which it is replacing – is located now. It is unknown if NOAA will be able to repair GOES-13. As of now, it sounds unlikely, but we will have to wait and see.

Rapid decline in U.S. satellites could be costly