How these spooky-sounding animals got their names.

Some animals have spooky-sounding names, such as goblin sharks, ghost crabs and vampire bats. Here are some interesting facts about these animals for your Halloween reading pleasure. 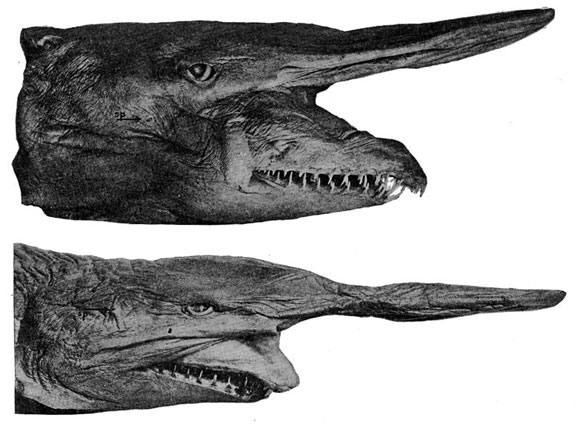 Goblin sharks are a rare and unusual looking species that lives in the deep sea. They have long flattened snouts, protrusible jaws and sharp narrow teeth. Their snouts are covered with numerous jelly filled pores that act as electroreceptors to help them detect prey in the dark depths of the ocean. When a fish, squid or crustacean—favorite prey items of the goblin shark—swims too close, the shark’s jaw snaps outward at a lightning-fast speed to grab the unsuspecting animal. Not to worry, goblin sharks do not pose any threat to humans because of the depths at which they live.

Goblin sharks also look unusual because they are pink in color, which is caused by blood vessels that lie close to the surface of their skin.

Goblin sharks grow to an average size of 3–4 meters (10–13 feet), but larger individuals have been found such as a 5–6 meter (18–20 feet) long female that was discovered in the Gulf of Mexico in 2000. They inhabit all of the world’s major oceans.

The name “goblin shark” is derived from a translation of its Japanese name, tenguzame. In Japanese mythology, tengu are beings that have long noses and red faces.

Ghost crabs are common crabs that live on the sandy shores of tropical and subtropical beaches. They are most active at night and have large eyes located on the tips of stalks, which allows them to see everything within 360 degrees. Another characteristic feature of ghost crabs is that one of their claws is larger than the other one, although this feature is not as pronounced as it is in their close relative, the fiddler crab.

Ghost crabs dig deep burrows in the sand. This helps them to avoid predators and to stay cool in the summer and warm in the winter. They periodically emerge from their burrows to feed and wet their gills in seawater. They also enter the ocean on occasion to release eggs.

According to the Encyclopedia of Life, the name “ghost crab” is derived from the crabs pale color and nocturnal behavior. Their scientific name Ocypode means “swift-foot” in reference to the fast speed at which they can dash around on the beach. Typically, these crabs move around on four pairs of walking legs, but at high speeds they run using only the first and second pairs.

Of course a Halloween science blog about spooky sounding animal names wouldn’t be complete without mentioning the vampire bat.

Vampire bats range from Central to South America and they feed on the blood of livestock and other forest animals, hence their name. These bats have a short muzzle and razor sharp teeth, which they use to make a small incision in sleeping prey. They then lap up the blood that flows out of the wound. Their saliva contains special anticoagulants that prevent the blood from clotting. While creepy, the loss of blood does not usually harm the prey.

Vampire bats live in large colonies in dark places such as caves or hollow trees. These bats form strong social bonds. If one bat is starving from a lack of food, other bats will sometimes regurgitate their blood meal to help feed the hungry bat.

Let us know if you can think of any other animals with spooky sounding names. I’m sure there are more out there!

(hat tip to Maureen Conners for suggesting that I write about this fun topic).

Lifeform of the week: Vampires are real

Find the Ghoul Star of Perseus