Two pieces of shark news this week, the first related to a rare species of deep-sea shark called a goblin shark and the second related to Greenland sharks. You can see goblin sharks (Mitsukurina owstoni) in the unprecedented video above, used here by Discovery Canada on YouTube, but also part of a recent scientific study. Notice the dramatic protruding jaw movements of these sharks as they snatch and swallow their prey. In the study, scientists led by Kazuhiro Nakaya of Hokkaido University in Japan published a detailed description in Scientific Reports of what they called the slingshot feeding technique of these sharks.

For their analysis, Nakaya and his team used video obtained by NHK, Japan’s largest broadcasting organization, of live goblin sharks in the wild. The broadcasters obtained the video of one specimen in 2008 and the other in 2011.

In the video, a goblin shark’s jaws appears to extend out of its mouth, lunging startlingly towards its prey. In their analysis of the NHK video, the scientists measured speeds as high as 10 feet per second (3 m/s), the fastest-known jaw movement of any fish. The jaw protrusions of the sharks were also impressive, measuring 8.6 to 9.4 percent of body length, the longest-known jaw protrusion of any shark species.

In studying the video, Nakaya and his team also discovered that for reasons yet to be known, goblin sharks also opened and closed their mouths while retracting their jaws. 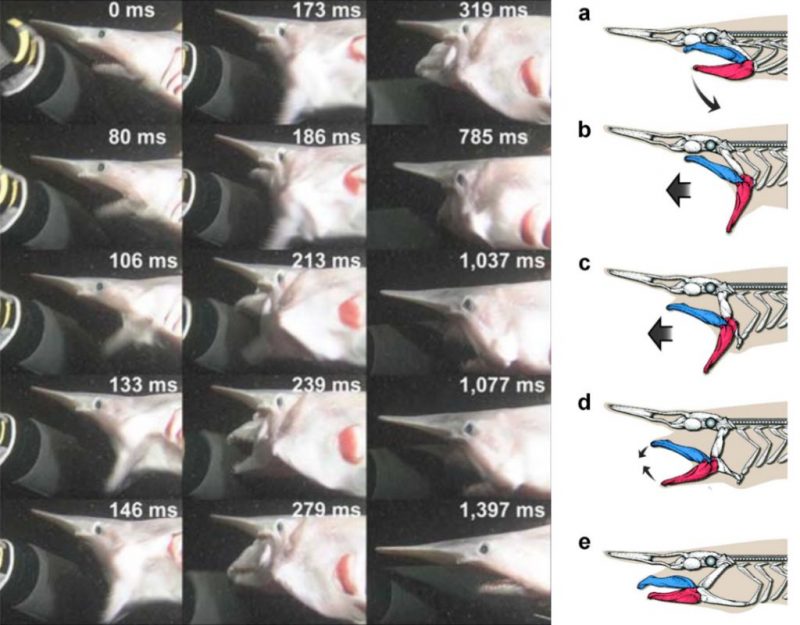 A photo montage of 15 still frames, from video taken in 2008, shows a juvenile goblin shark grabbing the arm of a diver. These images span a 1.397 seconds interval. The jaw movement itself, depicted in the illustrations labeled a to e, occurred within 0.3 seconds. Photo stills courtesy of NHK; illustrations courtesy of Hokkaido University.

Adult-sized goblin sharks are about 10 to 13 feet (3 to 4 meters) in length. Their soft flabby body’s pinkish hue is caused by blood vessels below the skin.

Found at depths greater than 330 feet (100 meters), goblin sharks prey on fish, squid and crustaceans. Their rapid slingshot feeding jaws may have evolved to compensate for their sluggish swimming speeds. 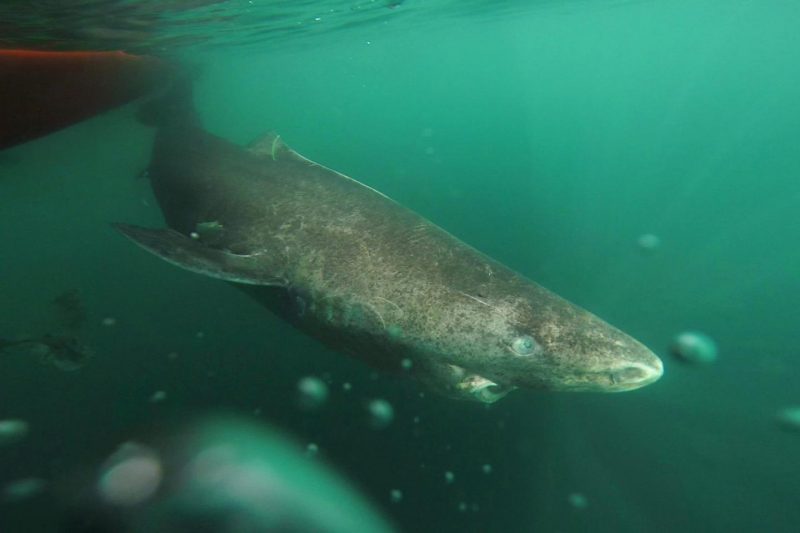 A Greenland shark in the Uummannaq Fjord in northwestern Greenland. This individual was part of a tag-and-release program in Norway and Greenland. Image via Julius Nielsen, University of Copenhagen.

Now on to news about Greenland sharks (Somniosus microcephalus). These sharks, found in the North Atlantic Ocean and Arctic Ocean, grow very slowly, but can exceed 16 feet (about 5 meters) in length. That’s why marine biologists have long suspected that these enigmatic sharks have a long lifespan. A new study – published in the August 12, 2016 issue of Science – presents evidence that these sharks have the longest known lifespan of all vertebrates. They live to be almost 400 years old!

Julius Nielsen, a PhD student in marine biology at the University of Copenhagen in Denmark, was the lead author of the paper. He said, in a statement:

Our lifespan study is based on the carbon-14 dating of Greenland shark eye lenses. As with other vertebrates, the lenses consist of a unique type of metabolically inactive tissue. Because the center of the lens does not change from the time of a shark’s birth, it allows the tissue’s chemical composition to reveal a shark’s age. We use well-established radiocarbon methods, but combine them in a new way.

This approach, along with the extraordinary ages for these sharks makes this study highly unusual.

Just how extraordinary are the ages of Greenland sharks? Nielsen and his team studied the eye lenses of 28 sharks that were fisheries by-catch. The average lifespan of the animals was at least 272 years. Two of the largest specimens, measuring over 16 feet (5 meters), were estimated to be 335 and 392 years old.

Previous research has indicated that Greenland sharks reach adulthood at lengths of over 13 feet (4 meters). Based on data from this new research, these sharks become sexually mature around 150 years of age.

Clearly, these results have important implications for setting up a sustainable management plan for Greenland sharks. Nielsen commented:

Greenland sharks are among the largest carnivorous sharks on the planet, and their role as an apex predator in the Arctic ecosystem is totally overlooked. By the thousands, they accidentally end up as by-catch across the North Atlantic, and I hope that our studies can help to bring a greater focus on the Greenland shark in the future. 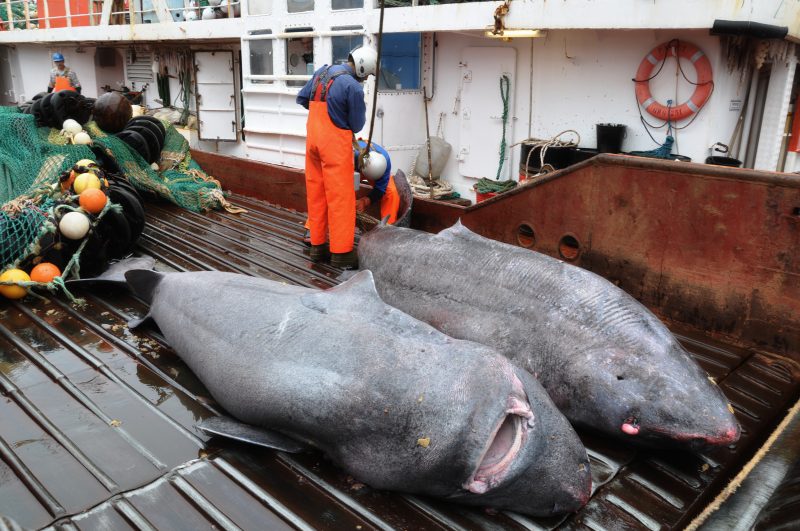 Bottom line: In the latest shark news, Greenland sharks have been identified as the oldest-known living vertebrates, with one individual found to be almost 400 years old. In other news, using unprecedented video, Japanese scientists have described the extraordinary “slingshot feeding” technique of live goblin sharks.