Last below-average temps for month of June were in 1976. If you’re younger than 28, you’ve never experienced a June with global temps below the 20th century average.

Temperature difference from average during June around the globe. NASA map via Capital Weather Gang.

Who saw above-average temperatures for the month of June 2013? According to NCDC, the spots that had above-average temperatures included much of northern Canada, far northwestern Russia, southern Japan, the Philippines, part of southwestern China, and central southern Africa. Areas that saw below average temperatures included central Asia, central India, western Europe, and far northeastern Canada. In the map above, you can clearly see the spots that were below and above average for the month of June. The June global land temperature was the third-highest on record at 1.89° Fahrenheit above the 20th century average.

Temperatures across the ocean were also above average, with record warmth observed in parts of the Arctic Seas, part of equatorial western Pacific, the central Sea of Okhotsk, and a region in the central southern Pacific. Meanwhile, temperatures were above average in the western Pacific Ocean. ENSO, or the El Niño Southern Oscillation is still neutral, meaning temperatures are about average across the eastern Pacific with no signs of an El Niño or La Niña forming anytime soon. The June global sea surface temperature was 0.86° Fahrenheit above the 20th century average, making it the 10th warmest June on record. 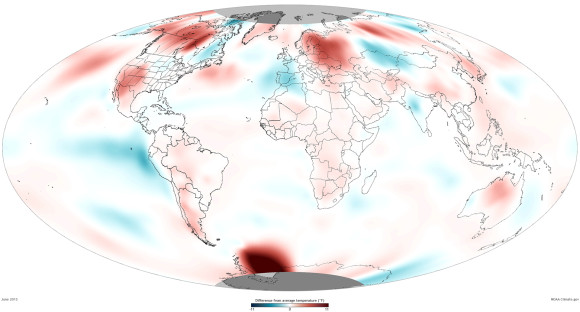 The highest rainfall totals with above average precipitation occurred across thee eastern United States, parts of New Zealand, and through much of India. In fact, India had record rainfall that was 27 percent above the 1951–2000 average. According to the NCDC, Northwest India received nearly double (+97 percent) its June average. Parts of northern India received devastating flooding, especially in Uttarakhand. Areas that experienced below average precipitation included southeastern Algeria, eastern Niger, parts of the Ivory Coast and Ghana in Africa, the southwestern United States, parts of eastern Australia, and far northwestern Russia.

Bottom line: June 2013 ranked as the fifth-warmest June recorded since record keeping began in 1880, according to the National Climatic Data Center. The last time we experienced below-average temps for June was back in 1976. If you are younger than 28 years old, you have never experienced a month where global temperature were below the 20th century average.