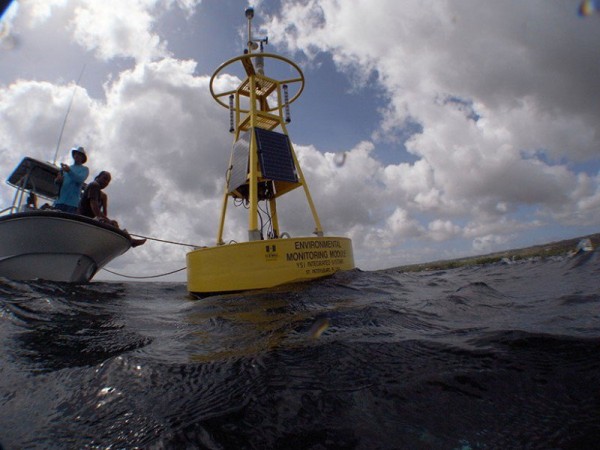 A shift during the last couple of decades to greater use of buoys for measuring sea surface temperatures might have caused reports of a so-called global warming hiatus. That’s because buoys tend to give cooler temperature readings than measurements taken from ships. When a new study corrected for this discrepancy, the “hiatus” goes away. Image via NOAA/CREWS.

You’ve probably read in recent years that global warming has slowed, or even paused. A handful of studies indicated this apparent pause, but more thorough research – published June 5, 2015 in the journal Science – suggests the so-called global warming hiatus was what some scientists are now calling “a temporary mirage.” Researchers report that – contrary to slowing or stopping – the Earth continued getting warmer at a rate very nearly like that predicted by climate models throughout the first early years of this century.

The Intergovernmental Panel on Climate Change (IPCC) – charged with bringing climate change science results to a global audience – reported in 2013 that warming between the period of 1998 to 2012 was much slower than the period 1951 to 2012. In other words, according to the IPCC, Earth was still getting warmer, but not at the rate projected by climate models.

Now, however, it appears possible that the earlier results suggesting a hiatus resulted from a shift during the last couple of decades to greater use of buoys for measuring sea surface temperatures. Temperatures collected by the buoys were being used in the global temperature records maintained by the U.S. National Oceanic and Atmospheric Administration (NOAA), one of four major keepers of records on global temperature along with NASA, the Japanese Meteorological Agency and the UK Met Office. NOAA had recently increased its coverage of sea surface temperatures by 15% by adding buoys.

Thomas Karl, director of NOAA’s National Centers for Environmental Information in Asheville, North Carolina and lead author on the new study in Science, said that buoys tend to give cooler readings than measurements taken from ships, which, by the way, take their measurements via the temperature of water taken in by a ship’s engine as a coolant.

So the apparent global warming hiatus might have been a temporary glitch in scientists’ understanding of the data being collected.

Even before this study appeared, 2014 ranked as the warmest year on record, according to NOAA.

Overall, it’s not easy to take Earth’s temperature. To do it, scientists have to combine hundreds of thousands of measurements from Earth’s land and oceans. Instruments on land, ships sea and ocean-going buoys, and orbiting satellites, all contribute to the temperature record. Scientists working with these data have to correct for differences in how each type of instrument measures temperature.

Karl and his team took into account the fact that buoys read colder temperatures than do ships in the same places by adding 0.12°C to each buoy measurement. Then they combined their new ocean data with improved calculations of air temperatures over land around the world, including from new land-based monitoring stations that extend into the Arctic, where observations have been sparse. And they also included observations from 2013 and 2014 (which, so far, holds the record as the warmest year on record).

They concluded that overall global surface warming during 2000–2014 was 0.116°C per decade, more than twice the estimated 0.039°C per decade that IPCC had reported for the period beginning in 1998.

Karl said that the warming rate would likely go up once his team calculates the temperature increase for the entirety of the Arctic, which is known to be warming rapidly.

The bottom line is that the IPCC reported that the rate of warming was less in the last 15 years than it was in the previous 30–60 years.

That is no longer valid according to our data.

A June 4 article in Nature pointed out:

NOAA’s updated temperature record still shows cooler observed conditions than those projected by most climate models for the same period. But Karl says that the warming trend is clear up to the end of 2014.

Steven Sherwood, director of the Climate Change Research Centre at the University of South Wales, Australia, who not involved in the study, told EOS:

The [new] data still show somewhat slower warming post-2000 than in the preceding decades, but the difference is no longer statistically significant, which means it is no longer justifiable to say that there was a ‘hiatus.’

The fact that such small changes to the analysis make the difference between a hiatus or not merely underlines how fragile a concept [the hiatus] was in the first place.

This chart shows global temperature analysis since the 1880s – prior to the results of this new study – by the four major world temperature-measurers – NASA, NOAA, the Japanese Meteorological Agency and the UK Met Office. Via NASA GISS

Bottom line: Studies reported by the IPCC in 2013 had suggested that global warming slowed or paused during the period of 1998 to 2012. More thorough research shows the global warming “hiatus” likely never happened, but instead was caused by a failure to account for cooler temperature readings collected by ocean buoys, whose presence in the oceans had increased during the same period.