It is time for another edition of looking at the tropical cyclones currently spinning around the globe. All three major basins: western Pacific, eastern Pacific, and the Atlantic have had an increase in activity this past week. The Western Pacific typhoon season has been fairly active as tropical storm Haikui pushed into China on August 7, 2012, just south of Shanghai. In the Atlantic, Tropical Storm Ernesto was upgraded into a Category 1 hurricane with sustained winds of 85 miles per hour as it made landfall in the Yucatan Peninsula, just north of Belize late on August 7, 2012 at 10:15 PM CDT. Meanwhile, in the eastern Pacific, Tropical Storm Gilma has formed, but it should not be a threat to land. Will there be new tropical development in the near future? Will there be a significant cyclone that could impact land – possibly impact you – this upcoming week? Find out here! 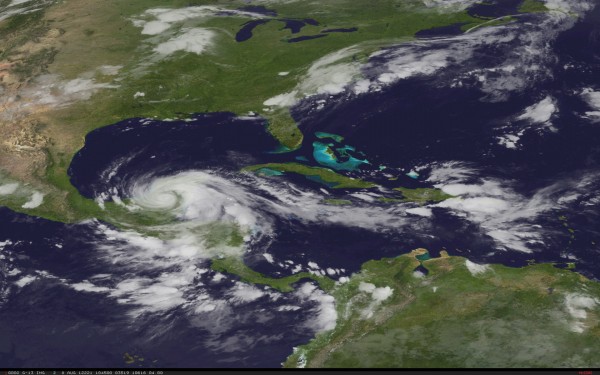 In the Atlantic Ocean, the main focus for the past week was Tropical Storm Ernesto. Ernesto formed as a depression on August 1, 2012 and became a tropical storm on August 2, 2012. For the next five days, Ernesto had a difficult time developing into a stronger cyclone due to dry air to the west of the circulation, a fast forward speed that did not allow the storms to build and intensify around the center of circulation, and trade winds that brought shear to the system. As it emerged into the western Caribbean, Ernesto began to intensify, and by August 7, 2012, Ernesto became a Category 1 hurricane with sustained winds of 85 mph and with a barometric pressure of 980 millibars. As of now, we have not heard any reports of injuries from this system, but it likely produced winds strong enough to cause minor damage in the western Caribbean. Ernesto will continue to weaken as it stays overland and pushes to the west into the eastern coast of Mexico. It will likely not regain hurricane strength as the interaction of land will not allow for strengthening.

Radar view of Ernesto pushing into the Yucatan Peninsula:

The National Hurricane Center is currently watching the remnants of Tropical Storm Florence, a disturbance in the eastern Atlantic ocean, and a very strong vigorous wave emerging off the African coast for further development. The GFS model indicates more systems developing in the middle of August. As mentioned before, the peak of the hurricane season occurs in early and mid-September. As of now, it is too far off to tell whether or not something will form and possibly affect land areas. The best advice is to already have a plan and be prepared!

In the Eastern Pacic, Tropical Storm Gilma is spinning in the open waters and will not affect any land areas. As of now, sustained winds are just below hurricane strength at 70 mph. The storm will continue to push to the northwest over the open waters of the Pacific and eventually weaken as it moves into cooler sea surface temperatures. Gilma could become a minimal hurricane within the next 24 hours, but the NHC only shows a peak in strength around 80 mph in the next 24 hours. Meanwhile, another system could develop to the southeast of Gilma. Some models are even hinting that the leftover remnants of Ernesto in the Atlantic could push into the eastern Pacific and possibly develop. Whether or not that will happen is unclear. However, I would suspect that the mountainous terrain over Mexico will truly dissipate the remains of Ernesto as it pushes west.

The main threat across the Western Pacific is Typhoon Haikui, the eleventh typhoon of the year, weakened into a tropical storm as it pushed into China on August 7, 2012. Typhoon Haikui made landfall in Hepu Township, Xiangshan County near the Sanmenwan Gulf in central Zhejiang at 3:20 a.m. on August 7. The storm was just south of the major city of Shanghai. Provinces in the area evacuated 1.5 million people in advance of Haikui pushing into the country. Heavy rain will be the primary threat across the area as the system is practically stalling across the area. Outside of Haikui, Tropical Storm Kirogi is spinning in the open waters of the western Pacific and is not expected to develop into a typhoon as ocean temperatures will gradually cool as it pushes to the northwest. Long range models hint at another system developing within the next seven days, however intensity and track is still highly uncertain. It is important to note that activity in the western Pacific is usually more active than the Eastern Pacific and Atlantic hurricane season.

Bottom line: The first week of August 2012 saw Hurricane Ernesto push into the Yucatan Peninsula and Tropical Storm Haikui push just south of Shanghai, China. Neither system was too strong, but both provided heavy rains and strong winds that caused minor problems in these regions. Meanwhile, the Atlantic ocean appears to remain very active as we are currently watching three tropical waves that have a chance to develop into a tropical system. In particular, the vigorous wave emerging off the African coast is the one to watch. Fortunately, we have plenty of time to monitor this area of low pressure as it travels the Atlantic ocean.