A look around the globe of tropical activity. Only immediate threat for now is across southeast China as Tropical Storm Kai-tak pushes to the northwest.

It’s August 15, 2012, time for another edition of the tropical cyclone update around the globe. The tropics are fairly quiet as of now, but the main focus will be across the western Pacific as Tropical Storm Kai-tak approaches China. It seems like China has been getting hit almost every week now by tropical cyclones that are producing decent amounts of rainfall. Meanwhile, the Atlantic basin is relatively quiet for the middle of August. Only two areas are being monitored for possible development, and one system could be our next named storm of the 2012 Atlantic Hurricane Season. In this post, we’ll look at what is out there, and what could form in the near future.

In the Western Pacific, the main concern is Tropical Storm Kai-tak. As of now, it has sustained winds around 50 miles per hour, and has already pushed through the northern portions of the Philippines. The forecast for Kai-tak is for the system to continue pushing to the west-northwest and possibly become a minimal typhoon with sustain winds around 75 mph as it pushes through parts of Hong Kong by the evening of Thursday, August 16, 2012. The main threat Kai-tak will bring to parts of southeast China will be heavy rains and possible flooding in the region. It is important to note a lot of the rains that occurs across eastern China typically happens during the summer months when tropical systems push ashore. Looking at the long-range models, there do not seem to be any immediate threats that will form within the next week. There will be tropical waves across the Pacific, but there are not any indications of anything forming into a strong typhoon.

Possible track Kai-tak will take within the next five days. Should push near Hong Kong in the next 24-36 hours. Image Credit: Joint Typhoon Warning Center

Possible areas that are worth watching in the Atlantic basin. Image Credit: National Hurricane Center

In the Atlantic, there are two areas the National Hurricane Center is focusing on for possible development. The first area is from the remnants of Tropical Depression seven that has pushed all the way towards western Honduras and the coast of Belize as a tropical wave. It encountered a very tough environment as it pushed west this past week, and it was unable to hold together to organize into anything. Dry air and wind shear were the biggest contributing factors, which are two things tropical systems do not like when it comes to gaining organization and strength. In fact, this could be a hint in the future as systems form and push westward as a weak El Niño forms in the eastern Pacific. El Niño can actually increase the wind shear in the tropical Atlantic ocean, and it makes conditions less favorable for tropical development. Surprisingly, NOAA released an updated forecast for an increase in tropical activity for the Atlantic on August 9, 2012 stating the following predictions:

Originally, NOAA had a forecast for 9-15 named storms, with 4-8 hurricanes, and 1-3 major hurricanes. Personally, I believe storms that do develop will form close to home, or off the coast of the United States due to stalled fronts that form areas of low pressure. Systems that form like this are typically weak, and can be difficult to forecast. Over the past week, it seems like the weather pattern has shifted more into a September pattern where large troughs dig southward into the Gulf states and bringing slightly cooler weather and lower humidity as far south and east as north Georgia and South Carolina. Systems like these are not common in the month of August, but become more pronounced as you enter September and especially October. So in summary, I think we’ll see “home brew” tropical development. These are the systems that could possibly affect land areas. If storms form early and near the Cape Verde Islands, then I give about a 70% chance of those storms recurving out to sea and not avoiding land areas. However, they could push as far west as Bermuda, so that is always a possibility. Tropical systems that strengthen typically gain latitude and push further north. The only way a system would not push north is if a large area of high pressure was to the systems north, and forces the system to stay on a westward track. 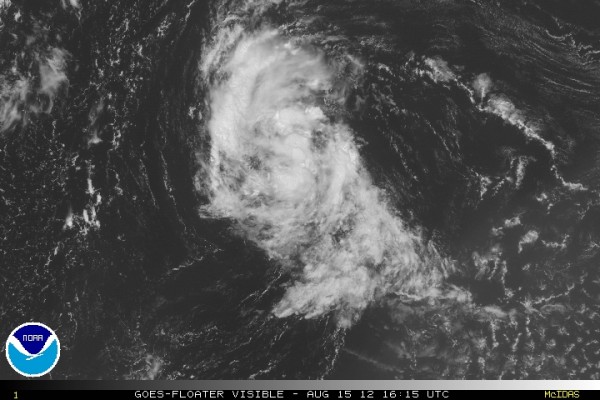 93L in the Atlantic that could become our next tropical depression. It is currently over open waters and approximately 700 miles southeast of Bermuda. Image Credit: NHC/NOAA

Elsewhere in the Atlantic, there is a system roughly 700 miles southeast of Bermuda that is becoming more conducive for further development in the next 24 to 48 hours. In fact, the National Hurricane Center (NHC) gives this area of low pressure a high chance, or 80% probability that it will form into our next tropical depression. If it becomes a named storm, it will become the 7th named storm of the 2012 Atlantic hurricane season and be called “Gordon”. As of now, conditions appear favorable for further development, and I would not be surprised if it becomes upgraded as a depression by later tonight or tomorrow (August 16, 2012), especially if the system maintains convection. 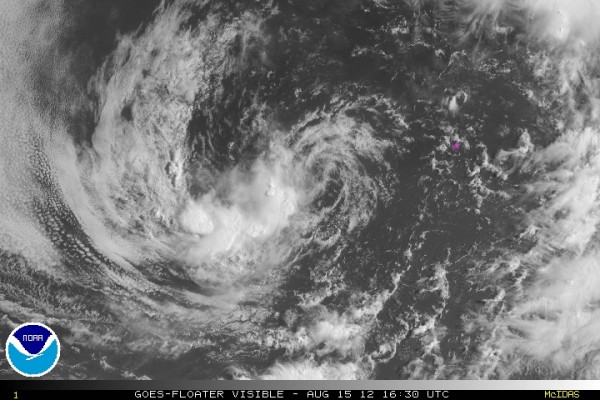 In the eastern Pacific, the only storm that we are monitoring is Tropical Storm Hector. Hector is an interesting storm because it actually formed from the remnants of Ernesto that affected parts of the Yucatan Peninsula and Mexico from last week. The remnants emerged into the eastern Pacific and became Hector. As of now, Hector is a sheared storm, which means winds are practically tearing the system apart. As of now, the forecast for Hector is for the system to push northward and weaken into a remnant low and eventually dissipate. Hector will not affect any land areas.

Bottom line: The main areas to watch will be Tropical Storm Kai-tak as it approaches Hong Kong and the organized storms southeast of Bermuda that could eventually become Tropical Storm Gordon. Meanwhile, Tropical Storm Hector will dissipate as it encounters more wind shear and cooler sea surface temperatures in the eastern Pacific. Models do not indicate any immediate concern regarding significant development of tropical systems around the globe for now. However, as we enter the peak of the hurricane season, activity will likely continue to develop. We’ll have another update next week, and also include a look at one of the most powerful hurricanes to strike the United States: Hurricane Andrew.