A study reveals the origins of hidden underwater waves that can tower hundreds of feet. 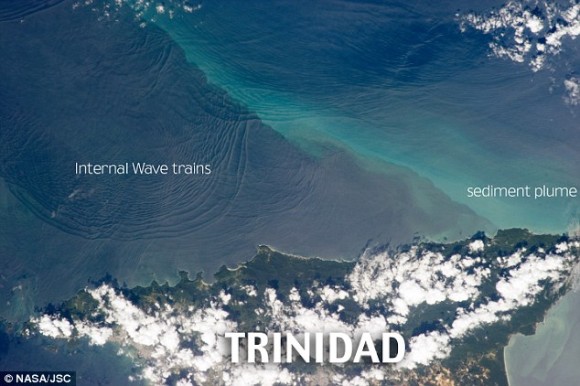 This astronaut photograph taken from the International Space Station (ISS) in February, 2013 shows the north coast of the island of Trinidad in the southeastern Caribbean Sea and the huge internal waves that are visible in the top left. Image credit: NASA/JPL

Internal waves are what scientists call underwater waves that are hidden entirely within the ocean. On the sea surface, they produce a rise of just inches that is virtually imperceptible. But these lumbering giants have been observed to reach heights of 170 meters (more than 550 feet) and have profound effects on the Earth’s climate and on ocean ecosystems.

New research has solved a longstanding mystery about exactly how the largest known internal waves are generated. These waves, in the South China Sea, are created by an entire ridge system on the seafloor, rather than a localized hotspot.

The new findings come from a team effort involving MIT and several other institutions, and coordinated by the Office of Naval Research (ONR). The research, published in the journal Geophysical Research Letters, was conducted in both in the ocean and in the laboratory.

Seen in cross-section, these waves resemble surface waves in shape. The only difference between an underwater wave and the water around it is its density, due to temperature or salinity differences that cause ocean water to become stratified.

Though invisible to the eye, the boundary between colder, saltier water below and warmer, less-salty water above can be detected instrumentally. That boundary layer can resemble the ocean’s surface, producing waves that reach towering heights, travel vast distances, and can play a key role in the mixing of ocean waters, helping drive warm surface waters downward and drawing heat from the atmosphere.

The research team studied the production of internal waves in the Luzon Strait, between Taiwan and the Philippines. MIT’s Thomas Peacock said:

These are the most powerful internal waves discovered thus far in the ocean. These are skyscraper-scale waves.

The team’s large-scale laboratory experiments on the generation of such waves used a detailed topographic model of the Luzon Strait’s seafloor, mounted in a 50-foot-diameter rotating tank in Grenoble, France, the largest such facility in the world. The experiments showed that these waves are generated by the entire ridge system on that area of seafloor, and not a localized hotspot within the ridge.

Scientists have come to a greater appreciate the significance of these giant waves in the mixing of ocean water — and therefore in global climate. Peacock said:

It’s an important missing piece of the puzzle in climate modeling … [these waves]are potentially “the key mechanism for transferring heat from the upper ocean to the depths.

Bottom line: New research by an MIT team suggests that Earth’s largest known internal waves, in the South China Sea, are generated by an entire ridge system on the seafloor, rather than a localized hotspot.