Super rare video of giant squid in US waters

Here be monsters. This video shows a living giant squid, captured on camera in its natural habitat for only the 2nd time in history.

NOAA researchers released the video above on June 21, 2019, while announcing that – for only the second time ever – they’d captured a giant squid on camera. Nathan Robinson was one of the scientists on a NOAA-funded expedition to the deep waters of the Gulf of Mexico. The team was about 100 miles (160 km) southeast of New Orleans, at a depth of 2,490 feet (759 meters), when he saw a tentacle, perhaps 10 to 12 feet (3 meters) long, rising up out of the inky black of his computer screen. At that point, he said, he was “captivated,” adding:

You feel very alive. There’s something instinctual about these animals that captures the imagination of everyone – the wonder that there are these huge animals out there on our planet that we know so little about, and that we’ve only caught on camera a couple of times.

The squid appeared to wrap its tentacles around the NOAA underwater stealth camera called the MEDUSA before quickly swimming away. Scientists cited the creature’s behavior as a normal reaction any animal would have to what, at first, appeared to be prey. 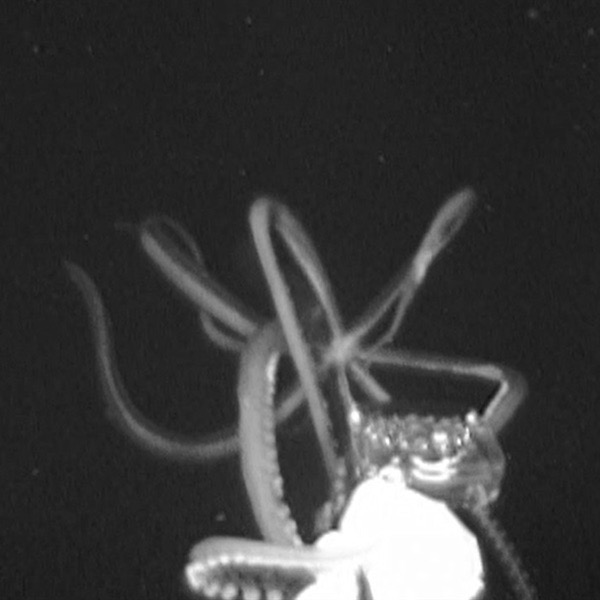 Here’s a close-up of the giant squid, as it tries to wrap its tentacles around NOAA’s underwater camera in the deep waters of the Gulf of Mexico. Image via NOAA.

The scientists on the ship sent the footage to Mike Vecchione, a NOAA Fisheries zoologist and an octopus-and-squid expert, who said he was “nearly certain” that it was a squid of the genus Architeuthis – a giant squid. NOAA explained:

‘Giant squid’ is a term that’s sometimes used to describe a range of larger squid specimens, but scientifically … only squids of the genus Architeuthis can be considered giant squid.

The benchmark is taxonomy, rather than size – it’s either genetically a giant squid or not. People will refer to other things as giant squids, but cephalopod biologists don’t. 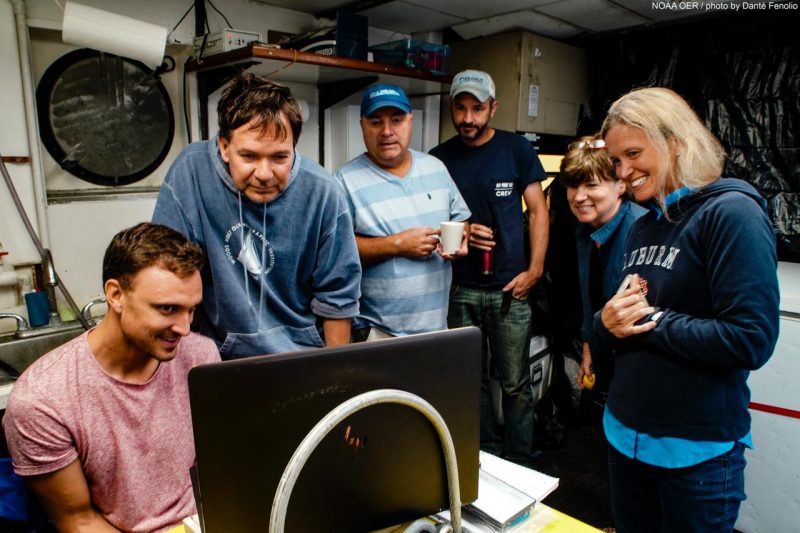 The new footage was captured by the MEDUSA, a camera system that’s designed to give scientists a glimpse into the deep ocean without disturbing the light-sensitive creatures that live there. It uses red light, which many deep-dwelling creatures cannot see, as well as a lure modeled off of a bioluminescent jellyfish. The lure is meant to attract larger predators: Since some jellyfish create bioluminescent displays when attacked, some large predators in the deep ocean look out for this ‘burglar alarm’ display, and show up to feed on whatever it is that’s disturbing the jellyfish. The MEDUSA first captured a giant squid on video in 2012 off the coast of Japan.

The two videos can teach scientists a lot about the giant squid. They were both captured at 2,490 feet [760 meters] below the surface, which means the squid lives in a world that’s very dimly lit. They show that giant squids are active creatures – they don’t float around and passively wait for food to drift by, which Vecchione said was a hypothesis at one time. They also have huge eyes – the largest eyes of any animal on the planet — and their attraction to the jellyfish lure means they’re visual predators.

Edie Widder, chief executive officer of the Ocean Research & Conservation Association and the developer of the MEDUSA technology, said:

In the video, we could clearly see that it was visually tracking the electronic jellyfish, which was very exciting to be able to observe.

NOAA also pointed out that that giant squids are “not uncommon” creatures. They wash ashore fairly regularly off the coast of northern Spain, because the noise involved in oil exploration there can be lethal to them. But viewing one in its natural habitat is rare, and NOAA called it:

… a testament to the contributions ocean exploration is making to the public understanding of the ocean.

"What were once monsters to be feared are now curious and magnificent creatures that delight. We like to feel that science and exploration has brought about this change."

Read the story of how scientists captured a giant squid on video: https://t.co/RUu2YkCDFS pic.twitter.com/J2ERl10blz

Bottom line: A NOAA-funded expedition has captured rare footage of a giant squid in the Gulf of Mexico. It’s the second time a giant squid has been captured on camera in its deepwater habitat.