A bird bigger than Big Bird wandered through the winter twilight of the high Arctic some 53 million years ago. 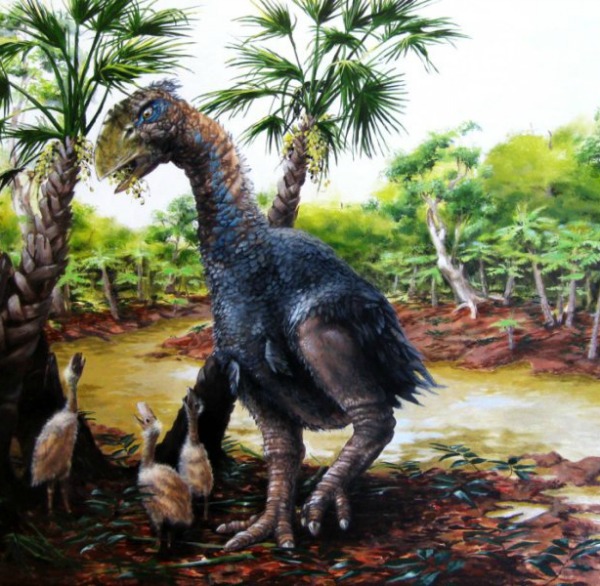 A new study has confirmed that a flightless bird weighing several hundred pounds roamed Ellesmere Island in the high Arctic about 50 million years ago. Image credit: Illustration by Marlin Peterson

A new study describes a bird bigger than Big Bird that once lived above the Arctic Circle. The flightless bird, known as Gastornis, roamed Ellesmere Island next to Greenland about 50 million years ago, even during the twilight months of winter. Once thought to be a menacing predator, Gastornis – which weighed several hundred pounds – was more likely a vegan that munched on foliage, nuts, seeds and fruits.

A new study about Gastornis by a team of researchers from the Chinese Academy of Sciences and the University of Colorado was published in the journal Scientific Reports on February 12, 2016.

The environment on Ellesmere Island 50 million years ago during the early Eocene Epoch was probably similar to cypress swamps in the southeast U.S. today, say the researchers. Fossil evidence indicates the Arctic island back then also hosted a menagerie of turtles, alligators, primates, tapirs and even large hippo-like and rhino-like mammals.

Today Ellesmere Island is one of the coldest, driest environments on Earth, where temperatures can drop to minus 40 degrees Fahrenheit in winter.

While the diversity of plants and animals on Ellesmere was surprisingly high in the early Eocene, one of the biggest challenges to life on the island may have been the Arctic winters.

Researcher Jaelyn Eberle is an associate professor in the geological sciences department at the University of Colorado, Boulder. Eberle said:

Since Ellesmere Island is high above the Arctic Circle, the lights still went out there for several months of the year, just as they do today.

In the new study, researchers described the first and only fossil evidence of Gastornis in the Arctic – a toe bone picked up on Ellesmere Island by a science team in the 1970s. Eberle said:

We knew there were a few bird fossils from up there, but we also knew they were extremely rare.

Bottom line: A study published in the journal Scientific Reports on February 12, 2016 describes a flightless bird, known as Gastornis, that roamed Ellesmere Island next to Greenland about 50 million years ago, even during the twilight months of winter.

Read more from the University of Colorado Boulder