If you encountered an elephant bird today, it would be hard to miss. At over 10 feet (3 meters) tall, the extinct bird is the largest known to science. But while you looked up in awe, it’s likely that the big bird wouldn’t be looking back. 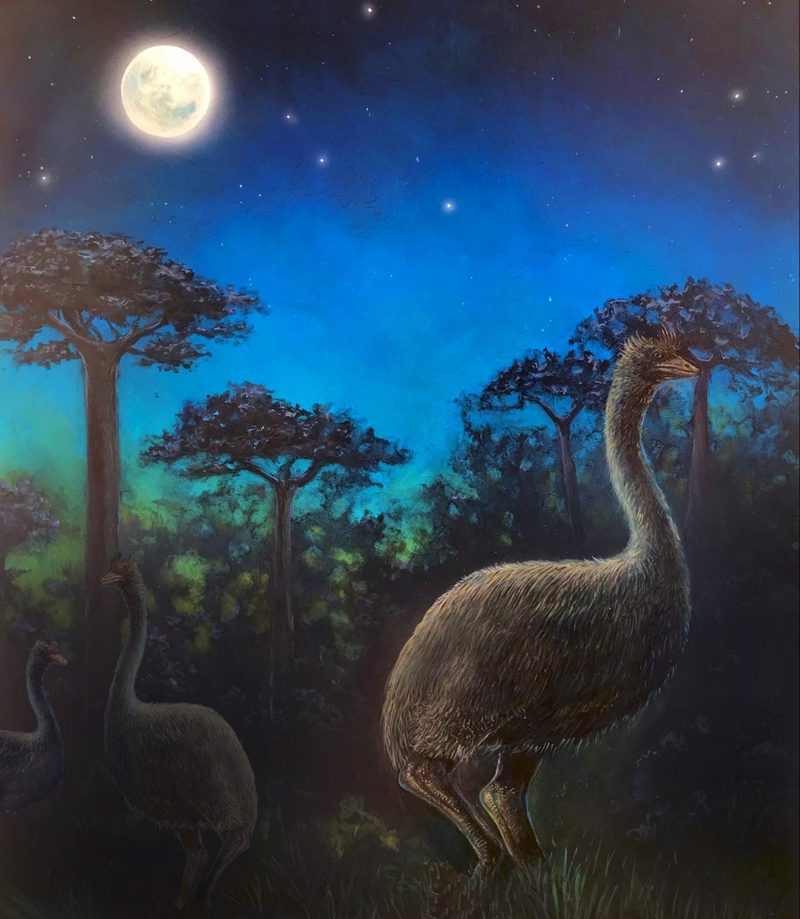 Artist’s concept of giant, nocturnal elephant birds foraging in the ancient forests of Madagascar at night. Image via John Maisano/University of Texas at Austin Jackson School of Geosciences.

The extinct elephant bird – the largest bird known to science – was nocturnal and possibly blind. That’s according to new brain reconstruction research that found that the part of the bird’s brain that processed vision was tiny.

A nocturnal lifestyle is a trait shared by the elephant bird’s closest living relative, the kiwi — a practically blind, chicken-size bird that lives in New Zealand. According to Christopher Torres of University of Texas at Austin, that’s a clue that is helping scientists learn more about the elephant bird’s behavior and habitat. Torres led the research, which was published October 31, 2018, in the peer-reviewed journal Proceedings of the Royal Society B. Torres said in a statement:

Studying brain shape is a really useful way of connecting ecology – the relationship between the bird and the environment – and anatomy.

Elephant birds were large, flightless and lived in what is now Madagascar until a mixture of habitat loss and potential human meddling led to their demise between 500 and 1,000 years ago. Torres said:

Humans lived alongside, and even hunted, elephant birds for thousands of years. But we still know practically nothing about their lives. We don’t even really know exactly when or why they went extinct.

A digital brain reconstruction of the recently extinct elephant bird revealed that its optic lobe was virtually absent, a trait that indicates it was nocturnal and possibly blind. The kiwi, the closest living relative of the elephant bird, also has an absent optic lobe, nocturnal behavior and very poor eyesight. In contrast, the tinamous, a distant elephant bird relative, has good eyesight and a prominent optic lobe. Image via Chris Torres/University of Texas at Austin.

Scientists had previously assumed that elephant birds were similar to other big, flightless birds, like emus and ostriches — both of which are active during the day and have good eyesight. But the new brain reconstructions suggest that elephant birds had distinctly different lifestyles. Read more about how the scientists conducted the study here.

Andrew Iwaniuk is an associate professor at the University of Lethbridge and an expert on brain evolution in birds who was not involved with the research. Iwaniuk said that he had a similar reaction to the findings.

I was surprised that the visual system is so small in a bird this big. For a bird this large to evolve a nocturnal lifestyle is truly bizarre and speaks to an ecology unlike that of their closest relatives or any other bird species that we know of.

Source: Nocturnal giants: evolution of the sensory ecology in elephant birds and other palaeognaths inferred from digital brain reconstructions

Via University of Texas Austin