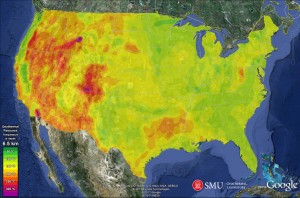 Sophisticated mapping produced from the research, via Google Earth, shows that vast reserves of this green, renewable source of power generated from the Earth’s heat are accessible using current technology.

SMU researchers released a paper with details of the research to the Geothermal Resources Council on October 25, 2011.

The results of the new research, from SMU geophysicist David Blackwell and geothermal lab coordinator Maria Richards, refine locations capable of supporting large-scale commercial geothermal energy production under a wide range of geologic conditions, including significant areas in the eastern two-thirds of the United States.

The estimated amounts and locations of heat stored in the Earth’s crust included in this study are based on nearly 35,000 data sites – approximately twice the number used for Blackwell and Richards’ 2004 Geothermal Map of North America.

Conventional U.S. geothermal production has been restricted largely to the western third of the country in tectonically active locations. For instance, The Geysers field north of San Francisco is home to more than a dozen large power plants that have been producing electricity by tapping naturally occurring steam reservoirs for more than 40 years.

Newer technologies and drilling methods can help develop resources in a wider range of geologic conditions and in regions not previously considered suitable for geothermal energy production. Preliminary data released from the SMU study in October 2010 revealed a geothermal resource under the state of West Virginia equivalent to the state’s existing power supply (primarily coal-based).

Both Google and the SMU researchers are fundamentally changing the way we look at how we can use the heat of the Earth to meet our energy needs and by doing so are making significant contributions to enhancing our national security and environmental quality.

This assessment of geothermal potential will only improve with time. Our study assumes that we tap only a small fraction of the available stored heat in the Earth’s crust, and our capabilities to capture that heat are expected to grow substantially as we improve upon the energy conversion and exploitation factors through technological advances and improved techniques.

In this newest SMU estimate of resource potential, researchers used additional temperature data and in-depth geological analysis for the resulting heat flow maps to create the updated temperature-at-depth maps from 3.5 kilometers to 9.5 kilometers (11,500 to 31,000 feet or 2.2 to almost 6 miles). This update revealed that some conditions in the eastern two-thirds of the U.S. are actually hotter than some areas in the western portion of the country.

Areas of particular geothermal interest include the Appalachian trend (western Pennsylvania, West Virginia, to northern Louisiana), the aquifer-heated area of South Dakota, and the areas of radioactive basement granites beneath sediments such as those found in northern Illinois and northern Louisiana. The Gulf Coast continues to be outlined as a huge resource area and a promising sedimentary basin for development. The Raton Basin in southeastern Colorado possesses extremely high temperatures and is being evaluated by the state of Colorado along with an area energy company.

In determining the potential for geothermal production, the new SMU study considers the practical considerations of drilling, and limits the analysis to the heat available in the top 6.5 km (21,500 feet, about 4 miles) of crust for predicting megawatts of available power.

Three new technologies have already sparked geothermal development in areas with little or no tectonic activity or volcanism:

1. Low Temperature Hydrothermal – Energy is produced from areas with naturally occurring high fluid volumes at temperatures ranging from less than boiling to 150°C (300°F). This application is currently producing energy in Alaska, Oregon, Idaho and Utah.

2. Geopressure and Coproduced Fluids Geothermal – Oil and/or natural gas are produced together with electricity generated from hot geothermal fluids drawn from the same well. Systems are installed or being installed in Wyoming, North Dakota, Utah, Louisiana, Mississippi and Texas.

3. Enhanced Geothermal Systems (EGS) – Areas with low fluid content, but high temperatures of more than 150°C (300°F), are “enhanced” with injection of fluid and other reservoir engineering techniques. EGS resources are typically deeper than hydrothermal and represent the largest share of total geothermal resources capable of supporting larger-capacity power plants.

Energy underfoot: Bringing up heat from inside Earth